"Greasy movie"
A seemingly harmless elderly couple have a surprise in store for a group of young thieves, in auspicious horror movie starring Maisie Williams - out on Monday, February 22nd

This domestic horror begins in a field overlooking a grand country house, as Nathan (Ian Kenny), Gaz (Jake Curran) and Terry (Andrew Ellis) wait for their moment to strike. They sit in a boxy red hatchback and use Nokia mobile phones, for this is the 1990s. However, the era becomes irrelevant when they enter the antiquarian property, an oaken time capsule miles from the nearest town. The rag-tag oiks plan on cracking the safe in the basement, owned by retired doctor Richard Huggins and his wife Ellen (Sylvester McCoy and Rita Tushingham).

However, the plan soon comes unstuck when their methods fail, so they decide to wait for the owners’ return. Meanwhile, Nathan’s girlfriend Mary (Maisie Williams) shouts from the car outside, wondering when she’s getting her lift to work. Instead, she’s cajoled into the house shortly before the owners arrive, implicating her in this rapidly escalating situation. 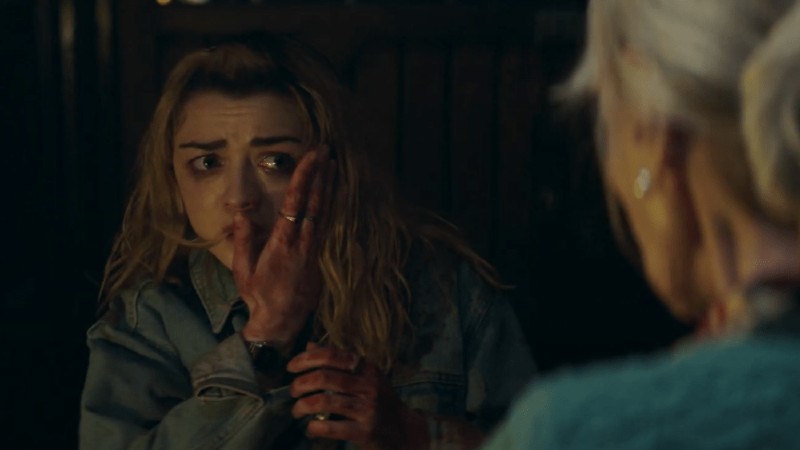 It is here that The Owners hits its stride. Richard and Ellen are forced into the basement, where Nathan demands the code at knifepoint. Advanced dementia has put Ellen into a child-like state, but Richard is as sharp as a tack. He sees that Nathan isn’t very good at this, that he is unsure of himself and unlikely to realise his threats. To Richard, it is clear that the real threat is Gaz, who shows a psychopathic readiness for violence. Director Julius Berg ratchets the tension very well as Richard plays the men against each other, using his eloquence to get under their skin. The threat of sadism becomes unbearable, conjuring brutal images in the viewer without actually showing them. It is vicious house invasion fare that will compel general audiences and genre enthusiasts alike.

However, the film loses this edge as events take a wildly different course. Let’s just say that the hunters become the hunted – the trailer will tell you that much. This reversal of fortune maintains some of the suspense and tension, but both are upended by the script’s improbable twists, removing you from both the story and the characters. The sturdy production values continue, as do the reliable performances, especially the erudite turn from Sylvester McCoy, who feels like the evil brother of Christopher Biggins. The net result is a film that’s all set-up, no conclusion.