"Dirty gem"
The real-life story of the picaresque British hero who stole a painting from the National Gallery for charitable purposes is doused in saccharine and yet enjoyable to watch - on BFI Player on June 18th; also available on other platforms

This is a movie about unsung heroes. Small heroes. Those who sacrifice the comfort of their home, their freedom and more in the name of social justice. These people often live next door to you without you knowing it.

In the year of 1961, sexagenarian Kempton Bunton (Jim Broadbant) enjoys a working-class life somewhere in suburban Newcastle alongside his wife Lylia Frances (Helen Mirren) and their son Jack (Fionn Whitehead). He looks like your average family guy: he’s avuncular, devoted to his relatives and spends most of his time watching television. Yet he’s not your average citizen: his unshakeable commitment to social justice has landed him in trouble with justice more times than one.

Years earlier, he did time time for refusing to pay his TV licence. He manually removed a coil from inside the device, thereby disabling the BBC. He argued that only watching ITV exempted him from the fee, but the courts begged to differ. His gesture was not one of stinginess, but instead of solidarity with all OAPs who have little money and few entertainment options. But this wasn’t his most notable “heroic” deed. On August 21st he stole the Duke of Wellington portrait by Francisco Goya, worth £140,000, from the National Gallery. The Duke of Wellington is a national hero, credited with winning the Battle of Waterloo. He intended to return the art piece and to use the “ransom” money for charitable purposes (such as paying for the TV license of thousands of elderly people). At one point, however, he realised that his plan wasn’t feasible and simply returned the painting to where it came from. He showed up at the National Gallery with the the wrapped up item under his arms. He then faced the inevitable legal consequences. At the Old Bailey even, attracting widespread media coverage. He was broadcast on the same television whose right he fought so hard to obtain. 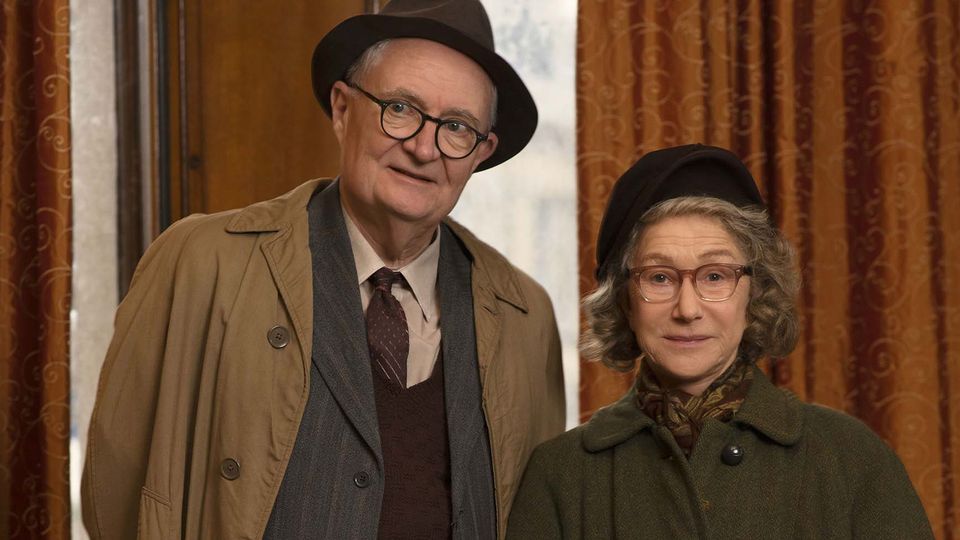 This blend of Robin Hood and Don Quixote (both the English and the Spanish picaresque heroes are referenced in the film) is extremely eloquent and likeable. Even the stern judges seem to harbour some sort of sympathy to him. He pleads not guilty (and this is not a spoiler, as the film opens up with his plea). It remains to be seem whether he can convince the jury that his noble intentions vouch for his innocence, thereby avoiding a lengthy prison sentence. The ending is rather surprising, with a very unexpected (and real) twist in store.

This is a highly romanticised account of someone who was genuinely selfless and kind. While the literary comparisons are appropriate, I wonder whether the attempt to paint him as an anti-racism hero (he gets fired for standing up for a Pakistani worker, passionately quoting Gandhi in front of his bosses and colleagues) may have been a step to far. His despondent wife compares him to Martin Luther King.

A hardly recognisable Helen Mirren shines as the Lilya, a woman split between the profound affection for her husband and the fear that her family will collapse. Overall, this is a feel-good comedy that will touch the hearts of all Brits who pay for their TV licence (and probably also those who don’t).

The Duke showed at the 77th Venice International Film Festival, when this piece was originally written. It’s on BFI Player on June 18th, 2022. Also available on other platforms.