"Dirty gem"
In Fyzal Boulifa’s directorial debut, the relationship between two high school friends and neighbours is tested when motherhood comes into view - British drama is on Digital from Thursday, July 2nd

Friendships involve celebrating the good times and weathering through the bad times. The friendship of the two titular character is cold and strained with devastating results. Lucy (Nichola Burley), a new mother to a baby boy with a ne’er-do-well husband (Samson Cox-Vinell), has some growing up to do; before the credits start to roll, she starts to get plastered at her son’s baptism celebration. Lynn (Roxanne Schrimshaw) is a mother to a pre-teen daughter in a fading marriage to a soldier on disability (Shaq B. Grant) who spends her days working at a local beauty salon. After a night away from motherhood at a local pub, both girls’ lives drastically change when a tragedy befalls on Lucy’s newborn baby.

As the melodrama unfolds, Lynn puts Lucy up at her house all the while speculating over Lucy’s validity as a stable mother. While at the hair salon, Lynn succumbs to the rumour mill spinning around the shop surrounding her friendship with Lucy echoing the catty tall-tales spun during her teenage years. As Lucy is treading emotional waters with alcohol and accusations made around the neighbourhood, Lynn is beginning to be accepted by the hair salon clique along with rekindling her strained relationship with her husband. 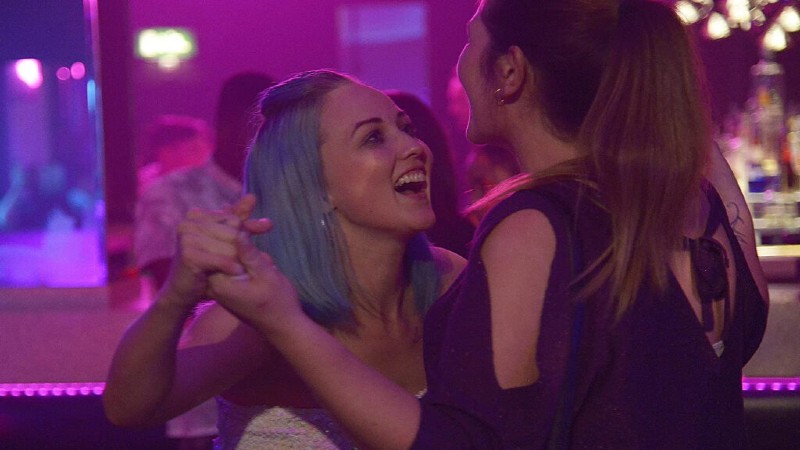 With his first feature film after being recognised for his Bafta-nominated shorts, Fyzal Boulifa presents a gritty, gut-punch story about friendship and loss echoing the same visual intensity as Lynne Ramsay’s We Need to Talk About Kevin (2011) and Ben Wheatley’s Down Terrace (2010). What starts as a jovial, slice-of-life story in the same vein as Mike Leigh dives into a heart-wrenching and horrific tale of suspicion and loss. The images of burnt cigarettes in ashtrays exemplify the growing cynicism and division between Lynn and Lucy. When asked about developing the story, Boulifa says, “I was thinking about this idea that we find our identities by creating a kind of ‘other.’”

In the case of Lynn, she attempts to find some sense of optimism out of Lucy’s despair, which is where the film shifts into third gear as the turbulence and rockiness of Lynn and Lucy’s relationship is depicted with silent restraint and nail-biting intensity. Adding to this energy is cinematographer/editor Taina Galis’s. The camera eerily captures the shadows and light on Lynn’s face or the duplicitous nature of her connection with Lucy. In her acting debut, Roxanne Scrimshaw delivers a superb performance as the morally-conflicted Lynn as she balances out motherhood and recalling her adolescent-infused memories (myths?) about Lucy. Nichola Burley gives a devastating and heart-wrenching performance as a woman who mentally hasn’t left the schoolyard before becoming a mother.

This is not a movie for the faint of heart. Even at a 90-minute running time, the film is an emotional gauntlet that isn’t so much a nurturing tale about motherhood as it is a cautionary tale about the follies of youth leading to the faults of adulthood. The tasking and, at times, draining story reaches fever pitch with a barn burner of a twist ending.

Lynn + Lucy is out on BFI Player on Thursday, July 2nd.