"Filthy genius movie"
Ambition, love, and hip-hop combine to bring Lin-Manuel Miranda's masterpiece to the small screen - out on Disney Plus on Friday, July 3rd

What makes a period piece about a little known American founding father, told largely through the medium of rap, become a hit the world over? After a raft of awards, and record-breaking box office, a 2016 performance by the original Broadway cast is making its way to streaming service Disney Plus, having originally been intended for cinemas.

Aside from a brief introduction, we are thrown head-first into Miranda’s vision – more or less the Broadway production with dynamic camera work to make the experience more immersive. He plays Alexander Hamilton, a young orphan immigrant who makes an immediate impact when he arrives in the US, on the cusp of revolution from the British. We watch his ascent to prominence as the right hand man of George Washington, the loves of his life, and the restlessness that ultimately leads to his downfall. We also see the cordial rivalry with Aaron Burr (Leslie Odom Jr.), a contemporary who takes a different political approach.

On paper, it sounds like a spoof concept from The Simpsons: a history of the United States set to rap. Conservative feathers were ruffled at the predominantly Black and Latin American cast. But to look at Hamilton on paper is to miss the point – the concept is far from being a gimmick, it is a living, heart-stopping masterpiece that uses culture of the present to tell stories from the past. 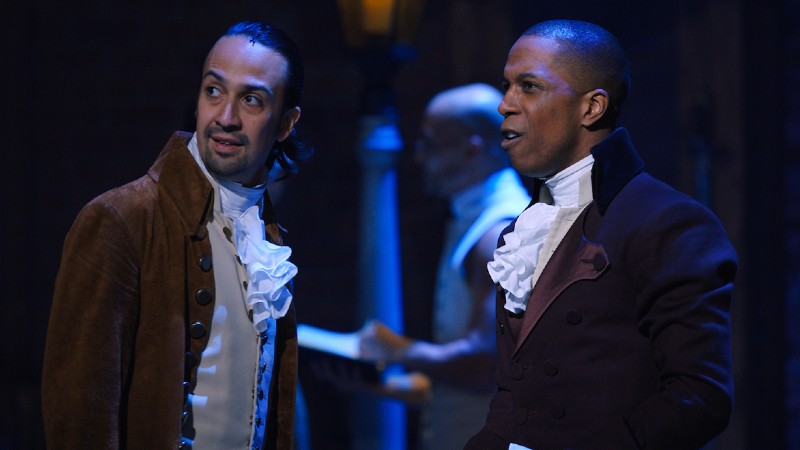 The musical isn’t necessarily telling a story about where the US came from, but of the motivations behind the people who made the country. It is about destiny, and the paths we take to meet it. Miranda darts around the stage as Hamilton, a man so possessed with his own destiny it pours out of him as he writes essays and argues in the street about the moulding of this new nation. By contrast, Odom’s Burr is driven by personal advancement and a policy of restraint (“talk less, smile more” he advises Hamilton in one early number). Romantically, destiny prevents Hamilton from being with his sister-in-law Angelica (Renée Elise Goldsberry).

Thr conflict between heart and fate is gripping. You may not care that much about military strategy, but you can empathise with Hamilton’s frustration at not being trusted with responsibility by Washington. You may not be fluent in the history of American government, but you can empathise with Burr, whose restraint crumbles as he realises his cautious approach leaves him always trailing behind his rival.

The music drives home the emotion of the piece. The choice of hip-hop conveys the revolutionary aspect of the times Hamilton lived in, imbuing scenes with a restlessness and excitement while other genres serve a different purpose. A debate becomes a rap battle, while an out of touch Thomas Jefferson (Daveed Diggs) arrives in the US to a boogie woogie number. Hysterically, Jonathan Groff’s King George III sings cheesy ballads to his lost colony like a scorned lover.

Watching the original Broadway cast, you see why so many have been snapped up by Hollywood. Anthony Ramos (from Bradley Cooper’s 2018 A Star Is Born) is magnetic as both Hamilton’s contemporary John Laurens and his son Phillip. Christopher Jackson creates a conflicted military hero in Washington. Miranda plays Alexander as a tangled ball of emotions, often singing through tears or gritted teeth. He eschews the bravado you’d expect from such a character for something more honest. He’s a true believer, driven forward not by ego but because he is being pulled by something greater.

Hamilton is available on Disney Plus from Friday, July 3rd.