"Filthy genius movie"
Forget Stockholm Syndrome! This German-flavoured kidnap is far more twisted than anything you've seen before - one of the dirtiest films of the year is out in cinemas Friday

This is one of dirtiest and most arresting films of the year. It will keep you on the edge of your seat for about two thirds of the action. A truly disturbing tale of male obsession and violence towards women, and the the disturbing façade of normality attached to it, set in the trendy and yet bleak and cold German capital. Berlin is a charmingly ugly and dirty place.

Clare (Teresa Palmer) is an Australian photojournalist visiting Berlin and trying to capture some of the city’s essence with her camera. As both a female and a foreigner who doesn’t speak the language, the actress conveys a sense of extreme vulnerability without coming across as clueless and stupid. There’s lingering fear in her eyes, even in the most trivial actions such as having a glass of wine or crossing the street. She soon falls for the handsome and charming local lecturer Andi (Max Riemelt, who you may recognise from playing Wolfgang in the Netflix series Sense8), who seems caring and doting at first. Until he locks her in his flat in a deserted building (there are many of those in Berlin, those familiar with the city will know), and turns her into some sort of wife and sex slave.

As time goes by, it becomes clearer that Andi has no intention of letting her go, and the violence escalates. Clare remains locked up as Andi carries on with daily routine of going to work, meeting friends and so on. He can also be kind and gentle to her, in an attempt to forge a relationship in his own head. Clare begins to play his game, as she devises an escape plan. 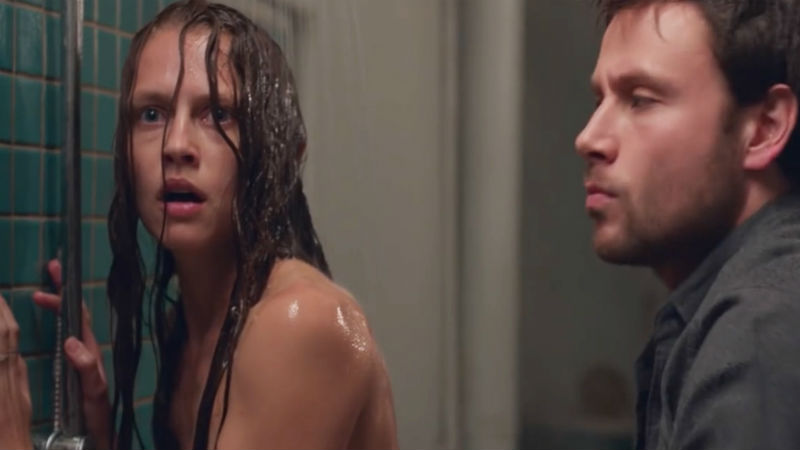 Berlin Syndrome is Polanskian in so many ways. There’s a splash of gaslighting from Rosemary’s Baby (1968), the psychotic mind of The Tenant (1976), the captivity of Death and the Maiden (1994), the female fear and vulnerability of Repulsion (1965), plus the deeply twisted sexuality from all of these films. The difference is that this time the filmmaker is a female, and her stroke is no less masterful. The gaze is never exploitative, instead the Teresa is often filmed from very unflattering angles, such as with protruding ribs. Clare doesn’t paint a golden girl in good Gustaf Klimt style. She’s much more Schiele – in fact his paintings even feature in the movie.

The action is supported by a subtle sound score and excellent sound engineering. Excellent attention is paid to the panting, squelching, slamming and so on. Just about enough to keep you tense and hooked, without spoiling the experience.

The dirtiest aspect of Berlin Syndrome is that, unlike in the syndrome named after the Swedish capital, the victim here does not gradually begin to identify with her kidnapper. The frail and vulnerable foreigner here defies all expectations and instead morphs into a headstrong escapee. It’s remarkable that female directors are embracing the male-dominated field of suspense and horror, and to dirtylicious results. We recommend that you also watch Julia Ducarnou’s French horror Raw, released earlier this year.

Berlin Syndrome is out in cinemas across the UK on Friday, June 9th. It’s the perfect treat for a first date, as long as you don’t let him/her take you home afterwards.