The House Of Us (Woori-Jip)

"Greasy movie"
Prepubescent girl forms a surrogate family, as she watches the relationship between her parents collapse – from the BFI London Film Festival and the London East Asia Film Festival (LEAFF)

Eleven-year-old Lee Hana (Kim Na-yeon) watches her mum and dad argue. The family should be having breakfast, but instead mum finds ways to berate dad every time he opens his mouth. She has a brother, but doesn’t get on with him especially well. When she gets to school, Hana is as surprised as anyone else that she’s won the Good Classmate Award. Her dad is really pleased. But what she really wants is for her parents to get their relationship back on track. To this end, throughout the narrative, she keeps proposing a family trip to the seaside. But her mum is way too busy with her demanding job to spare a weekend any time soon.

One day in the supermarket, Hana observes nine-year-old Yoo-mi (Kim Shi-a) and her seven-year-old younger sister Yoo-jin (Joo Ye-rim). They seem to be happy as sisters: perhaps their family life is better than hers. A short time after, she runs into Yoo-jin again when the younger girl has lost her sister. Hana takes the girl in hand and searches with her until they find her older sister. The three become friends. 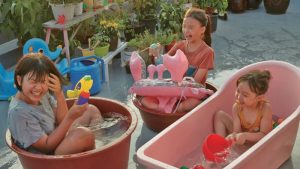 Later at home, when her dad’s phone rings, Hana discovers he has a girlfriend and reacts by hiding his phone in a shoebox, which she later takes to the other two girls home to give them things to play with. The phone gets forgotten. The three later prank phone “devil Joo” from a payphone and call her a tramp.

Meanwhile, the two girls’ mum’s landlady, who can never find their absent mum to speak to her, is trying to put the flat back on the market which would mean the girls having to move out. Hana and the two girls play up when she brings prospective tenants to see the flat, making up stories about how terrible the flat is to live in because of all its problems (which they’ve invented). 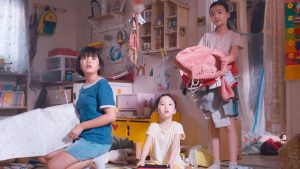 Having helped them build a model of their ideal house out of household odds and ends, Hana organises herself and the two girls a trip to Bora beach to find the their mother, but the three get a bus which doesn’t go where they expect and eventually end up at the wrong beach, taking up in the abandoned tent of a family from which the man has just rushed his pregnant wife to hospital. Both families, that of Hana and that of the two sisters, clearly have a lot of issues to work though.

With compelling performances by its three young leads, this South Korean movie completely takes you into the mindset of an eleven year old girl as she grapples with complex, adult issues – the breakdown of personal relationships, landlord and tenant problems. It holds the attention for an adult audience and is likely to do the same for children of eleven or above (or at least for girls of that age). Not so much a children’s movie as a movie about children, it has plenty of rough edges for the parts of childhood where things aren’t as rosy as they might be. All of which makes it worth seeing.

The House Of Us plays in the BFI London Film Festival and the London East Asia Film Festival (LEAFF). Watch the film trailer below:

A teenage girl in Seoul, Korea, 1994, comes to terms with life on a number of levels - personal, family, social, political  – from the BFI London Film Festival and the London East Asia Film Festival (LEAFF) [Read More...]