Aaron Schimberg’s film about a European auteur directing their first English language movie was never going to be an average movie. In this American film, the bucolic blond Mabel (Jess Weixler)is a beguiling beauty who struggles working with a co-star who is anything but the epitome of conventional beauty. Although she plays the blind lead who falls disgracefully in love with a facially disfigured man (Rosenthal, played by British actor Adam Pearson, who has an actual facial disfigurement), her real-life interactions showcase a Draconian demeanour out of character with the charitable character she inhabits onscreen. It’s one of the many canny references swimming in Chained For Life, a work steeped in residual reference.

This distinctive film strives for originality. Schimberg is unashamed at displaying his innate knowledge of cinema, commencing with the silhouetted opening titles. Opening with one of Pauline Kael’s sparkier quotes, the movie is overtly proud of its understanding of the world of cinema, peering behind, before and between the goings on of a film.

Paradoxically, considering the film is concerned with shallowness and superficial, Chained for Life is deliciously beautiful to look at, with a dazzling assemblage of coloured textures. The camera wafts over the set, green tinted in colour, filmed with Gilliam-focused attention. Tellingly, the film’s fictional director, Herr Director (Charlie Kosmo) is a skilled German auteur, and a bohemian with an extraordinary background in circus training. His cast members boast their director’s values for bringing European sensibilities to an American film. The script is killer, parading an emblem of witty remarks. 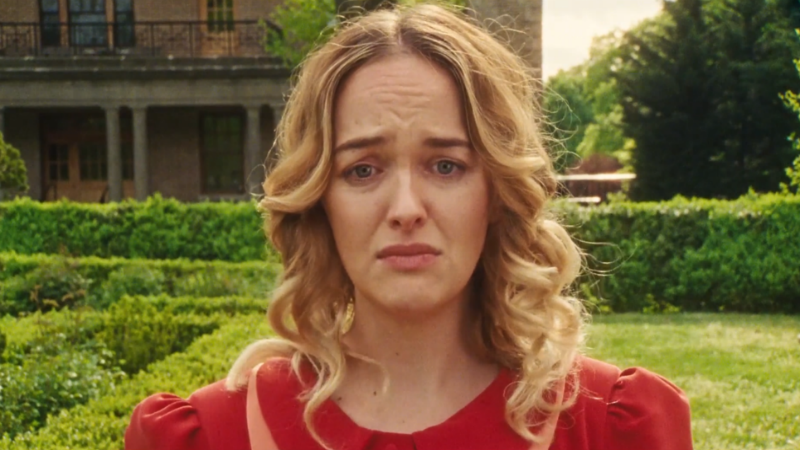 Mabel looks the slinky sensual star while shrouding herself in the most luxuriant of red dresses. Her co-star Rosenthal suffers from neurofibromatosis type 1 (a genetic condition that causes tumours to grow along the nerves). It’s a real life ailment, rarely seen in the parameters of cinema. For those working on the film, he is the film’s real life bête noire, as production assistants throw script re-writes into his hand with neither curtsy nor courtesy. Mabel stares out at her lonely, lofty co-star, pain-stricken at her hypocrisy and the crew’s cruelty. In its glorious way, it’s both a love letter and a middle finger salute to the film industry. There are complexities, contradictions and conflations. The film and the film within the film shift from shot to shot in metacontextual frisson.

At one point, Rosenthal is bombarded by a fan for a photograph. Unsure of the disciple’s intention, he protests he doesn’t know the person. With focus on the pair of them, the enthusiast declares “I am who I am, I can’t change that” staring directly at the camera. The direction is obvious; the film’s aiming that comment at us, the audience. And why not? As purveyors of visual entertainment, we are as culpably superficial as the creatures we condone on the screen! Brilliant movie.

Chained for Life premiered at the Cambridge Film Festival. It’s out in cinemas on Friday, October 25th. On VoD on Monday, February 17th.