Discover Iceland in all its glory!

We sat down with Icelandic auteur Rúnar Rúnarsson to discuss Echo, covering everything from working with amateurs to the country's outstanding beauty!

The Icelandic movie Echo (Bergmál), which premiered in competition at the 72nd Locarno Film Festival, is a major step up in form and content for Icelandic director Rúnar Rúnarsson. Set over the Christmas period, its a wide-spanning portrayal of the nation that’s equal parts profound, funny, and banal. Its standout quality is the way it marries formalist rigour — each scene focusing on a new character and shot with a single static camera — with emotion, humour and philosophical enquiry. We sat down with the director to discuss his unique approach to hybrid forms, Icelandic society, and working with real people.

Redmond Bacon – Echo is very different from single character portraits Volcano (2011) and Sparrows (2015). Why the massive change in tone?

Rúnar Rúnarsson – I wouldn’t say that its a massive change in tone. People say to me: “you made some radical changes in your life making this film”. The fundamental difference is that we are portraying society instead of one person, but I think the fingertips of the creative team and I are quite similar.

RB – Echo takes such a panoramic view of Iceland. Do you think it will strike a chord across Icelandic society?

RR – Festival-wise my films have always done well, but I’ve never sold tickets anywhere, not even at home. I’ve been privileged in my life to do the things that I wanted. But you can’t have it all. You can’t have sold out theatres night after night. My main aim has always been to follow my vision. I have no expectations towards ticket sales, in Iceland or elsewhere. To be completely honest, I don’t think in this way. I have a big misconception of my films though. I think they are really audience friendly but I’m still regarded as an “artist director”!

RR – There was a really detailed manuscript. I think there were maybe nine or ten scenes that didn’t end up in the film. The rules we had were made for effect. I think we achieved a sense of authenticity. We decided not to say what is real and what is in full control. Anyway, even when you look at a fly-on-the-wall documentary, there are decisions such as when you come in and out of a shot and how its put together. There is always a sense of the author.

RR – All my fictional films are about things I’ve gone through in my life or people close to me. My goal is to be honest and capture a sense of reality and a sense of my emotions; to put it out for whoever would be interested. Most scenes in this film are in a greyscale. All people in front of the camera are under their own identity; sometimes you hear their names. And it is their real names. Often they are in their native surroundings. 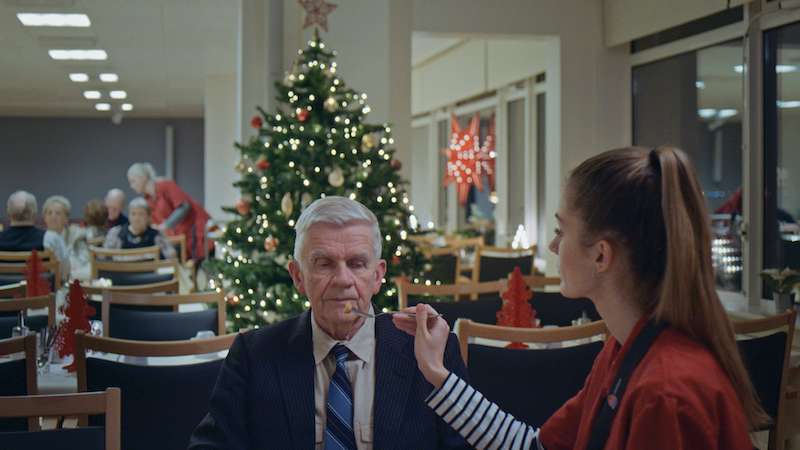 RB – These are native actors playing versions of themselves?

RR – Sometimes being themselves, sometimes following a script. There are some with acting backgrounds, then they went into farming and play a farmer in the film.

RB – There’s so many different perspectives in the film…

RB – So there isn’t a massive divide between rich in poor in terms of being aware of each other?

RR – No. It’s so small. But the gap is getting bigger. There is private education and healthcare, which didn’t exist when I was growing up. Society is changing, but it still has this Scandinavian Social Democratic foundation.

RB – You tackle the Panama Papers scandal when former Prime Minister Sigmundur Davíð Gunnlaugsson had to resign. Was it important to have these contemporaneous elements too?

RR – We shot during Christmas 2018. There were things debated at the time that ended up in the film. But it’s not about the truth of the period; it’s an echo, hence the title, portraying fragments of life from Iceland during that time.

RB – I want to talk about another Scandinavian director. Roy Andersson. Echo has a similar mise en scène to The Living Trilogy (2000-14)? Was this an inspiration?

RR – A friend of mine didn’t understand the project I was working on. I was about to go to the financing place and gave him the script. He went through it and said: “It’s going to be really simple for you to present this film. Just tell people to imagine if Vittorio Di Sica would make a Roy Andersson film.”

RB – In terms of narration it reminded me of the British movie Love Actually (Richard Curtis, 2003), in that there’s a lot of stories set around Christmas and the season itself becomes the narrator. Was this an inspiration at all?

RR – No. But when I was developing the movie it was at first about these fragments of life. First I thought about doing it over the period of a year. But I wouldn’t ever be able to afford it, and the more I developed it, the more I wanted to have more control. I felt like Christmas was the right framework because it’s hard to sympathise with people you don’t know. In normal films you have the time to build up a character and for the audience to care about them. Here you meet people and then they’re gone and never reappear…

RB – But Christmas gives it this sentimental overlay?

RR – Yes. It’s an amplifier of our emotions. It helps the audience to be put in the place of these people. Many of them have been in these situations. It’s a time of year where people are more observant. They try to be better people; more generous and open-minded. At the same time, for many people, it’s the worst time of the year. It was a good guide to constructing a narrative.

RB – Was it all shot within this two week period?

RR – There was one scene we just had to do earlier. The burning house scene is from another time of the year.

RB – That’s a very evocative scene. It reminded me of The Sacrifice (Andrei Tarkovsky, 1986).

RR – He had to burn that house two times. 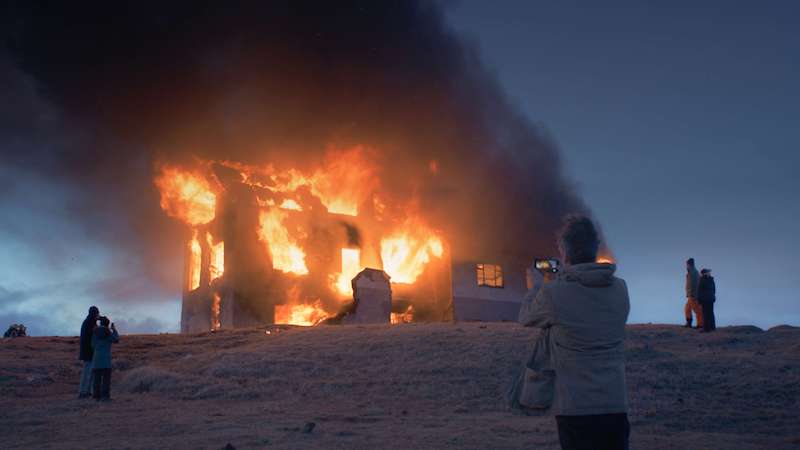 RB – Films are always set against nature, a natural byproduct, I guess, of shooting in Iceland. But this film seems mostly focused on the people itself, which goes against a conventional approach to depicting the country. Was this intentional?

RR – It was never my intention of decorating something in nature. Nature is a part of living in Iceland. Look out the window and there are mountains! Nature is beautiful. But it shouldn’t only be used for decoration or production value. You should use it as a narrative tool. In a perfect film, everything that you see or hear should have a function. For example, the final shot of the film is there not only because its beautiful. It’s a metaphor of life continuing. Water is a transition, a vessel in the water, going through the tides and waves. It’s the year ahead.

RB – There are some great transitions, such as between a Children’s Christmas Pageant and a Bikini Body Building Contest. How long did it take to think “OK, this will go here and this will go there” before putting these scenes together to develop the film’s rhythm?

RR – We slowly put the film together while we were shooting. Working with these tableaus. Whether you go 10 seconds earlier in or out of a scene can have such an impact on the rhythm. So we try to take enlightened decisions. But you shouldn’t be too clever. You have to follow your instincts.

RB – The film has a strong cycle of life theme, best expressed when it contrasts New Years Eve celebrations with a baby being born. How did you gain the trust of the couple to film a live birth?

RR – Like with many other people in the film, it was a search for the right people who were generous enough to share their lives. There were many other people who showed interest then backed out. We have no control over a birth. We are not cutting either. We thought we would have to shoot many different births to have something to choose between. But we were just extremely lucky and only shot one birth.

To get people to participate in this kind of thing is about being honest with what we want to achieve. I don’t want to to manipulate anybody; whether its real people or my fictional characters. They represent something in me and I want to respect myself. Sometimes I’ve been to film school conducting lectures. At the end the moderators ask: “Do you have a message to the students? What should they do?”

This surprisingly sentimental entry from Rúnar Rúnnarsson is an epic ode to his Icelandic homeland in equal parts funny and sad - now on Mubi [Read More...]

We sat down with the directing duo behind Space Dogs, an experimental and deeply disturbing doc depicting canine life in a never-seen-before way - live from Locarno [Read More...]