"Dirty gem"
A drive to the airport turns hairy in awkward German black comedy A Voluntary Year, a brilliant tale of adolescent indecision and fatherly overbearance - live from Locarno

A tale of adolescent indecisiveness, fatherly overbearance and the inability to communicate, A Voluntary Year is a painful, funny and slyly profound work. Spinning gold from the most basic of premises, it is also another fine addition to the “German awkwardness canon” (a phrase I coined myself).

In recent years, ranging from Maren Ade films such as Everyone Else (2009) and Toni Erdmann (2016), running through to elements of I Was At Home, But (Angela Schanelec, 2019) and The Ground Beneath My Feet (Marie Kreutzer, 2019), German-Language directors have been particularly adroit at mining social awkwardness and communicational failures for bitterly dark comic effect. A Voluntary Year follows in this recent, rich vein, creating moments of genuine comedy from relatable, personal failures. They work because no one acts like they are in a comedy. By treating everyone’s issues very seriously, the comic beats land harder, making you laugh while you cringe.

It starts on the way to the airport. Urs (Sebastian Rudolph) is driving his daughter Jette (Maj-Britt Klenke) there so she can take a flight to Costa Rica, where she will spend a gap year in a hospital. She looks less than pleased, still roiling from the breakup with her boyfriend Mario (Thomas Schubert) and nervous about what this future halfway across the world will bring. Not that her father notices. He thinks she’ll have a wonderful time. 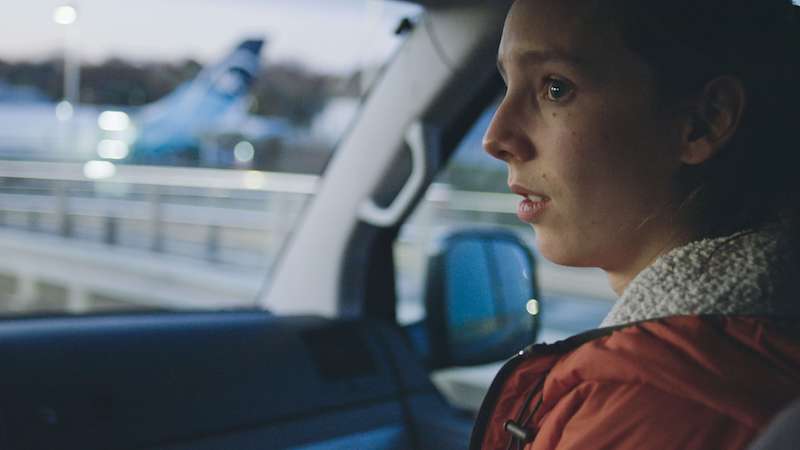 “You can’t please everyone all the time,” Urs lectures his unsure daughter, all the while showing how disastrous it is trying to be an expert on everything. An early scene involving a changed lock quickly establishes Urs as an unreliable father; panicking over nothing instead of taking the time to think rationally. Meanwhile Mario turns up to say goodbye, throwing her central conflict into sharp relief. Perhaps she won’t catch that flight after all?

In the hands of a less confident director, these personal issues would’ve been more obviously telegraphed through endless backstories. This limited viewpoint works wonders for the film, which is all about how the desires we project onto others affects our own lives. The flight to Costa Rica is the central metaphor here, seen by Urs as an escape from small town life and by Jette as a great plunge into the unknown away from Mario. The conventional script of teenage escape versus parental provincialism is flipped, the film expertly blurring the lines between the generations.

Sebastian Rudolph does fine work as the hubris-laden father, fully chewing into a screenplay that allows him to be arrogant, stupid, naive and caring all at the same time. Whether it’s his strained relationship with his brother, his joyless affair with his married secretary, or his negative attitude towards his own patients at the clinic, he cannot seem to maintain a truly wholesome relationship with anyone. He’s not a stereotypically bad person, yet his myopic viewpoint — stressed by the film’s use of limited perspective — blinds him to the real issues at hand. Klenke is equally game, flitting endlessly between rash decision-making and indecisiveness, sometimes in the same scene, showing that even if father and daughter have different viewpoints in life, they deal with their issues in often the same way.

Ulrich Köhler keeps the viewpoints close, never cross-cutting, only following characters from one point to another if they have met in the same space. This is a particular effective technique as it truly lays bare how easily miscommunication can happen. Taking place over only a couple of days, A Voluntary Year provides a convincing snapshot of German provincialism. Complemented by overcast skies, sodden fields and barren woods, A Voluntary Year makes a good case for escaping the complications of small town living, but only if you can escape yourself first.

No release date has been set yet for A Voluntary Year, which debuted in the Concorso internazionale at Locarno, but expect a warm release in Köhler’s native Germany.

Would you like to see my inner beauty? This German comedy about father and daughter with conflicting personalities and lifestyles is a heartwarming and pleasant surprise from a country not often associated with humour - on Mubi on Sunday, June 28th; also available on other VoD platforms [Read More...]

In The Fade (Aus dem Nichts)