The year is 1996. The news media are championing South Korea’s economy as it seemingly goes from strength to strength, never questioning whether financial institutions might in fact be pursuing practices which are sooner or later going to have disastrous economic results. Ms. Han Si-hyun (Kim Hye-su) who runs a fiscal policy unit at the Bank of Korea submits a devastating report to the Bank’s governor, explaining that she and her small department have procedures set in place to save the economy and protect ordinary Koreans from disaster.

The politicians have a very different agenda, however, specifically the smarmy Vice-Minister of Finance (Jo Woo-jin) who views financial collapse as a way to weaken the rights of the working class and restructure the economy in favour of large business interests. Although it’s not name checked, there are echoes here of Naomi Klein’s book The Shock Doctrine and the film based upon it. Against Han’s advice, the government secretly holds talks with the IMF in the form of Michel Camdessus (a suitably creepy Vincent Cassel). 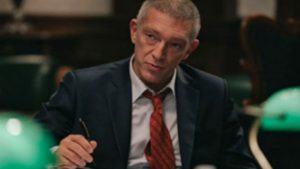 While most of the government officials and the bank’s governor are male, Ms.Han’s small team comprises both genders in equal measure. At one point, she’s subjected to verbal abuse as to how women are emotional and shouldn’t be allowed to work in banks. At another, she bravely holds an unauthorised press conference to reveal to the press what’s going on, only for none of the papers to cover the story.

In a second plot strand, young, smart and hungry stockbroker Yoon Jung-hak (Yoo Ah-in) quits his established financial firm who are convinced the country is on a sure financial footing because, like Han, he can see the impending crash ahead. Unlike Han, however, he wants to play the market and help investors profit from it. The film doesn’t quite know how to handle Yoon. He’s shown as both the visionary who accurately predicts what’s coming and the ruthless predator who helps his clients profit from it – yet on one occasion he rails against his investor clients, suggesting that making money isn’t everything. 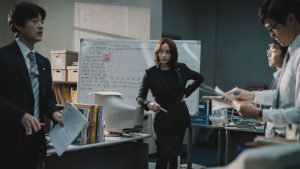 A third plot strand takes the proceedings closer to ordinary people as small business owner Gap-su (Heo Jun-ho) is paid for a lucrative deal with a promissory note rather than cash which later turns into a worthless piece of paper when he has creditors to pay. He reassures his workers that they will get the wages they were due two days ago while his wife who works elsewhere loses her job. He contemplates jumping off the balcony of the high rise apartment in which his family live as his two children sleep soundly in their room.

The relentless pace never allows itself to get bogged down in the radical ideas at the film’s heart, preferring instead to keep things moving. An audience-pleasing melodrama as exciting as any Western blockbuster, it successfully conveys a pivotal moment in recent Asian economic history.

Default played as a teaser for LKFF, The London Korean Film Festival. Watch the film trailer below:

Would you go all the way (for the USA)? A US Secretary Of State hires a nerdy speechwriter to help her win the Presidential election in this romantic comedy - in cinemas from Friday, May 3rd [Read More...]