"Greasy movie"
Fugitive thriller set in a gloomy and despondent China excels in visual excellence and technical wizardry, yet its plot is tedious and banal - now available on Mubi

Zhou Zenong (Hu Ge) is a quiet and introspective gangster who has just been released from jail. He soon lands in hot water, after a meeting with other criminals does terribly wrong. What was intended to be a motorbike theft workshop suddenly goes violent, with a man being shot on the leg and a policeman being killed. Zenong fends for himself by using a bike lock as some sort of nunchaku. As a result, he’s once again wanted by the police. Tens of undercover cops are sent on a mission to find the elusive bandit. They go on a wild goose chase (I doubt, however, that such phrase exists in Chinese; the titular wild goose is probably coincidental).

Most of the story revolves around Zenong and the “lake beauty” Liu Aiai (Gwei Lun Mei). Her accolade is a reference to the Wild Goose Lake, where where she works as a prostitute. It’s unclear whether Liu is loyal and perhaps even infatuated with Zenong, or whether she’s some sort of femme fatale about to turn him and receive the 300,000 yuan ransom offered by the authorities. Zenong’s motives too are ambiguous. At times he seems keen to turn himself in, as long as him wife receives the large money sum. 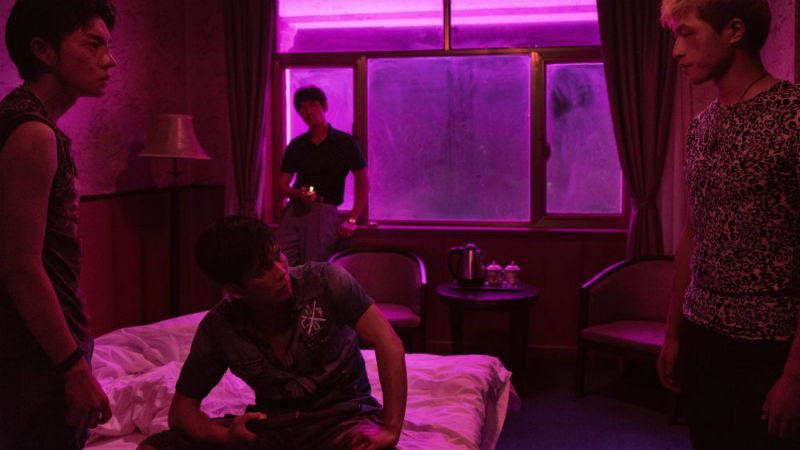 The cinematography of The Wild Goose Lake is nothing short of spectacular. The Chinese director and his loyal cinematographer Jonsong Dong – who won the Golden Bear five years ago for Black Coal, Thin Ice – know what they are doing. Almost all action takes place at night. The crammed buildings and dirty and narrow alleyways of greater Wuhan (in Central China) look like a labyrinth. There are very few windows. Artificial yellow and violet lights give the film an ethereal feel. You will feel giddy, like you have been transported onto a different planet. It reminded me a lot of Bi Gan’s Long Day’s Journey Into Night (2018). Minus the 3D. Plus some blood.

The director, however, does not overplay the violence. The gruesome sequences are sparse, the most peculiar one being an umbrella killing. Instead the director focuses on the ambiguous relationship between Zenong, Liu and their associates (some of which meet a horrible death). The problem is that the plot gets a little banal and trite. And some nuts and bolts just don’t fit together. At times, I couldn’t work out who was who, and the purpose of each character. Perhaps the director intended to comment on China’s descent into criminality and despair. To be honest, I’m not entirely sure. While hypnotised by the visuals, I also lost interest in the film narrative and any underlying connotations it may have.

The Wild Goose Lake premiered in competition at the 72nd Cannes International Film Festival, when this piece was originally written. Available on Mubi from February 28th for a month only.

Take a 3D journey into the nostalgic memories of a lonely Chinese man, in a film that excels in technical wizardly and has flavours of Tarkosvky - now availabel on VoD! [Read More...]