"Filthy genius movie"
"The weaker sex"? More like "the resilient sex"! Chinese film is a tribute to female strength in a country where being a woman means being at serious disadvantage - from the BFI London Film Festival

This modern-day Chinese parable offers a detailed portrait of the gender gap in the most populous country in the world. This is a major accomplishment for director Vivian Qu, who also wrote the rich and profound script about two female teenagers dealing with very different issues. Their problems are somehow intertwined, and they fluctuate between the roles of oppressor and oppressed, always carrying the burden of being a woman.

In the opening of the movie, Mia (Wen Qi), a young cleaner in a seaside Hotel admires a gigantic resin statue of Marilyn Monroe recently erected on the beach promenade. She’s donning the emblematic white dress fanned from below, from The Seven Year Itch (Billy Wilder, 1955). She’s a symbol of female emancipation in the West. Mia dreams of becoming a receptionist. Then one night she witnesses a middle-aged man assault two young girls. The problem is that Mia is an illegal worker, and she does not report the event because she fears being punished for her status. Wen (Zhou Meijun), one of the victims, sees her life collapse after the incident, being subjected to a shabby and biased investigation combined with a family breakdown. 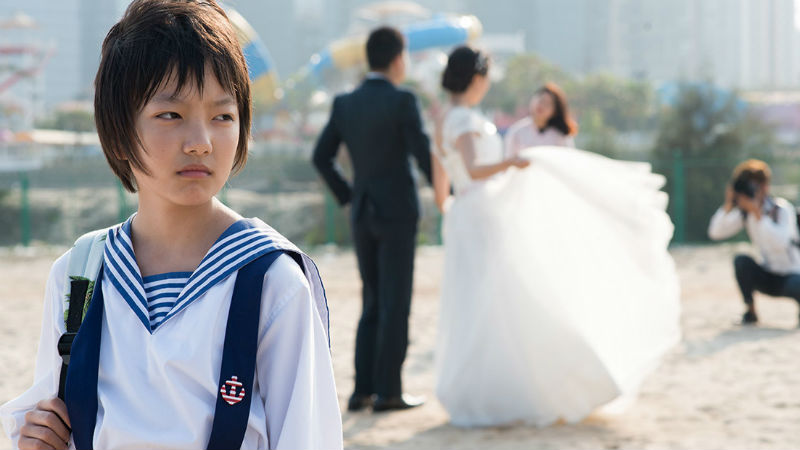 Mia and Wen lead very different lives, but they have in common the fact that being a woman puts them at disadvantage. “I don’t want to be reborn a woman. Not ever again”, says the receptionist to Mia after being dumped by her boyfriend. All the male characters in the film are very intimidating. The girls are not weak losers, instead they are anti-heroines facing an uphill struggle; they are willing to take responsibility for their actions, however dear the price may be. The two leads deliver very confident performances of complex characters, and every single actor has a part instrumental to the functioning of the narrative.

Vivian is a feminist filmmaker stirring a very urgent debate about women’s rights in China. And this is the only film in the Competition in which female issues are the centrepiece, as is Vivian the only woman director. Coincidentally or not, the President of the Jury Annette Bening has spoken out about the topic of female representation in film: “There is a lot of sexism, of course that exists. There’s no question. But I think things are changing. We have a long way to go, in terms of parity – production, directors, writers, actresses, appearing in festivals and all of that.” She added, “I think the direction we’re going is positive.” These factors and the grandiosity of Angels Wear White might make it the Festival’s big winner.

What’s in the Darkness

Inside the Chinese Closet

How many gays and lesbians can you fit in the Chinese closet? New documentary examines the alternatives to coming out in the largest country in the world [Read More...]