Hannah (Charlotte Rampling) lives in a suburban town somewhere in French-speaking Belgium. Despite her many years (the character is presumably in her 60s or 70s), she still has to work as a cleaner and housekeeper for a bourgeoisie family with a disabled child. She is married, but the relationship is mostly uneventful. She has a dog, her biggest companion. She takes theatre lessons, which seem to offer some sort of therapy and venting outlet for an otherwise tedious existence.

Then her husband gets imprisoned. Apparently she committed a crime towards a child, and her spouse took the blame for her. Just maybe. It’s never entirely clear what really happened. She also has a estranged son. He refuses to see his own mother and even prevents her from seeing her own grandchildren. He’s very upset, presumably at the crime that she committed. Her imprisoned husband is upset at his own son, and not at his wife Hannah. Presumably because of his refusal to see his mother. I have intentionally used the word “presumably” several times in this review. This is a film that only provides viewers with fragments of reality, allowing us to pierce the pieces together in an entirely different way. Another film critic I spoke to created an entirely different version of events. 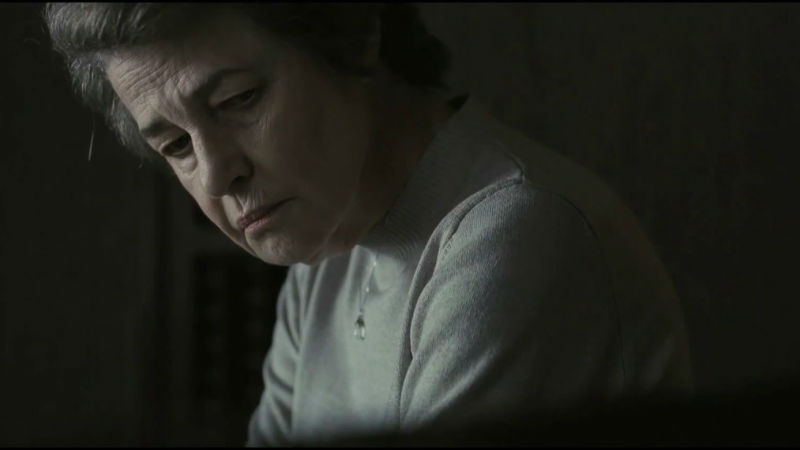 Yet, this is not a detective movie. The Italian Andrea Pallaoro is not too concerned about the nature of the mysterious crime. Instead, he investigates Hannah’s personal relationships, routine, fears and ambitions. You will be asking yourself whether the plot will come full circle at the end of the movie, whether the relative equilibrium in Hannah’s life will be restored, whether the crime will be revealed or not. The intentionally monotonous and languid pace of the film suggest an all-too-European open ending. Will Pallaoro surprise us with a shock revelation, or will the questions be left unanswered? Of course I won spoil the ending for you. The last sequence of the film (and I was informed that two endings were initially made) takes place in the metro, and it’s very powerful exactly as it is.

In a way, Hannah is a neighbour that we all have. Or someone you see on the metro/Tube. We dislike and pity her in equal measures, while only knowing fragments of her life. Pallaoro emphasises our alienation with the constant use of slanted angles, mirrors and blurred surfaces (such as a steamed glass inside the slower). It’s as if she was saying to viewers: “you are taking very partial, subjective look into a stranger’s life. She’s fallible and she deserves our compassion, just like any human being on Earth”. 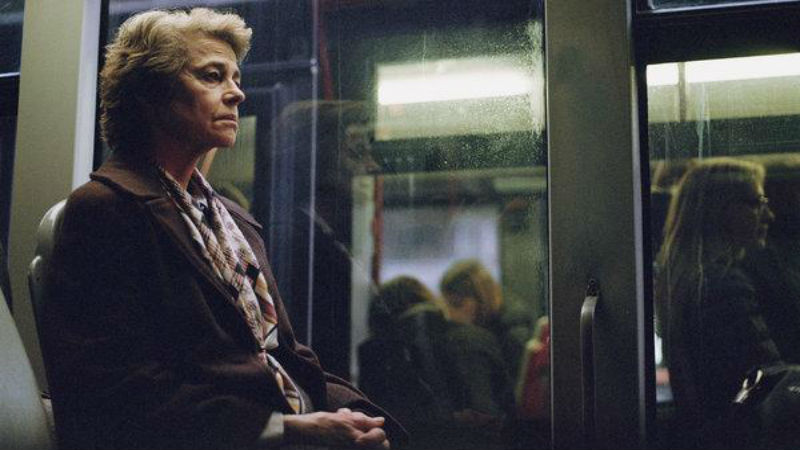 The camera is almost entirely static, except for a sequence in the public swimming pool and the final one in the metro. It reminded me a lot of Ulrich Seidl. The gaze remains motionless and firm, the action is subtle, yet the sentiments are rampant. Subtlety and simplicity speak louder than technical wizardry and myriads of twists.

The 70-year-old British actress is magnificent. She hollers and moans in her theatre class, in the very first sequence of the film. She does it again later in the second half of the movie as she breaks down in a public toilet cubicle (this time she isn’t acting, she’s having a real meltdown). She longs for her husband’s body in bed (this will ring a bell with those who watched Rampling’s character erotically fantasising about her missing husband in Francois Ozon’s Under The Sand, 2000). All extremely convincing and moving.

Hannah screened in the main competition section of the 74th Venice International Film Festival, where Charlotte Rampling won the Volpi Cup for Best Actress in 2017. It is out in cinemas across the UK on Friday, March 1st.

A Place to Live

The topics of grief, mourning and reconnecting with the past are the central pillar of this Canadian drama, set in the wintry countryside of Quebec - from the Tallinn Black Nights Film Festival [Read More...]

What happens when a headstrong and tenacious doctor constantly dealing with dying patients becomes ill with an incurable disease? Can he step out of the caretaker's shoes into the receiving end? [Read More...]