"Mostly clean movie"
Child Services are unable to cope with extremely dysfunctional 9-year-old Benni, who refuses to play by the rules - on VoD Friday, March 27th

It’s never entirely clear why little Benni (Helena Zengel) is prone to violent outbursts. They are not seizures. Perhaps she suffers from a toxic combination of ADHD and anger disorder. The precise diagnosis is never revealed. She’s simply described as a “system crasher”, a German expression for children and “juvenile delinquents” that neither families nor government organisations are able to control.

Benni’s mother (Lisa Hagmesiter) has given up her eldest child because she fears that her two younger children could suffer and become “just like Benni”. Plus, Benni hates her mum’s boyfriend. Benni has been placed under the care of 25 families. She is in a juvenile institution under the purview of the avuncular and doting Frau Bafané (Gabriela Maria Schmeide). Anti-violence educator Micha (Albrecht Schuch) is brought in in a desperate attempt to bring Benni into peaceful and convivial existence with the other children. He decides to spend two weeks in the woods with the little girl, but the well-meaning gesture turns out to be a ride from hell.

The anger outbursts are as furious and violent as you can imagine. The young Zengel is very convincing, and this must have been a particularly tough role for such a young actress. She screams and wails, erratically jumps and kicks, throw around objects of all sizes and viciously attacks people (children and adults alike) if she feels vaguely spited or threatened. At one point, she nearly kills her foster brother. She repeatedly shouts out the most obscene profanities, which is quite remarkable in a culture where most people tend to avoid vulgar language. I heard more “fick dichs” (“fuck yous”) than in my entire life multiplied by 50 (and I used to live in Germany). She calls just about everyone an “Arschloch” (“arsehole”), “Fotze” (“Cunt”) and the almost unheard of “Muschi-Loch” (“pussy hole”). A masterclass of dirty and vulgar German. 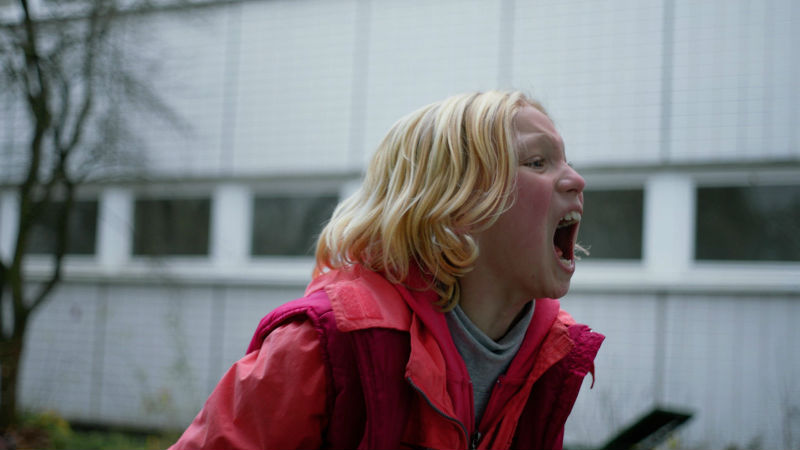 This isn’t a particularly pleasant film to watch, unless you are keen to listen to a child screaming in your ear virtually non-stop for nearly two hours. This jarring quality is not an issue per se for us. At DMovies, we like disturbing and challenging films. The problem with System Crasher is that it’s too manneristic. The story relies almost entirely on the horrific fits. The narrative arc is rather flat, with a climax every two minutes and very little respite. Plus the film montage and music score are quite poor, with heavy guitar strings combined with clumsily chopped images intended in order to represent Benni’s malfunctioning state-of-mind. A little bit like a shoddy rock’n rock music video.

There is little examination as to what drove Benni to such dysfunctional state. Is this behaviour innate, or is it a consequence of her mother’s actions? The film is not too concerned in either raising or answering these questions. System Crasher is not an indictment on German Child Services either. Frau Bafané, Micha are genuinely hard-working and caring, and they seem to have a number of tools are their disposal. So what is System Crasher? I think this film is intended to be a humanistic portrayal of a broken human being and those desperately trying to help her. Sadly, the outcome is as broken as the little Benni. And the ending is rather wacky.

System Crasher showed in Competition at the 69th Berlin International Film Festival, when this piece was originally written. It premieres in the UK in October as part of the BFI London Film Festival. On VoD Friday, March 27th.