As the 22nd Tallinn Black Nights Film Festival draws to a close, we talk to the Festival Director Tiina Lokk and find out the dirty secrets of an event that showcased nearly 260 feature films, seeing more than 80,000 admissions!

The latest edition of the 22nd Tallinn Black Nights Film Festival drew to a close this weekend, after two weeks of a very intense programme showcasing films from literally every corner of the planet. DMovies followed the action live. Our editor Victor Fraga attended the event and wrote 20 dirty reviews exclusively for you. You can check out the full list on our review archive right here.

Victor’s two favourite gems (to which he gave the maximum score of five splats, a rating reserved exclusively for films described as “filthy genious”) were the Hungarian very personal and lyrical Bad Poems (by Gabor Reisz) incendiary anti-racist Australian film Slam (Partho Sen-Gupta, pictured below). The describes the latter as “film of the year”. 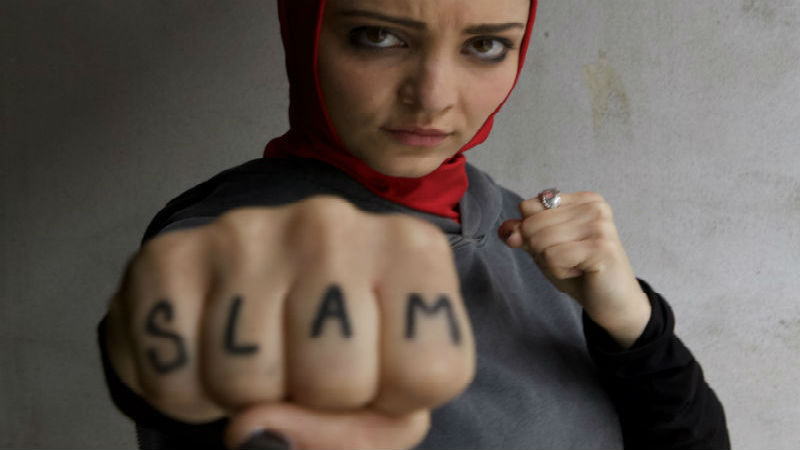 The big winners of the event were the tender and feminine Colombian coming-of-age drama Wandering Girl (by Ruben Mendoza; it snatched the Festival’s Grand Prix), the superb Korean drama about a couple’s realisation that the spark in their relationship has died Winter’s Night (Jang Woo-jing; it won both the Best Director and the Best Actress prizes), the Canadian grief story A Place to Live (Bernard Emond; for Best Cinematography) and the Indian caper/black comedy Kadakh (Rajat Kapoor; for best script). All prizes were very well deserved, even if Victor’s favourite films left empty-handed.

Our editor also took the opportunity to chat to the Festival director Tiina Lokk (both are pictured together on the “black carpet) and find out the dirty secrets of an incredibly well-organised, diverse and large event. She explained how it all began in the 1990s after the demise of the Soviet Union nearly killed all cinemas in the country. She also talked about the symbolism of the black nights (there was no shortage films dealing with cold weather, including A Place to Live, Winter’s Night and Angelos Frantzis’s Still River), of the (in)famous “black carpet” (instead of red), how the wolf became both the Festival’s and the country’s mascot, and also why is it that Brits and other Europeans should visit Estonia! 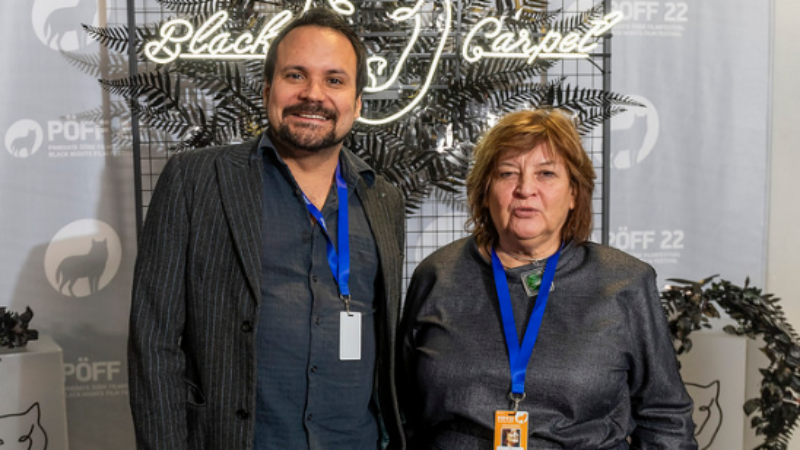 Victor Fraga – You started the Festival 22 years ago, in the 1990s. Was it the demise of the Soviet Union that enabled the event?

Tiina Lokk – Under the Soviet Union, there was only one international film festival, which was located in Moscow. The other festivals, genre-specific or documentary, were exclusively for films made in the Soviet Union, plus they were always held in different cities. Estonia did not have a festival culture then. The first film festival in the Baltics was in Riga (Latvia), in the late 1980s, very close to the reforms [the transition to capitalism]. It was a revolutionary, very broad and interesting festival, but sadly it no longer exists.

When we started, our Festival was a protest act. Because the situation was very tough. At Soviet times, we had 600 cinema screens in Estonia. The Soviet regime encouraged our culture. These cinemas were open 7 ways a week and located in every city of the country, and even in the countryside. The film industry altogether had been financed directly by Moscow. When the reforms started in the early 1990s, the cinemas began to become privatised and to collapse. They became lucrative property business.

VF – How many cinemas were left?

TL – Only a few. In the late 1990s, there were only two cinemas in Tallin, one in Narva and one in Tartu. That was the time when we only had Hollywood films, plus Chinese b-movies about Kung-Fu. And nothing else. I was a film critic and a script doctor. I had many proposals to work as a journalist. But I decided to create the Tallinn Black Nights Film Festival instead. That was 1997.

At first, we didn’t believe that the Festival would survive. The atmosphere was hostile, the government didn’t want to give us money. We no longer had cinemas across the country, and so we had to build temporary cinemas in our first 15 editions. We wanted to raise three questions: “Why do we no longer have cinemas?”; “Why do we only get American movies?”; and “Why is Estonian cinema doing so bad, its very existence being threatened?”.

The first Festival was very successful, with a very positive response from the audience. Then we developed so quickly, it was incredible. There was a huge hunger from both the industry and audiences. In the first seven years it was very difficult to keep the horse running. I felt like a cowboy. Or like a teenager growing so fast that their clothes no longer fit them.

VF – Where do the “Black Nights” on the Festival name come from?

TL – We began to create a brand immediately. Back then, nobody knew where Estonia was. We decided to hold the Festival at the most disgusting time of the year, the dark nights, when there are only two things to do: to make children and to watch movies.

So we turned things around, and said: “let’s celebrate the black nights”. “Black nights” sounds much better than “dark nights”. November in Estonia is the month of the lonely souls. The souls come back to Earth and visit their relatives.

VF – Is this a pagan belief?

TL – I think so. I don’t know the exact origin, but that’s the same in all Nordic countries. All of November. We think that film auteurs are also lonely souls wandering around.

VF – What about your mascot, the wolf?

TL – Because wolves are lonely creatures, lone hunters. There’s nothing more lonely than a wold howling at the moon. At the same time, in all of our fairy tales the wolf is a very clever animal, a good team member and leader. They know how to survive, and so on. Plus, the wolf is a symbol of green nature, and we are the people of the nature. The atmosphere of the Festival must be honest and clean, just like nature.

Last year, Estonians voted the wolf as the national animal. So now our mascot is also the national animal. We have two large sculptures of the wolf, one is standing in front of the Cinema Artis, and the second one is standing in front of the hotel [Tiina, who is also pictured below, points to the large metal sculpture which is visible from the hotel lounge]. 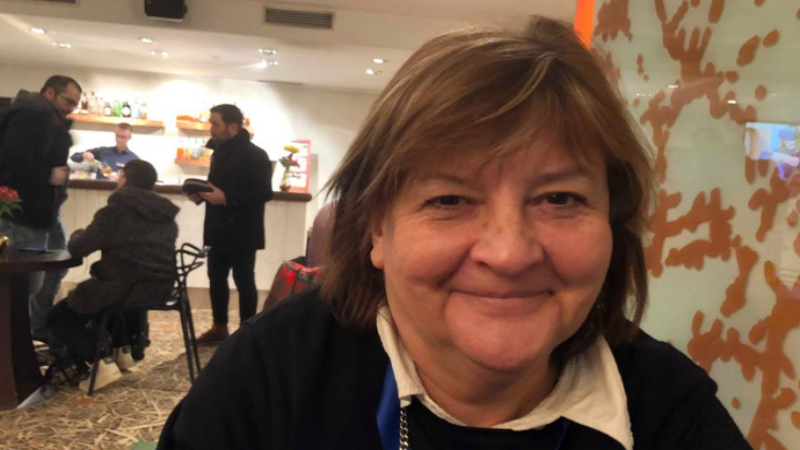 VF – Tell us some anecdotes about your black carpet!

TL – The anecdote is the black carpet itself! We didn’t have a red carpet because red is connected to glamour. There’s a touch of self-irony. The black carpet is made to honour the filmmakers who are coming here for international premieres. We are trying our best to treat them kind!

VF – There may be no glamour. But you certainly are a big Festival. Your catalogue has more than 230 pages. Please share some key figures with us.

TL – There are two competitions, plus many side programmes. We are showing around 200 movies. There’s also the children and youth festival, with another 60 movies. So we are showing about 260 feature movies. Plus there are nearly 300 animation and short films. And we now have an industry section. We are a meeting point for both the Estonian and the international film industry. Last year we had 1,200 international guests from a total of 80 countries. We are covered in 70 countries and in 40 languages. There are 850 screenings and 80,000 admissions.

VF – Why should British people come to Tallinn?

TL – We have a very beautiful old town and excellent food. You can catch films before they are out in Britain, including many world premieres. And industry people will meet professionals from all over the world!!!

Australian film directed by Indian filmmaker will hit you like a punch in the face; our editor describes it as "film of the year" - from Sydney Film Festival [Read More...]