"Greasy movie"
The titillating world of an unlikely Hollywood diva! Tribute to the tragic and trashy diva Jayne Mansfield is a collage of apocryphal anecdotes, rumours and souvenirs - now on VoD

The life and death of movie star Jayne Mansfield really does have something for everyone: sex, drugs, satanism – just take your pick! An actress who got her start as a rip-off Marilyn Monroe, tabloid worthy tales seemed to follow Mansfield wherever she went. Mansfield 66/67 gleefully dives into the titillating world of the Hollywood legend, even beginning the film with a title card informing viewers that the film is based on rumour and speculation, rather than fact. Although audiences will likely learn a great deal about Mansfield from this film, it is deliberately more of a tonal collage, designed to evoke the kind of playful myth-making that Mansfield enjoyed, rather than an all-encompassing biography. Jayne Mansfield was beheaded and died tragically in a car accident in June 1967. 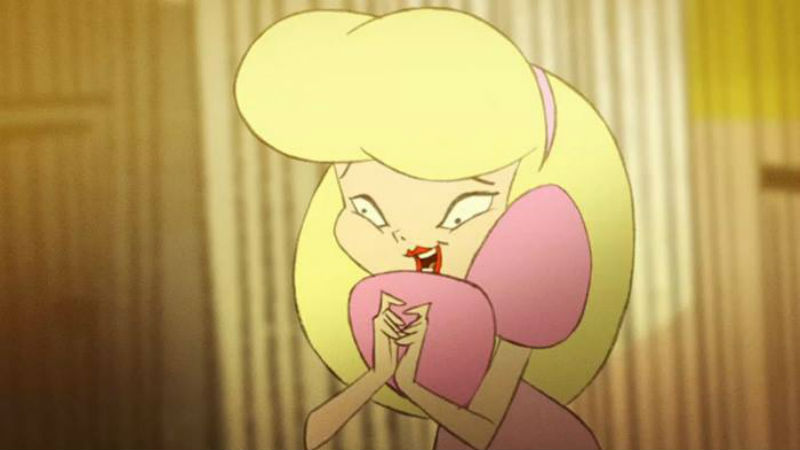 Director P. David Ebersole wisely eschews a birth to death structure in favour of examining Mansfield’s role as an icon within the culture that created and subsequently abandoned her. Her failure to transition from the 1950s era of squealing “dumb blondes” to the more liberated 1960s is one of the more revealing aspects of Mansfield’s life and one which is thoroughly examined. However, her famously disastrous meeting with The Beatles is presented as a personal triumph for Mansfield, rather than a symbol of her dawning irrelevance. Likely this is due to the film’s overall affection for Mansfield, proclaiming her as a charming force of personality and dismissing the notion that she was any kind of tragic figure. Frankly, this is refreshing and the film functions as a fitting tribute for its subject, who by all accounts seemed to relish in her hedonistic persona.

The film has a diverse range of talking heads who provide analysis of Mansfield’s life from all manner of different angles. John Waters is a predictably entertaining feature, his unabashed enthusiasm for all the sordid and sensational details of the Mansfield legend are a consistent highlight. Kenneth Anger is an unsurprising addition, although his contributions lack the kind of gleeful revelry we might expect from the Hollywood Babylon author. Jayne’s contemporaries also enliven proceedings, bringing with them an eagerness to reminisce about their heyday that is underscored with a somewhat melancholic sense of nostalgia. The more academic pundits also seem to enjoy exploring the larger than life elements of Mansfield, comparing her to a mythological figure and sacrificial offering required by a culture based around celebrity worship. 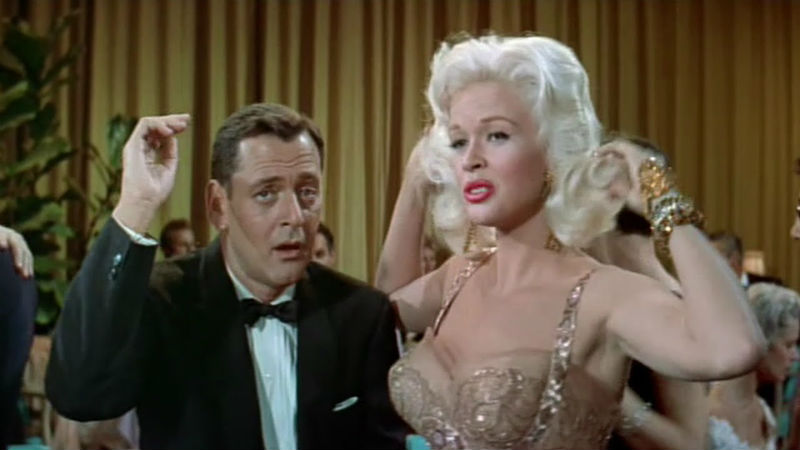 A large portion of the documentary revolves around Anton Lavey, the late leader of The Church of Satan. A hilariously pompous figure, plainly non-terrifying in his Halloween devil costume, his relationship with Mansfield is nevertheless the kind of stranger than fiction celebrity scandal the public demands. Ebersole clearly relishes the total absurdity of the whole ordeal, which comes to encompass curses, pet lions and even a resurrection of sorts. Although it initially seems that the director has been side-tracked by this supporting player, this portion of the film is undoubtedly one of the most entertaining.

The biggest inhibitor to Mansfield 66/67’s success are the segments involving university students performing staged pieces designed to function as a Greek chorus on the unfolding events. Unfortunately, they lack the professional quality of the rest of the film and attempts to render these sequences in the same groovy image as the archival footage only makes them jar all the more. Regardless, Mansfield 66/67 is a solidly entertaining documentary about a hugely compelling subject.

Mansfield 66/67 was out in cinemas across the UK on May 11th. It’s available for digital streaming in July.

Luchino Visconti’s muse and lover is now a paranoid septuagenarian recluse, but he remains as manipulative and obstinate as ever - find out more about Helmut Berger's outrageous personality in this documentary at the Open City Documentary Festival [Read More...]