"Filthy genius movie"
The White House versus the press. Set in the 1970s, Steven Spielberg’s journalistic epic tells the story of The Washington Post and the Pentagon Papers – available for digital streaming

In 1971, The New York Times broke the story of the Pentagon Papers. These documents detailed how the incumbent Nixon administration and its predecessors had increased the scale of the US involvement in the unwinnable war in Vietnam for political gain rather than the national good. The administration’s response was swift and repressive: within two days, a legal injunction prevented the paper from publishing further details. The Washington Post (often shortened to The Post, as in the film title), at the time more a local paper than a national one, stepped into the breach with its reporters hunting down the New York Times’ source so that it could publish more of the story as it emerged. Having just floated on the New York Stock Exchange, the paper found itself in the tricky situation of being accountable to conservative shareholders who didn’t like the idea of exposing their investment to risks with the potential to close the paper down for good.

The two main players in this story, as envisaged by Liz Hannah’s original script, were The Post’s editor Ben Bradlee (Tom Hanks) and publisher Katherine Graham (Meryl Streep). Bradlee is the hard-nosed newshound gutted that The Times has scooped The Post and determined to make the most of the story once his rival is prohibited from further publication. Graham is the former housewife and mother who, having inherited The Post from her late husband, is determined to make a success of it at a time when women didn’t do things like publish newspapers because their place was unquestionably in the home. 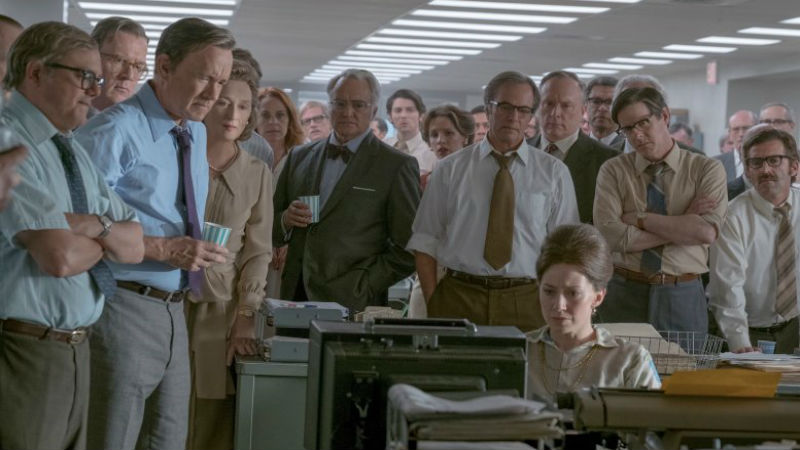 With Josh Singer, the writer of Spotlight (Tom McCarthy, 2015), brought in by producer-director Spielberg to further research and beef up the screenplay’s journalistic element, The Post feels solidly grounded in the world it purports to represent. Spielberg augments the script by finding visual ways to tell his story. His opening has Streep wake and sit up in her bed causing files of paperwork to drop off the coverlet onto the floor. We immediately know Graham is a woman who prepares thoroughly for her work.

Spielberg mines extraordinary performances from his two leads and his excellent supporting cast. An almost unrecognisable Hanks convinces as the quick-witted, determined and conscientious editor who more than meets his equal in his quick-to-learn, publisher colleague. Streep’s role is arguably the more challenging one: Graham finds herself in a place where women simply weren’t found back in the 1970s, in a world of men feeling her way through tough business situations as they present themselves. Moreover, she’s on friendly terms with the powerful likes of Defence Secretary Robert McNamara (Bruce Greenwood) and realises that she will have to choose between looking out for old friends and sticking up for the truth by publishing facts and stories which may run counter to those friends’ best interests. 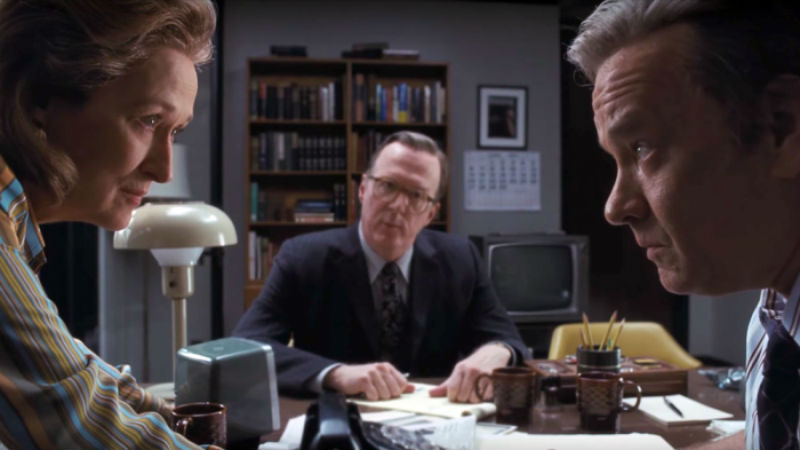 Comparisons will be made with classic journalistic thriller All The Presidents’ Men (Alan J.Pakula, 1976) which takes up the story at the Watergate break-in at the point where The Post leaves off. Indeed, Spieberg’s film ends with almost identical shots to those which opened Paluka’s. However, the latter was primarily about two reporters chasing a story whereas the former is more concerned with what makes a newspaper tick in terms of the differences between an editor’s mind and a publisher’s. Pakula’s conspiracy thriller takes place in an all-male environment where women are never more than minor players, whereas Spielberg portrays a part of that all-male environment having to deal with a smart and savvy woman engaging with them on her own terms, something it really isn’t used to.

Moreover, whereas Pakula’s movie only dealt with events from a few years before, Spielberg’s retelling of history from over 40 years ago speaks volumes to the present day when the incumbent President wants the media to regurgitate his own, often contentious version of events rather than seek to present objective truth. Two images stick with the viewer long after the film has ended: typesetting printing blocks spelling out “freedom to publish” in the ready-to-roll newspaper presses and the President as a distant figure glimpsed through a window barking angry orders into his phone. This pre-digital US of the 1970s echoes the present day.

The movie reminds us that the US news media exists for the benefit not of the governors but the governed. Because this is a Spielberg movie and therefore by default popular entertainment, that notion will be widely seen by a mass audience both at home and abroad – as indeed it deserves to be – and that’s a pretty big deal.

The Post is out in the UK on Friday, January 19th. It is available for digital streaming from May.

Fired up, ready to go? Documentary about Obama's last year in office provides a fascinating peek into the lives of the then president and his associates, and reflects whether the message of "hope" can survive the current tenure; sadly the film also lacks a little balance - in cinemas [Read More...]

Ears without a face: French political thriller about a secret transcriber has flavours of 1970s conspiracy theory and Latin American cinema - in cinemas this week [Read More...]