"Thoroughly sanitised movie"
Not so crazy about it... This British Amélie Poulain wannabe is set in posh North London, but it lacks originality and its depiction of mental health illness is borderline offensive - on VoD March 5th

This Beautiful Fantastic tells the story of Bella Brown (Jessica Brown Findlay), a young aspiring writer who lives in a pretty Belsize Park flat and works at a local public library. One day, her landlord delivers the news that Bella must tidy her overgrown garden, or face eviction. Sadly, our shy protagonist has a paralysing fear of flora. Thus begins a bafflingly artificial plot in which Bella takes on her month-long gardening task with the help of Irish house cook Vernon (Andrew Scott), cantankerous neighbour and long-time horticulturalist Alfie (Tom Wilkinson), and dashingly posh inventor Billy (Jeremy Irvine). In a glaringly obvious move, unlikely friendships are formed and Bella brings her colourful inner brightness to everyone around her.

The narrative setup evidently intends to mimic that of a fairy tale. Characters are flat, inhabiting a specific role – naïve hero, lovable sidekick, malevolent villain and knight in shining armour. Bella was raised by ducks and writes fantastical children’s stories. Yet, in spite of these archetypes and not-so-subtle hints, This Beautiful Fantastic never fully commits to what it purports to be. The film urgently needs a dose of magical realism to elevate its half-baked conceit into something the viewer can believe.

Instead, we’re pummelled with relentless quirkiness. Bella has had an unconventional upbringing and maintains her life with painstaking precision. Alfie is the irritable widower that time forgot, forever stuck in the days of British imperial majesty. And Billy has the floppy-haired charm of an eccentric, the kind of man that continuously forgets that he’s not allowed to eat pickled eggs in the library. In principle, this is fine. It lacks originality and is nauseatingly twee, but this isn’t a film that aims to push boundaries. 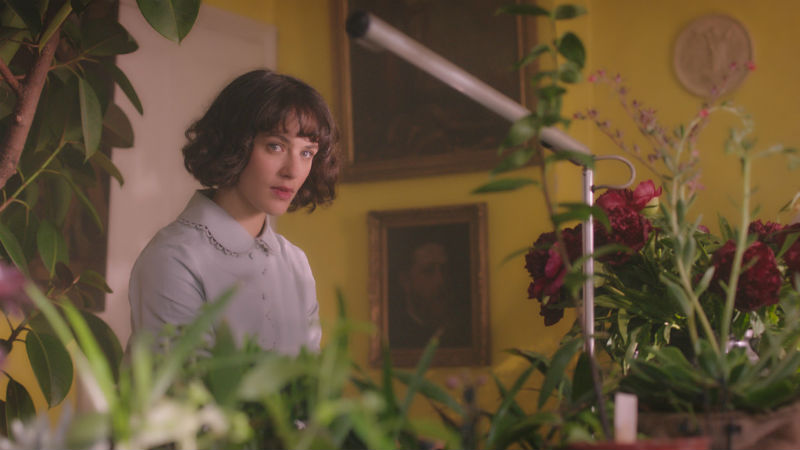 However, the character quirks don’t quite hit the mark. This Beautiful Fantastic pitches itself as a light-hearted romantic drama, yet the humour is regularly ill-placed. Take the relationship between two of its central characters. Vernon is a working-class Irish house cook employed by the wealthy older English gentleman Alfie. It’s an unhappy working partnership, one in which Vernon feels underappreciated by his cold-hearted boss. Usually, a film of this type would bring some comedic levity to a potentially bleak situation. On the contrary, This Beautiful Fantastic gives us bizarre banter where Vernon mentions that “slavery was abolished in 1834” and Alfie quips back that “this country’s been going down the drain ever since.” Even if we ignore the fact that the Irish were historically enslaved by the English, this joke just isn’t very funny and reflects the quality of the broader script. We can perhaps forgive a few bad jokes, but the treatment of Bella becomes particularly problematic as the film develops. Whether it’s her soup tin arrangements or precise punctuality, it’s crystal clear from the start that Bella is obsessed by routine and order. In fact, quite early on it appears that she’s displaying symptoms of obsessive-compulsive disorder (OCD). Rather than give this psychological condition any respect or meaningful exploration, it’s side-lined as a weird quirk of personality. Ultimately, it’s only ever referred to as a negative trait: as an oddity, a madness or a dysfunction.

This is jaw-droppingly awful and results in a confusing tone that mixes enchanted garden escapades with outdated offensive stereotypes. The plot of the film is beautiful enough, if you’re a fan of quintessential English quaintness. Regrettably, its muddled humour, treatment of mental health and unfathomable fairy-tale ending are far from fantastic.

This Beautiful Fantastic is available to watch on all major VoD platforms on March 5th.

Dare to Be Wild

Power to the flower: biopic of Irish landscape designer Mary Reynolds provides a plush and superb portrait of nature, but does not analyse the broader impact of her work in detail [Read More...]