I was looking forward to this film. Not only had I never seen a Barbadian film, but this one was also made by a young black and female filmmaker. I went with an open heart, but unfortunately I was very disappointed. Despite making an interesting statement about interracial marriage, very few elements of A Caribbean Dream are redeemable. Ultimately, this is a clumsy film.

I confess that my knowledge of Shakespeare is limited and I have never read A Midsummer Night’s Dream, but this shouldn’t be mandatory for a film which only claims to be inspired by the bard. It introduces some of the Caribbean’s supernatural legends such as Papa Bois, Douens and Wata Mama into the famous Shakespeare piece, and even the emblematic Nigerian King Jaja makes it into the story. The action takes place in modern-day Barbados, where a music and arts festival is taking place. The problem is that the script is highly convoluted, and the outcome is a little fragmented and disjointed. Sometimes the action is hardly intelligible. 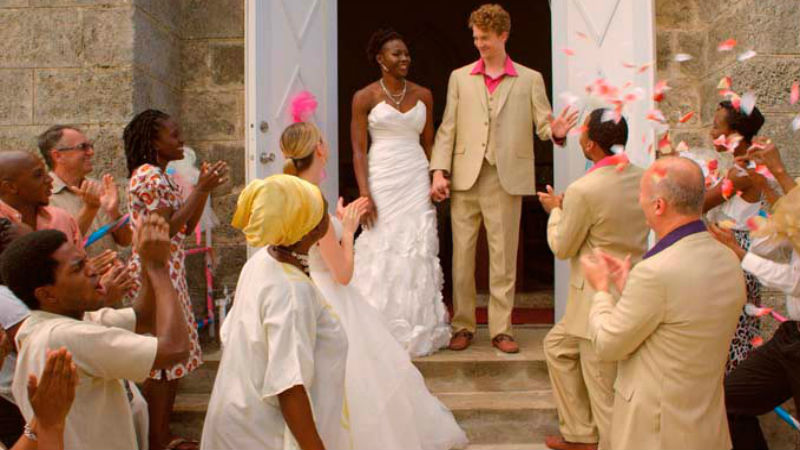 Despite the fact that the film was made by a local, it often looks like an infantile colonial caricature, with jolly local eternally prancing around. Predictably, all the poverty is sanitised and the film climaxes with multiple interracial marriages. It feels a lot like a sycophantic imperial allegory, where oppressor and oppressed make up and live happily in peace.

Plus the settings and the visuals effects are very primary school, with trailing glittering lights and spinning kaleidoscopic images. The lighting is poor, and so is the make-up. And the actors aren’t highly skilled. The soundtrack reminded me of The Little Mermaid (Ron Clements/ John Musker, 1989), and I could almost picture the sea creature playing the shell-xylophone in front of me. Oneiric is not a lame excuse for tacky. It feels like a cheap folkloric and touristic advert.

A Caribbean Dream is out in UK cinemas on Friday, November 10th. It’s rather surprising this film has received UK distribution.

'Til death do us part: the tragic love of Romeo and Juliet is a metaphor for the Rwandan genocide, and it also offers hope for the orphans of the tragedy - in new documentary right now at the Sheffield Doc Fest [Read More...]

This Mexican tale of transvestism, singing and murder has an interesting topic, beautiful actors and a fascinating backdrop, but it lacks intensity [Read More...]