"Dirty gem"
All about my motherland: young artist opens the painful wounds of Kosovo's recent history and rescues his country's collective memory with a very personal and intimate documentary - from DokuFest

Preoccupied with the politics and history of his country and the dramatic sociopolitical changes that took place during the 1990s in the Balkans, Art Haxhijakupi has created a very personal movie, offering a very exciting glimpse into Kosovo through the eyes of a local artist.

This 40-minute featurette combines a vast spectrum of archive material from the 1990s: from television footage of national pop singers to videotapes depicting the director’s family circle and his own childhood. It begins with a very intimate scene: a young girl, probably a friend or relative, facing the camera and passionately warbling a song in a relaxed family environment. Later on, we come across various VHS clippings of popular singers from the 1990s, such as Adelina Ismajli and Shyhrete Behluli. 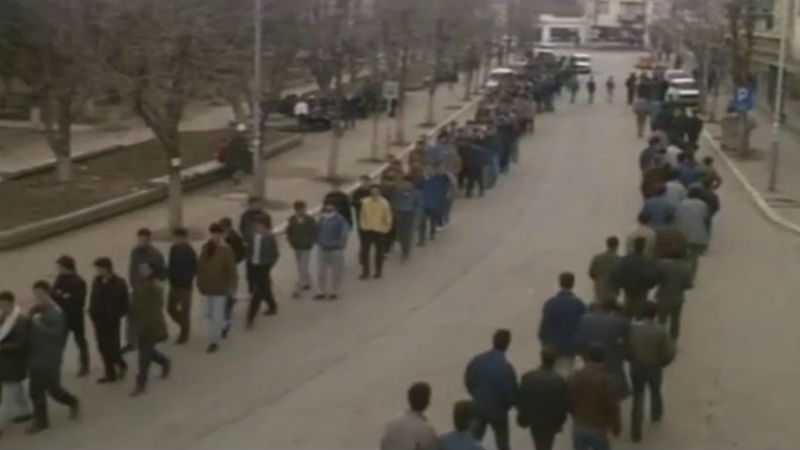 The dialogue is very limited and there is no voice-over. Instead, the audience sees a juxtaposition of various archive pieces providing some useful insight into the country’s culture as well as into the fragile political landscape during the last decade of the 20th century. We view scenes of the police oppression against demonstrators, symptomatic of a very young and volatile state. Tanks and soldiers shooting rockets bring back painful memories of the dark days of a recent past.

This documentary film doesn’t follow a linear narrative; the various archive images have been collated arbitrarily, it seems. This is a fascinating peek into everyday life in this newly-formed and troubled country two decades ago. There is a lingering feeling of nostalgia throughout. Like the title suggests, this doc is a complex mosaic of memories. It is also a personal investigation reflecting the director’s childhood as well as the collective memory of the Kosovan people. Ultimately, it establishes a dialogue about national identity and history, and offers an opportunity to rediscover and reclaim a hurtful past.

The film director Art Haxhijakupi is one of our favourite dirty boys. Click here in order to find out more about the young artist.

Lina Samoili is a Greek writer, researcher and film selector based in London. She moved to the UK in 2012 in order to study film and pursue a career in cinema. After completing a Masters degree in Fil...

The red Danube: the wounds of genocide carried out by Milosevic in the Balkans show in the walls, on the land and even in the waters of the River Danube - hypnotic documentary entrances audiences and takes home the main award at the Open City Documentary Festival in London [Read More...]

One of the most vibrant and diverse documentary film festivals in Europe kicks off again this week in the very quaint and charming town of Prizren, Kosovo; check out our lowdown on Dokufest! [Read More...]