"Greasy movie"
One man and his BRAY-ve companion: touching doc about an old Spaniard, his donkey and their insatiable wanderlust is a tribute to kindness and resilience - in cinemas Friday, October 26th

This bucolic documentary by Spanish filmmaker by Chico Pereira follows the footsteps/hoofsteps of the elderly Spaniard Manolo and his lifelong companion Gorrión (“Sparrow”) the Donkey, and their monotonous life, roaming the countryside of Southern Spain. Retired and with a strong bond to his animals, he dreams of doing a ‘long walk’ someday – this turns out to be none other than the 2,200-mile-long Trail of Tears in the American West, a route indigenous people were forced to walk after their involuntary removal from the Mississippi River.

One of his daughters, Paca, knows he has been planning for the event for a long time. Fearful for his physical health, she raises her concern about his lack of technological savviness, which could be a problem in case he needs ask for help during such a long trip. Their interaction is fairly amusing and endearing. She knows how ill-judged and stubborn her old man can be, so she decides to step in order to help him. 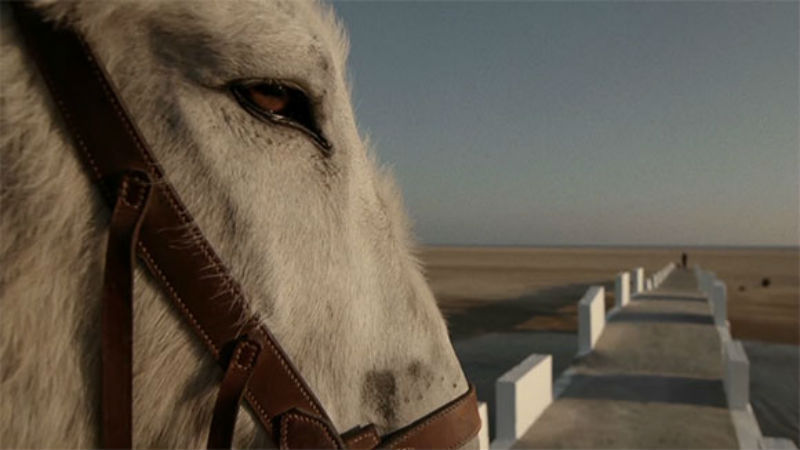 The idea of shipping a donkey across the Atlantic seems like a long shot, but Paca convinces her father about making an advert on video selling his idea to a company. His search for a sponsor is one of the many heart-warming moments of the feature. When he blindly sets off to the horizon with Gorrión and one of his dogs, the spectator does not know what is going to happen. But we do believe in Manuel’s resolute ambition and his undertaking of this trip, and that is truly inspiring to watch.

Despite the director’s attempt to make the journey feel quite idyllic, ultimately we are just watching a 73-year-old man’s willpower and desire to keep on ‘walking’ and ‘moving forward’, being the wanderer that he was always supposed to be. Manuel is here to teach our increasingly sedentary society: set yourself on path and stand firm on your journey, wherever it might take you.

Donkeyote showed in August 2017 at DokuFest, in Kosovo, when this piece was originally written. It showed in September 2017 as part of the Open City Docs Film Festival in London. It’s out in UK cinema on Friday, October 26th 2018.

Click here for our review of another touching film about an old man taking his beloved and very large pet to another continent.

MOOO-ving tale of a man and his bovine: Algerian peasant takes his much-adored animal to an agricultural competition in Paris, and the culture clash becomes immediately evident - now on all major VoD platforms [Read More...]