"Filthy genius movie"
Guess who's behind the wheel tonight? Baby and his music. He's in the hands of fate, but he's not going to hand himself over on a plate - dirtiest music thriller of the year is in cinemas now!

Baby (Ansel Elgort) is a getaway driver so good that criminal mastermind Doc (Kevin Spacey) uses him every time even though Doc never uses the same crew twice. Baby doesn’t listen to instructions. He listens to music 24/7 on his iPod. This includes when he’s at work. He doesn’t need to listen to orders, either. He can lip read. He has to, because he and his cherished, ageing, deaf foster father (CJ Jones) communicate in sign language.

This is a character and indeed a film driven – no pun intended – by music. Far from being an empty exercise in style, Baby Driver is about a damaged loner’s interior world. Baby knows exactly how long is each piece of music on his iPod. So he uses (for example) The Damned’s song Neat Neat Neat as a template around which he synchronises to the second his meticulously planned automotive getaway journeys.

When the sync is disrupted, he stops his iPod, rewinds a few bars of music and presses play to carry on the fully choreographed getaway. As the narrative proceeds and the world around Baby starts to spiral out of control, his music library remains his one constant until that, too, is taken from him. 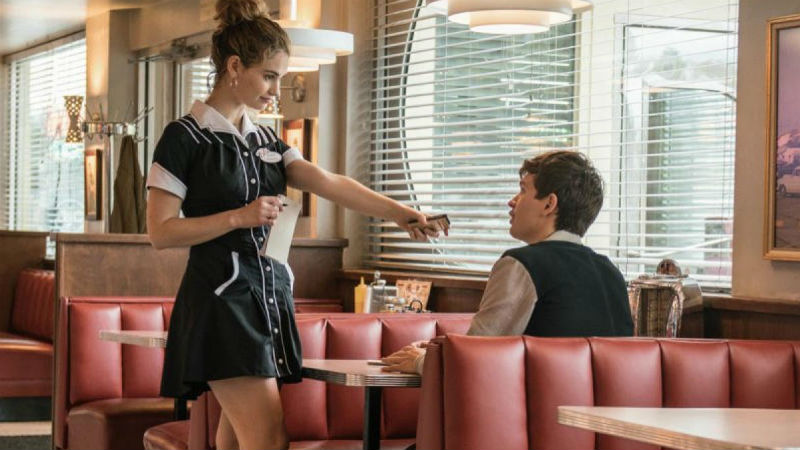 Many elements threaten to disrupt Baby’s can’t-put-a-foot-wrong existence. The bad ones all seem to relate to cars. His childhood involved his parents in a car crash. Doc observed Baby stealing Doc’s car, which is why Baby is now working for Doc (in order to repay the debt). One last job and everything’s repaid. But Doc isn’t going to let go his regular driver so easily. He insists Baby take more jobs, further breaking Doc’s own rules to reunite his driver with his former crew of Buddy (Jon Hamm), Darling (Eiza González) and Bats (Jamie Foxx). Bats has a nasty habit of killing people and Buddy and Darling plan to kill Bats once the job is over.

To muck the situation out still further, enter Debora (Lily James), the diner waitress whose dream is to drive across the country listening to music without looking back. Baby wants to help her live that dream, but if the others find out he’s sweet on her, the whole thing will turn into a nightmare. 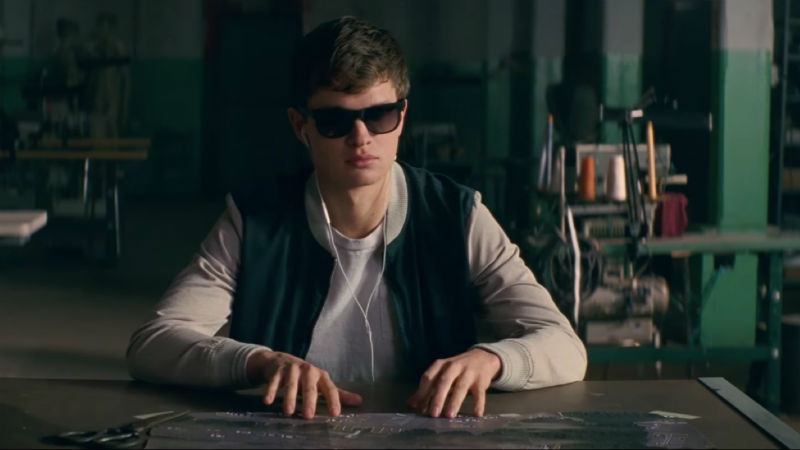 Playing fast and loose with every cliché you’ve ever seen in a gangster or a heist movie, the piece turns those genres on their head as stunt choreography, violent shoot-outs and breakneck car chases are upstaged by a boy meets girl romance and back again. And all edited to die for to the strains of a well thought out music soundtrack. Writer-director Wright fully understands the many genres with which he’s playing in order to deliver far-beyond expectations in all of them.

It’s a movie which looks shiny and clean on the surface, just like a fast car. But lift the lid of the bonnet and you’ll find dirty Baby sitting there like an overly powerful, supercharged motor fitted in the wrong vehicle. Should he find himself or his newfound lady love on the bad side of his fellow gang members, you know there will be trouble. Behind its facade of escapist entertainment, Baby Driver deals, on a near subliminal level, in dirt. A thoroughly subversive vision.

Baby Driver is out in UK cinemas on Wednesday, June 28th.