"Greasy movie"
How the King of Cool fell from grace: how extreme masculinity overconfidence, perfectionism led Steve McQueen's fall from grace - on DVD, Blu-ray and digital

A story about obsession, backstabbing and fast cars. Steve Mc Queen: The Man & Le Mans has all the ingredients of a melodrama. Instead, we’re presented a classic tragedy. The elements, such as the daunting task and the counterforces preventing it from happening, are all here and they play out neatly.

One key factor, the “hero” is missing, though. McQueen was a man who lived in the constant mission of bridging the gap between himself and his onscreen persona. In this process, people got hurt, especially so during the making of his 1971 picture Le Mans (Lee H. Katzin), documented here. The film, envisioned to be the ultimate racing picture, ended up marred by production conflicts and ignored by mainstream audiences.

Hollywood has a penchant for mythmaking and the documentary brings forward quite a Tinseltown story. It shows how McQueen, one of the most bankable film stars of the late 1960s and a gearhead, set himself on a path towards failure. During filming, the actor ruined his marriage and ended the partnership with his most trusted writer, for example.

The most interesting aspect of the film, however, is the myth-busting. For contemporary eyes, it reveals one of the symbols of extreme counterculture masculinity. The “King of Cool” was a persona doused in blasé, womanising and elitist qualities that eventually took over his life. In an interview, he relates his passion for racing to a pleasure of being in position of power. To listen to him say that with that clarity shows how much masculinity has played a part in pop culture. 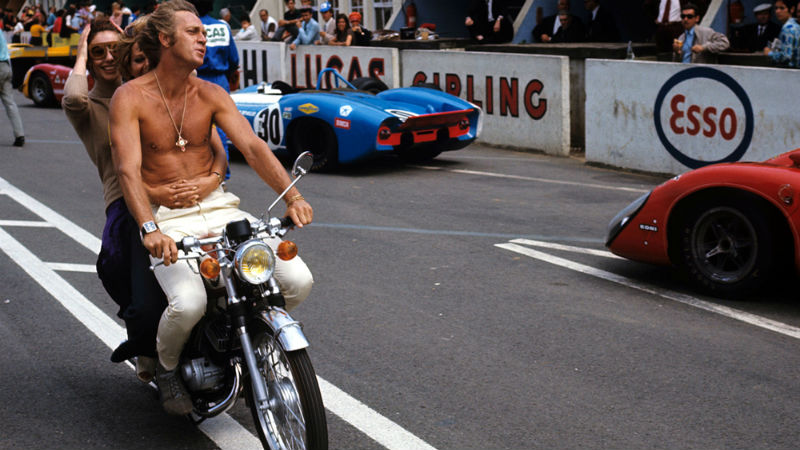 Not that everything onscreen feels vintage. Compared to today’s superhero blockbusters and endless remakes, the production seemed refreshing. By 1970, the New Hollywood movement was in full swing. It allowed for studios to take risks with original material that would be unthinkable nowadays.

Of course, this came with a price tag, both literally and metaphorically. The sheer confidence of the studio in McQueen’s star power lead them to greenlight a project without a script. That, combined with the actor’s obsession to racing details and inexperience with production, became a recipe for disaster.

Helmers Gabriel Clarke and John McKenna do a good job re-enacting this drama. Instead of relying just on interviews with key people (though there are plenty), they go somewhere else. Many sequences are deliberately sensory, such as the retelling of car crashes. Others, like in-set conflicts, seem to come straight from the radioplay transition, to astonishing results.

By design, Steve McQueen: The Man & Le Mans may resonate louder with fans of the actor and of racing. But every member of the public can understand the significance of a fall from grace. It’s one of mankind’s most enduring narrative threads, after all.

Steve McQueen: The Man & Le Mans has been made available on DVD, Blu-ray, as well as VoD on Amazon, Google Play and iTunes.

Click here for our review of another film that conveys a very different sense of extreme masculinity.