The Freedom to Marry

"Mostly clean movie"
Freedom comes at a price: oc investigates the events that preceded the ruling that legalised gay marriage across the US, and the role of the eponymous organisation in the struggle - available now in the US and Canada

Rewind two years and follow the lead up to the Supreme Court of the United States ruling that legalised gay marriage in all American states – that very moment was the pinnacle of the struggle of the organisation that lends its name to the film title. Plus follow the life and work of activists during more than 30 years. The Freedom to Marry looks into political and social process of lawmaking rather than the subject of the legislation and implementation.

One of the interviewees is Evan Wolfson, president of the Freedom to Marry and a lawyer at the forefront of the gay marriage issue in a America for the past three decades. An eloquent and knowledgeable speaker, he explains to the viewer, at a certain point, the wordy root of what the movement he presides fights for: “By claiming this vocabulary of marriage, we would be achieving an engine of transformation that would help change non-gay people’s understanding of who gay people are”.

Unfortunately, as much as it is refreshing to meet about who struggled for so long for this achievement, a lot of what could’ve been a really deeply analysis gets too narrowed down. A chronology on the important events that happened before Freedom to Marry was founded, such as the Stonewall riots and the Aids crisis, is presented briefly, which leaves the fight for same-sex marriage devoid of a broader context. This could distort the full picture for those not familiar with the subject. 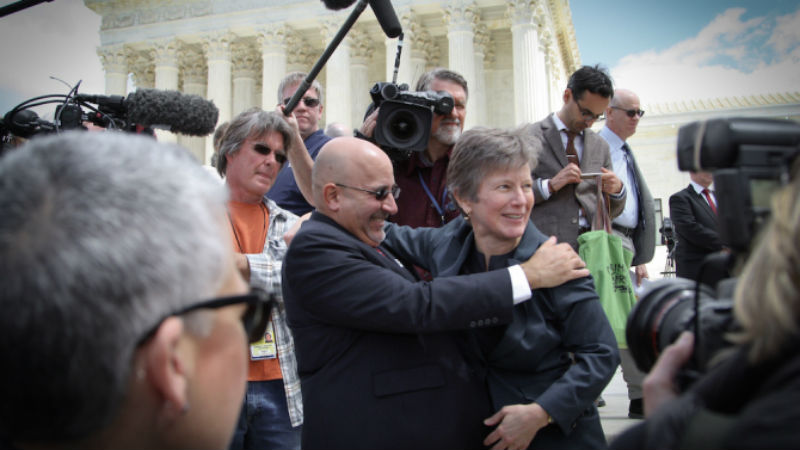 Of the couples that went to the US Supreme Court to settle the legitimacy of their union, we just really get to know one (April DeBoer and Jayne Rowse, from Michigan), with the rest of the screen time devoted to the planning of demonstrations and media outings done in the organisation headquarters, which sometimes feels bit anticlimactic.

In one scene, we see a female activist confronted by religious fundamentalists who. After arguing with passion for her cause, she breaks down and cries in frustration. The woman is then interviewed, and the impact is analysed in retrospect, which takes way the heartfelt spontaneity of the action. The film makes a case for the devotion and hard work of people in PR campaigns. Overall, it comes across as a little esoteric.

The Freedom to Marry. In terms of an assessment of LGBT history, this does not have the incendiary diversity message of Paris Is Burning (Jennie Livingston, 1990), but ultimately it succeeds in being a useful PR case study for the dotcom era. The movie was released in the US and Canada via Ro*Co Films on June 6th on VOD and across digital platforms including iTunes, Amazon, and Google Play.

Click here for another documentary on gay marriage, from another large country across the pond from the UK.