Can hope and joy be a subversive act?

How is it that beauty and happiness could be a violation of the Russian Soul? Lara Cetinich Cory looks at the classic Dr Zhivago and its indelible leitmotif Lara's Theme and how they affronted the spiritual values of a nation

As the centenary of the Russian Revolution looms, the enigmatic myth of the Russian soul is as potent as ever. First coined in 1840s by literary critic Vissarion Belinkskii and Nickolai Gogol, ‘Russian soul’ was an intellectual and literary term adopted to express the inexplicable paradoxes at the heart of the Russian people. It began in earnest, as an attempt to help the masses shape their own national identity, a concept that had been previously been dictated by rulers and the elite.

Where the Italians are known for their indulgence in la dolce vita, the Russians have a saying that “suffering purifies the soul”. In pre-Revolution Russia this meant that the pursuit of happiness, beauty and pleasure was an affront to Christ’s suffering. In the collective consciousness self-denial and austerity were coveted virtues. In A Writer’s Diary (1873), Dostoyevsky explains “the most important, most rudimentary spiritual need of the Russian people is the need for suffering, constant and unquenchable, everywhere and in everything.”

After the revolution in an atheist, communist climate, the Russian soul took on a different meaning. Suffering like Christ became suffering for the greater good, and in post-war Russia, the official cultural stance was socialist realism. The welfare of society, collective thinking and utilitarian impulse was what it meant to be a good Russian and their art and literature would come to reflect this. But for Boris Pasternak, the Russian soul was not about suffering domination of the spirit. For him it meant individuality, beauty and above all, hope. 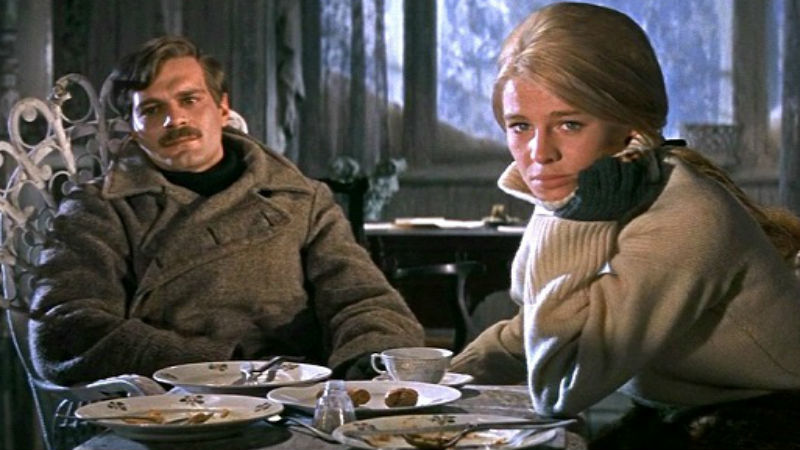 These attitudes were considered at the time to be anti-social and subversive but Dr Zhivago was hinged on those very themes. Unsurprisingly Pasternak’s manuscript was rejected for publication in Russia. It was covertly published Dr Zhivago in Italy, 1956 and the novel subsequently became a political tool for the US during the cold war. While it won a Nobel Prize and is commonly considered a classic, it was criticised by Pasternak’s peers, paling in comparison to the work of Pasternak’s idol (Tolstoy) and forbears. And while the British filmmakers David Lean’s 1958 adaptation to cinema won many awards, and the adoration of the public, it was not received enthusiastically by critics.

Even today the film is condemned for its shallow, Anglicised interpretation. Richard Roud’s film review for the Guardian felt that the revolution was “reduced to a series of rather annoying occurrences; getting firewood, finding a seat on a train, and a lot of nasty proles being tiresome. Whatever one thinks of the Russian Revolution it was certainly more than a series of consumer problems. At least it was to Zhivago himself.” It is exactly in the observance and appreciation of the minutiae, mundane routines, daily tragedies and natural beauty that are the essence of Dr Zhivago.

To Pasternak these moments were not to be suffered through. To him they represented beauty, passion and the personal, inner life of the individual and in post-revolution Russia, these ideals were trampled by the machine of communism and actively denied by the state. Both Pasternak and Yuri Zhivago looked beyond the suffering, saw past the homogenous utilitarian facades and saw life, blooming and flowering in the shadows.

Both David Lean’s treatment of the source material and Maurice Jarre’s iconic score have been accused of being sentimental, tedious, soppy, ersatz and populist. Critics said Lean’s film was about as un-Russian as it could be; perhaps it was merely some very expensive propaganda. But despite all the inaccuracies Lean and Jarre succeeded in showing us, perhaps the most authentic window into the Russian soul of Pasternak’s era. 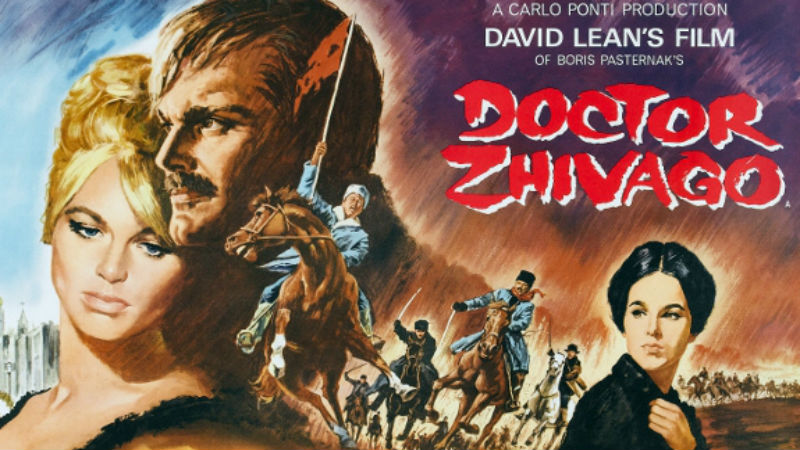 Not just a song for the lovers

Lara’s Theme is the title of the iconic leitmotif from Maurice Jarre’s Oscar-winning soundtrack. Its ubiquitous use throughout the film drove critic Roger Ebert to distraction and according to Laurence E. Macdonald’s The Invisible Art of Film Music: A Comprehensive History it’s reduced to serving one simple purpose, identifying with Lara and Yuri’s thoughts of her. However, both Ebert and Macdonald missed the point. The real purpose of Lara’s theme conveys so much more than a love affair.

While Julie Christie plays a beautiful portrait of this character, it remains just that – a portrait. Resulting in not much more than a plot device Lara merely adds conflict and crisis to Yuri’s story. It’s what Lara and her theme represent that’s far more significant. Lara’s theme is not exclusive to Lara and Yuri; we hear it first before Lara becomes an object of desire, and before she is even introduced at all.

When young Yuri stands at his mother’s grave and the earth is shoveled onto the coffin, Yuri envisages his mother’s lifeless body lying peacefully inside the coffin after which he looks up into the sky and watches the wild wind blow the dead leaves from the tree. The delicate motif is juxtaposed momentarily against the stark misery of the scene and from this first instance, it becomes clear that Lara’s theme actually belongs to Yuri. It mirrors his taboo thoughts of beauty and hope in the face of suffering and it is pervasive throughout the film because Yuri’s outlook is equally so. 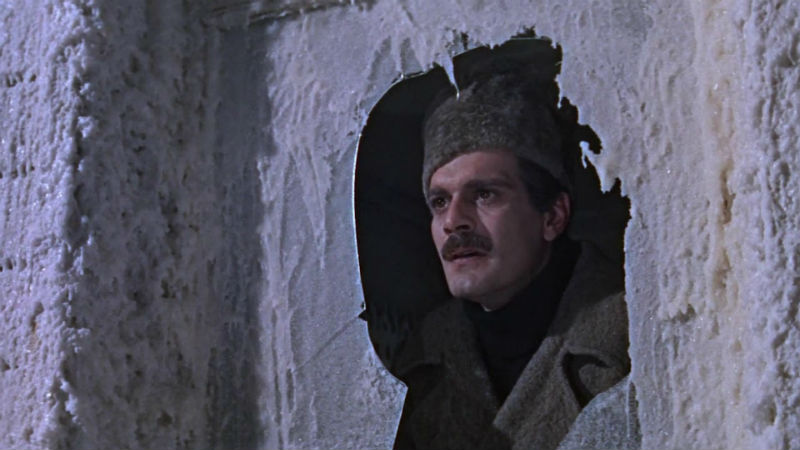 Happiness is a violation

During the film Yuri is told by a soldier, that “the front is where ever there are enemies of the revolution… where ever there is one dubious poet hugging his private life.” When utility was beauty, and equality and social welfare was Divine, who would dare feel the need to hope for more or for better in the new, Soviet Union? What use is your personal life, your individuality compared to the greater welfare of the State? While Yuri may have wanted reform, he was opposed to communist oppression with his heart and soul.

The theme, like the character of Lara, is a thing of beauty and light against the bleak, misery of a misguided revolution. We hear it whenever Yuri indulges in private flights of forbidden fancy, whether he’s appreciating a dawn sunrise in the midst of a harrowing winter train journey or seeing the delicate ice patterns on a window and dreaming of Lara. It plays when he is faced with the shock of discovering Lara and Komorosky’s affair, when he tends to the wounded after a march massacre. To Yuri, survival and decay, disappointment and joy are all part of the poetry of life.

What Dr Zhivago revealed was the fact that joy, beauty and hope were subversive violations of the establishment and this is what Lean conveyed so thoroughly through the clever use of Jarre’s indelible theme. Dr Zhivago, both film and book, were condemned by critics and beloved by the public. Perhaps the collective mind better understood the complex, delicate and perverse nature of Pasternak’s Russian soul where joy, beauty and hope were subversive, authentic expressions of national identity.

Click here for our review of the recent Russian film A Gentle Creature (Sergei Lornitza, 2017), and a very different view of the Russian Soul. 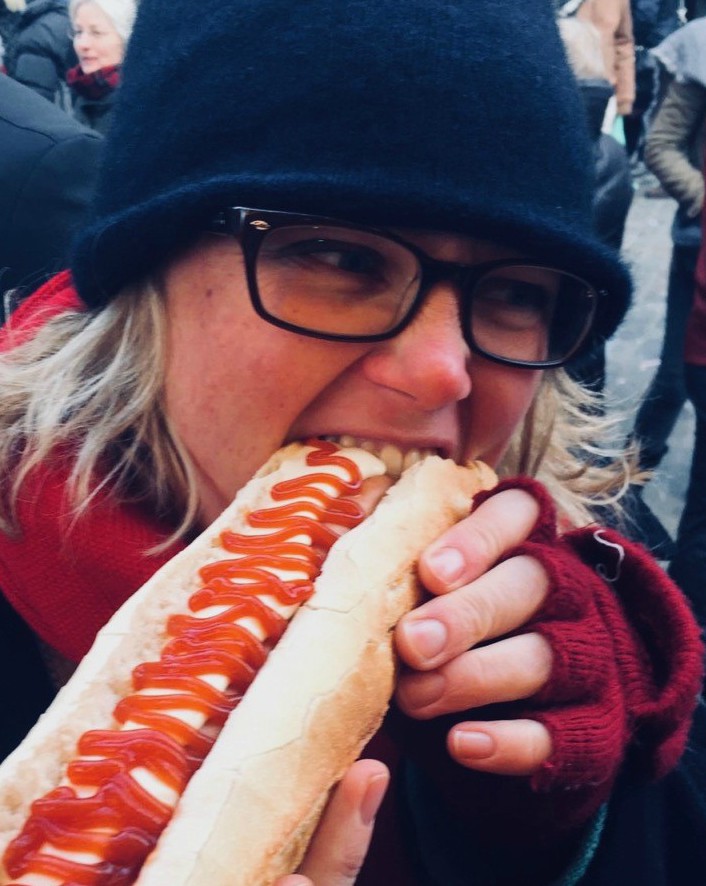