"Dirty gem"
A docudrama covering the 2013 Boston Marathon bombing, the citywide manhunt that ensued and the lives of professional and ordinary citizens caught up in that day and its aftermath - now on iTunes

Three people were killed, dozens injured and the city’s wider community felt the impact of the terrorist attacks of the 2013 Boston Marathon. Eschewing a straight documentary approach for a dramatic one, Patriot’s Day portrays numerous real characters while Mark Wahlberg’s character combines several police officers into one. Propelled by Wahlberg’s serving one last day in uniform patrolling the Marathon to please the powers that be, the opening is skilfully set against the backdrop of the day’s festivities. The authorities make routine crowd control preparations, people make their way through the crowds to find a good vantage point. Unbeknown to either, two men take rucksacks containing bombs through the crowd to leave them where they can cause maximum damage.

As in real life, the actual blast sequences occur and are over very quickly. Even though the audience knows these are coming and is on some level prepared for them, they are still a shock when they come. Berg brilliantly captures the sense of both ordinary people’s confusion and the authorities trying to work out what just happened and what they need to do about it.

The attention to detail impresses. For example, rather than close off the scene of the bombing, the FBI recreates it in a warehouse combining the intimate location knowledge of officers (i.e. Wahlberg) with objects taken from the scene. 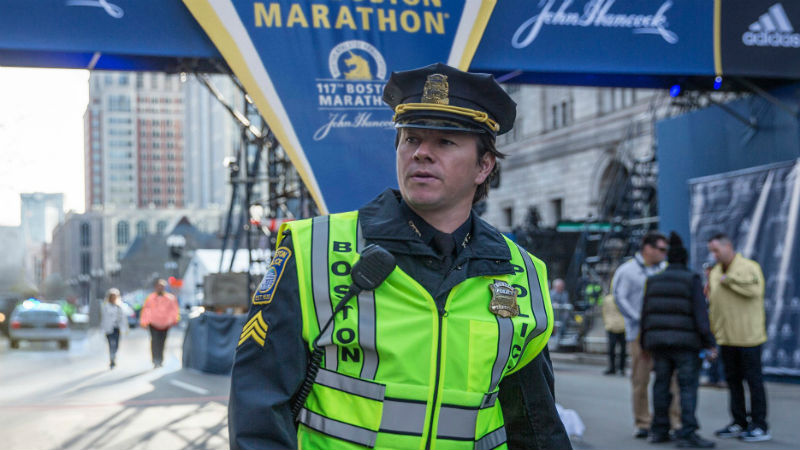 To portray the wider tapestry of events, separate storylines follow characters such as Dun ‘Danny’ Meng (Jimmy O. Yang), a Chinese-American tech worker who later in the narrative is carjacked at gunpoint by the bombers in his beloved SUV, a frightening ordeal to which it’s pretty easy to relate. This brief and effectively understated episode succinctly documents his moments of self-preservation and ordinary heroism.

The same is true of a shootout between the two bombers and local cops in the sleepy Boston suburb of Watertown, graced by J.K.Simmons’ edge of the seat performance as Sergeant Jeffrey Pugliese who ends up wrestling one of the suspects to the ground.

It’s not that these two performances are better than any others – there are many, many bit parts boasting good performances subservient to the wider narrative canvas.

The dozens of stories on display range from pivotal figures played by big stars (John Goodman as the Police Commissioner, Kevin Bacon as the FBI’s man in charge) to Christopher O’Shea and Rachel Brosnahan as the two newlyweds Patrick Downes and Jessica Kensky who lose their legs in the blast. Even the bombers are portrayed as complex, nuanced characters although the film rightly does nothing to condone their actions. Both behind and in front of the camera, you feel that everyone involved, be they film professionals or regular Bostonians pitching in, did everything they could to accurately represent the experiences and events portrayed here. The results are compelling.

Patriot’s Days was out in the UK on Thursday in February, and it was made available on iTunes in June.