In a hotel room, sitting on two beds at right angles to each other, she says to him: “you won’t be too controlling, right? I don’t want anybody interfering with my life.” Then he sets out his own stall. “I’ll eat whatever you cook me,” he says. “When necessary, I’ll take a bath immediately.” You get the impression that that might not happen all that often.

Played by Turkish singing star Nurcan Eren, Suna craves the security of a relationship without any of the male domination that so often accompanies it. The man she has chosen, Veysel (Tarik Pabuccuoglu), has recently become a widower and wants a companion and partner in life. Not only that, he seems to want someone very like his former wife. He seems a kind, gentle man.

So they have an Imam wedding, a discreet Muslim ceremony with the local Imam present, which joins them in the eyes of Allah but may not have quite the same legal force as a regular marriage in Turkish society. For instance, if he dies, there’s no automatic legal provision that she gets the house.

With the help of the Veysel’s son Erol (Erol Babaoglu), Suna moves in to his house which is situated in a small, rural village. Veysel takes great delight in showing her his pair of caged budgies, which clearly mean a great deal to him.

She has worked as a cleaner and sets about cleaning up his house, which hasn’t been done for three years. A neighbour invites her to the local woman’s meeting, where you go along with a bit of money which Veysel, when asked, is happy to supply. But in the event, she goes out for a walk along the beach instead. 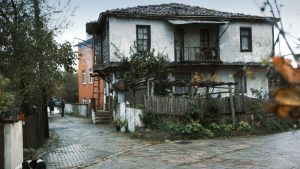 She enjoys walking outside, and on another occasion, when Erol is bringing the couple back from a shopping trip, she insists on being dropped off at the same place as Veysel and walking home alone. Walking home, a man hassles her, but fortunately another man comes to her rescue and sees him off. Her rescuer’s name is Can (Firat Tanış) , and they hit it off.

She seems to have more in common with Can than she does with Veysel, and often drops round to visit and chat with him. It turns out that he is a film critic, and in their conversation it emerges that she played parts as an extra in movies in Germany. She also visits a local restaurant bar, and one night stays there for sex with the owner, who, it turns out, has violent tendencies and likes inflicting pain on women during sex. It’s not clear whether Suna enjoys this, but given that she never goes back to the restaurant, one imagines not. She invents a cover story about being mugged on the way home from the women’s meeting earlier in the day to explain bruises on her face and neck.

As an independent, older woman in a deeply conservative society, Suna is in a difficult position: it doesn’t look like things are going to end well.

Fairly early on, a static image fills the cinema screen, a tapestry hanging on the wall with a picture of a peacock. On the soundtrack can be heard Veysel;s grunts and groans as he has sex with Suna. ‘With’ might be the wrong word: ‘to’ might be more accurate because we hear no noise emanating from her, the obvious assumption being that she is simply lying back as he takes his pleasure with no regard for hers. Aside from a shorter rerun of this scene, the other similar scene here is at the restaurant bar, where silhouettes of a rock band on a section of wall are shown while we hear the restaurant owner’s aural expressions of sexual enjoyment alongside Suna’s cries of discomfort and pain. 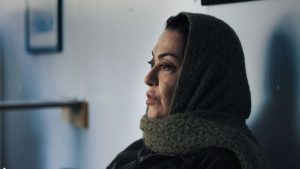 The sex scenes in this film are one of its great pleasures, although not in the way you might expect. All truly great directors reinvent the language of cinema and mould it to their own ends. Director Sezgin here has reinvented the cinematic grammar of the sex scene. It’s long worried me that actors and actresses (and more often than not, it seems to have been actresses, presumably because at least until recently, the vast majority of directors have been heterosexual men) have been required to expose their private parts to the camera and simulate coitus for it (and in rare cases, engage in actual coitus). I’m not being prudish about this, and I’m absolutely not talking about people’s personal behaviour outside of filming cinema, or morality, or anything like that – each to their own – but requiring actresses or actors to shoot sex scenes is, at least arguably, problematic. You shouldn’t be required to exposed yourself on the screen in that way, in my opinion.

Here, however, Sezgin has found an alternative way of portraying sex on camera without making any of those visual demands on her cast which works a treat (there’s a short clip of it in the trailer below, but when you watch the film, which unfolds at a very deliberate and measured pace, it has a greater impact than the little excerpt shown there). You could certainly argue that she’s borrowing heavily from the language of radio; sound, after all, is a significant component of cinema; I’d like to think that Orson Welles, in his Mercury Theatre on the Air days, would have been proud of her.

Also impressive is the portrayal of a film critic. I’ve seen this done in films before, but I’ve never seen a director get it right. On this occasion, however, I didn’t spot any gaffes, completely believed the character I saw on the screen and was delighted to have seen the film. (It’s not the primary reason I liked the film, and I realise this element is more likely to appeal to film critics than anyone else, but nevertheless, this element is a real pleasure.) The film is dedicated to the late Turkish film critic Cüneyt Cebenoyan. 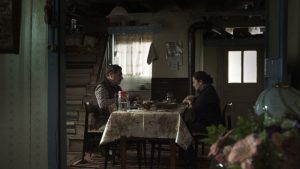 I should add that personally, as a non-Turkish speaker unfamiliar with either the language or Turkish names, I didn’t immediately cotton on that the director was a woman – although looking at the movie’s subject matter about the plight of women of a very specific age in a very specific culture the fact of her gender would have been a reasonable guess. On one level I don’t care – it’s about whether a director is competent, has a vision and can realise it on the screen. If people can tick those boxes, I’m all for it – and if they happen to be women, then fine. Sezgin, in this film, ticks those boxes.

Given that half the humans on the planet are women, and that a good number of the rest of us humans are men who find women fascinating, the story ought to be of interest to a great many people. And it is so beautifully told, and the film so rigorously constructed and shot (on a minimal amount of resources, I might add) that it deserves to be widely seen. I can’t claim much knowledge of Turkish cinema, but Sezgin’s film reminded me of the poetic realism of the likes of English director Terence Davies (notably The Terence Davies Trilogy, 1983) and The Bill Douglas Trilogy (My Childhood, 1972; My Ain Folk, 1973; My Way Home, 1978, all directed by Scotland’s Bill Douglas).

There’s a similarity in the way these visual narratives are constructed via a series of small incidents to build up a compelling picture of the ordinary life of a character. Clearly Sezgin is a woman while these other two are men, so on some level her film is going to be very different from theirs. Yet, like these films by Davies and Douglas, Suna is a masterpiece.