Only the Animals (Seules les Bêtes)

"Dirty gem"
Strangers become trapped in a strange web of love and deception, in this entertaining French drama set between two continents - on VoD in June; on Netflix in December

People deceit each other in search of love, sex, or some sort of affection. Some are so needy that they will resort to desperate, extreme measures. This multilayered blend of drama and murder thriller takes place between the snowy and idyllic mountains of Central France and the bustling and chaotic streets of Abidjan, the economic capital of Ivory Coast. It isn’t just the settings that offer a stark contrast. Our protagonists too are teeming with paradoxes.

The film is more or less broken into five episodes named after different characters (even if two of these characters happen to be the same person). The backbone of the narrative is the disappearance of Evelyne (Valeria Bruni Tedeschi), an attractive forty-something involved in a whirlwind romance with the fiery young Marion (Nadia Tereszkiewicz) while still married to an elusive old man. One day her car is abandoned in the middle of the road, and there is no sign of the driver. The police embark on a mission to find her, where they come across a number of despondent characters with a very peculiar connection to each other. 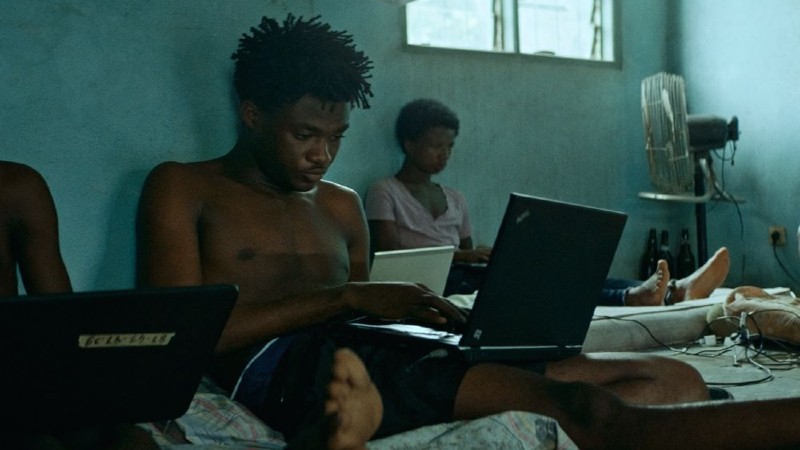 Other prominent characters include the Michel (Denis Ménochet), a surly middle-aged man in a hapless marriage, who finds a venting outlet in an online dating site. Michel’s wife Alice (Laure Calamy) also has to find fulfilment outside the marriage, and so she begins a dalliance with Joseph Damien Bonnard. Joseph, on the other hand, has a very morbid secret, and unorthodox way of conveying affection. The newcomer Guy Roger N’Drin plays Armand, a young African man who impersonates young girls online in order to raise money and buy gifts for his own girlfriend.

Where necessary, love and spirituality are monetised in the name of a greater purpose. After all, human relations are just as problematic as the relation a coloniser and its former colony (in this case, France and the Ivory Coast). Those who were formerly oppressed have now forged a symbiotic connection with those who once oppressed them.

Only the Animals has as many twists and turns as the dramatic road where Evelyne’s car is found. This elastic film is dotted small clues that gradually gel together. It’s the perfect circle of tragedies and serendipities. No one is entirely evil, but their actions can costs lives and have irreversible consequences. Characters fall into a spinning spiral of intrigues, and viewers are dragged along. A very enjoyable experience.

Only the Animals is on VoD in June. On Netflix in December