"Mostly clean movie"
A dazzling Glenn Close shines in movie about ghost writing wife and the nature of creative writing; sadly the film is lacklustre in almost every other aspect - now available on VoD

Watching Glenn Close is always a fascinating experience. Her facial features are so rugged and expressive that 71-year-old actress says a lot even with her eyes closed. Her performance in The Wife is virtually immaculate, a fine example of Oscar-baiting. She’s feminine without conveying a sense of vulnerability. She’s demure without being submissive. She’s also a little masculinised, with an androgynous face, short hair and a male-sounding name (Joan). She’s a woman riddled with contrasts: she’s extremely intelligent, well-spoken, beautiful and elegant, and yet she’s more than happy to stand in the background, in the shadow of her famous husband.

Joan Castleman (Close) has spent the past 40 decades of her life entirely devoted to her husband Joe Castleman (Jonathan Pryce, who looks increasingly like Jeremy Corbyn with longer eyebrows). Not in the kitchen or raising children. Well, she has probably done her share of the more traditional and old-fashioned wife duties, too. But what keeps Joan and Joe together is a far more profound complicity. Joe is a famous writer, but he’s only successful due to his wife, who does the work for him. Joan is Joe’s ghost writer. Her name is never credited anywhere. Yet Joe wouldn’t even know where to start without her. 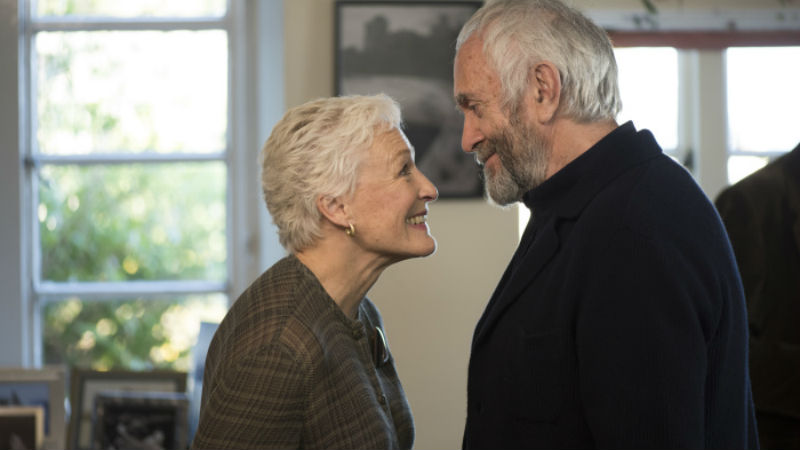 Nathaniel Bone (Christian Slater), an ambitious journalist with a very sharp eye, notices that Joe’s writing was remarkably inferior four decades earlier, immediately before he met Joan. He suspects that Joan is the real author of Joe’s extensive portfolio. He approaches Joe and Joan, but they both deny his theory. He continues his investigations undaunted, and becomes involved in the lives of the Castlemans in more ways than the couple anticipated.

I can’t help but seeing this movie as a celebration of all women who live in the shadow of their husbands, and who are more than delighted to stay there. They do not wish to budge. Despite the fact that the screenwriter and the author of the eponymous book on which the film is based are both females (Jane Anderson and Meg Wolitzer, respectively), I feel that The Wife does women a huge disservice. Joan is a more sophisticated version of Dorothy Mitchum. Or Tammy Wynette. Joan is very proud of Joe, even though he’s hard to understand.

To add insult to injury, Joe is unfaithful. And Joan is fully aware of his dalliances. No one seems to understand why such a talented woman opts to give up the recognition she deserves in favour of a very undeserving husband. One day, Joe learns that he is about to receive a Nobel Prize in Literature. Joan is more than happy travel to Stockholm with her husband for the ceremony. During the ceremony she opts to stay remain the shadow. She does not even want to be thanked for her support. Of course, this is her prerogative. As it was Dorothy Mitchum’s and Tammy Wynette’s to stay at home baking cookies. A woman must be respected whatever her choice. It’s just very awkward that a woman would give up her entitlement and privileges for no apparent reason. Not impossible. Just awkward. 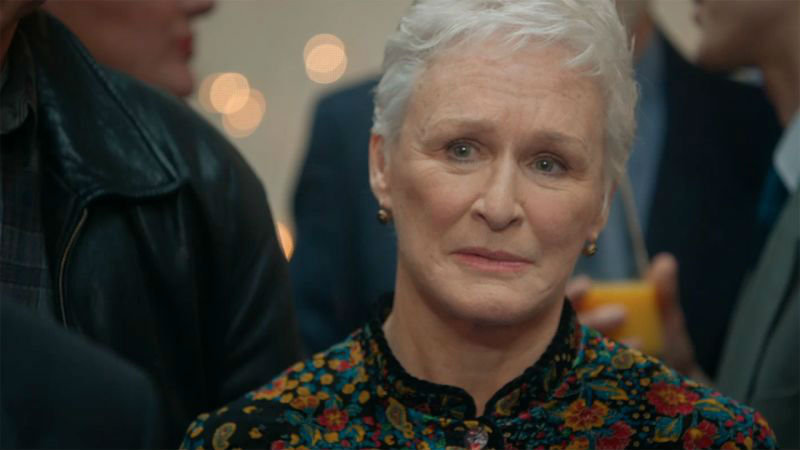 Ultimately, The Wife doesn’t feel entirely credible because Joan’s motives are so extremely fuzzy. Not that ghost writing for a spouse is not conceivable. It’s now widely known that Alma Hitchcock did it for her husband Alfred, often described as the greatest filmmaker of all times. It’s just that Joan’s personality doesn’t seem to fit in with her attitude.

There are other problems with The Wife. The script is banal. It lacks gumption and flare. It’s a pretentious and mediocre study of nature of creative writing. Ironically, there is hardly anything creative about it.

The final denouement is very problematic for women. A saccharine and mostly predictable ending, with a subliminal message I found difficult to digest. If I was a female, I would never want to find redemption in the way Joan did. It’s almost like self-sabotage. Of course, I am not a female. So it’s perfectly conceivable that I simply lack the sensibility to understand The Wife. One way or the other, I would not stand by your man!

Still, The Wife is guaranteed to please a lot of people of both sexes. Europhile Americans will love the images of snowy Stockholm combined with the pomp and circumstance of the Nobel ceremony. There’s even an impromptu Saint Lucia intervention at breakfast, and a touch of royalty. Who doesn’t love a Scandinavian monarch, particularly one that sits downs and interacts with you on your dinner table? In a nutshell, a formulaic endeavour tailored to mainstream audiences and the Oscars.

The Wife is out in cinemas across the UK on Friday, September 28th. On VoD on Friday, February 8th.

Just like a fisherman using a bait in order to catch their prey, Oscar-baiting can also have fatal consequences; Richard Greenhill looks at five films that fell victim to this cruel yet vital practice! [Read More...]