"Filthy genius movie"
The Jew who humanised the Nazis: compelling documentary rescues the legacy of Jewish-German philosopher Hannah Arendt while shedding a new light on ever-so-urgent problems such as Palestine and the refugee crisis - now available on VoD

Hannah Arendt’s work remains as urgent today as it did more than 40 years ago, when the controversial Jewish-German philosopher died in her post-war home in New York. Much of the Jewish establishment on both sides of the Atlantic has consistently dismissed Arendt’s opinions for her alleged leniency of the crimes committed by the Nazis on her own people, and for her apparent forgiveness of the Holocaust.

Arendt’s coined the well-known phrase “the banality of evil”, which may sound like the trivialisation or even compassion for those who carried out the massive genocide of six million Jews in the extermination and concentration camps during World War II. But this is a gross misconception. In reality, Arendt’s work has nothing to do with mercy and amnesty.

Instead, the philosopher investigated the delusional naivety of people subjected to a totalitarian regime. They buy the flawed ideas of grandiosity guided by the belief that they are doing the world a favour. They possess an unwavering faith in a fictitious world, not just lust for power. And they shut down their humanity by denying the dignity of the individual in favour of the regime. Arendt therefore described the Nazis as “decent” and “law-abiding citizens”. She characterised Adolf Eichmann – one of the leading organisers of the Holocaust – as “a clown” and “sometimes dumb” during his widely-publicised trial in Israel in 1961.

Arendt is so powerful and controversial because she has confronted the entire world – in particular the Jewish establishment – with their humanity and therefore their complicity for the atrocities of the War. When a German person apologised for the crimes carried out by the Nazis to the phisolopher, she replied: “You are embarrassed of being German. I am embarrassed of being human.”

Interviews with Hannah Arendt are combined with testimonials from modern-day personalities – such as American gender theorist Judith Butler – and real footage from the War, enveloped by readings of Arendt’s private correspondence in voice-over (particularly the letters written to the philosopher Karl Jaspers). 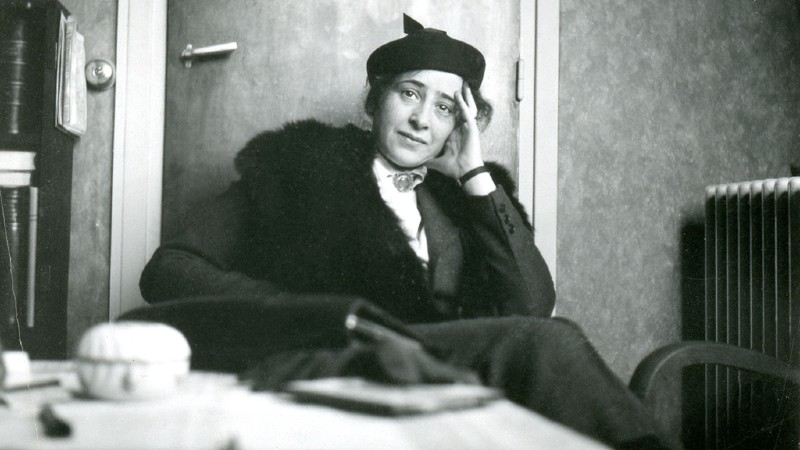 Vita Activa: The Spirit of Hannah Arendt succeeds at highlighting the indelible urgency of the philosopher’s radical and independent thinking, while keeping a critical distance from its subject. Many Jews believed that Arendt was irresponsible and frivolous in her actions and claim. For example, Arendt inconveniently reminded people that the Jewish Councils were responsible for the death of millions of Jews, while she never vehemently criticised her fellow philosopher Martin Heidigger for his collaboration with the Nazis.

A very relaxed and confident Arendt appears throughout the movie. She is certainly not avuncular, but she is still very human and captivating. Her laughter is candid and powerful, and there is not doubt that she is capable of loving and expressing affection, and she also is champion of cultural plurality. She is neither smug not tedious. She is the kind of person who could engage in a passionate and exciting conversation with anyone in a dinner table. She is very likable.

Arendt’s humanity claims are not a lame excuse to perpetrate crime. Quite the opposite, it is this awareness that can prevent us from perpetuating the same mistakes. In other words, humans must reflect about their fallibility and malleability in order to improve themselves. Or as Arendt puts it: “it is dangerous to think, but it is far more dangerous not to think”.

Some topics of the film are very current. Arendt described the World War I refugees as “superfluous, stateless and rightless living corpses”. She believes the concentration and extermination camps of World War II were an inevitable consequence of this (presumably the need to kill the living corpses). DMovies hopes that this is not prescient, and that the Syrian refugees will not encounter the same fate.

Arendt was a vocal Zionist in the 1930s, the movie reveals, but she became a fierce critic of the Israeli state as soon as it was created. She argued that Israel’s chauvinistic attitude towards its neighbours turned their potential best friends into enemies. She went as far as saying that this division between Jews and other people does not differ from other master race theories. Judith Butler explains: “she believed that the Israelis should have accepted the Palestines, in the same way the Germans should have accepted the Jews”.

Despite more than two hours of duration and the complex philosophical content, Vita Activa: The Spirit of Hannah Arendt is an effective and digestible film. It is riveting and comprehensible even for those who never heard of Arendt before.

Vita Activa: The Spirit of Hannah Arendt is available to watch on Vimeo.