"Filthy genius movie"
Lest we forget British borstals: in a brutal and oppressive environment where violence is the only currency, happiness and knowledge are a very subversive weapon - on BritBox on Thursday, June 2nd

Scum is a British drama film portraying the brutality of life inside a British borstal (the now extinct juvenile delinquent institutions). The film was originally made for the BBC in 1979, but was never broadcast due to the graphic violence depicted. The director made a watered-down version of the film in 1983, when it was finally exhibited on Channel 4.

Morality activist Mary Whitehouse campaigned vigorously against the release of Scum, even prosecuting Channel 4 in a High Court. She eventually lost the battle. The film was first released on VHS in the UK in 1983, and it was immediately caught up in the UK video nasty controversy (a moral crusade against graphic content on VHS). Despite the changes to the original film, Clarke’s masterpiece remains one of the most shocking and controversial British films in history due to its realistic depiction of racism, extreme violence, rape, suicide, verbal and psychological abuse.

In the film, Carlin (Ray Winstone) is a new inmate in a British borstal, in an undisclosed location. The violent and assertive young man quickly befriends Archer (Mick Ford), an eloquent intellectual who uses his knowledge in order to challenge the borstal staff and their superiors. Banks (John Blundell), the current “Daddy” (the inmate who “runs” the Borstal) is seeking Carlin for a fight in order to reassert his superiority. In the original film Carlin was a homosexual, and his own internalised homophobia a likely trigger for his violent demeanour – but this was removed from the 1983 version.

Very few films have dealt with institutionalised violence in a confined system as candidly as Scum. Stacey Dooley has recently denounced prison boot camps in the US in her BBC documentaries, while Peter Mullan exposed abuse in the Magdalene Laundries in The Magdalene Sisters (2002), but neither has provided a portrait as bloodied, twisted and disturbing of a rehabilitation institution as Scum has. 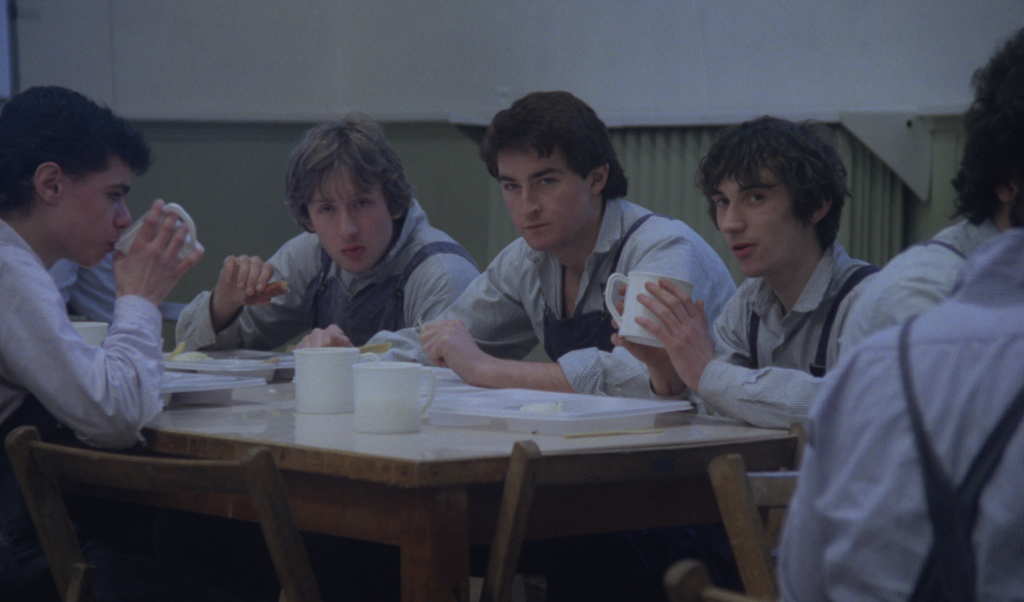 Violence is the only real currency in Scum, and it is only to be used be the officials. Violent inmates are a subversion of the establishment and therefore must be punished, which is the case with Carlin. Knowledge and intellectual rhetoric are not acceptable as capital, and so Archer is consistently punished for exposing his ideas. He mentions Dostoevsky’s classics ‘Crime and Punishment’ and ‘The Idiot’, and he reflects on the value of the truth and other philosophical concepts to no avail. Archer is inherently content in his non-intelligible intellectualism.

Carlin, Archer and Banks are family names, and the youths are often identified by a four-digit number. The Home Office mandated that they are never addressed by their given name. These young men live in a prison and have to work in conditions analogue to slavery. They have been stripped of all individuality and dignity, and left to function as automaton in a society which chose to turn a blind eye to their plight.

Breaking the news of the death of someone’s relative is probably one of the most difficult and challenging communications tasks anyone could ever encounter. But not in Scum. Inmate Toyne (Herbert Norville) finds out that his wife Penny has died from a member of staff in the most casual and careless way. Life in the borstals is so brutal and callous, that it simply does not allow time and space for mourning.

Alan Clarke’s film exposes the hypocrisy and contradictions of a failed prison system that did not habilitate its prisoners. Instead, it turned them into insensitive and hardened criminals. Borstals may sound like a far-removed reality because they were permanently shut down in 1982. However, there are many modern-day prison facilities where prisoners are left in a legal limbo, and are vulnerable to systematic abuse – such as the immigration removal centres and war prisons. And suicide in British prisons is still rife, at 82 last year alone. Sometimes horror is not as distant as it seems.

Scum is out on BritBox on Thursday, July 2nd.