"Filthy genius movie"
The pinnacle of François Ozon's talent: the highly prolific French filmmaker travels back in time to the Weimar Republic in order to solve a death mystery, and excels in his elegant and elaborate style.

François Ozon doesn’t need any further proof of his talent; just look at his filmography. He directed cult classics such us 8 Women (2002), Swimming Pool (2003) and Potiche (2010). The 2002 film included a constellation of movie stars: Catherine Deneuve, Isabelle Huppert, Fanny Ardant, Emmanuele Beart and Ludvigne Sagniera. He also directed Gerard Depardieu, Charlotte Rampling and Kristin Scott Thomas. At the beginning of his career he was known as France’s gay enfant terrible. At the age of just 48, and with almost 40 films under his belt, he is considered one of the greatest directors in the world, and he also writes most of his films. His latest film Frantz may well be the pinnacle of his extensive career, and this masterpiece could deservedly bestow the accolade of “cinema genius” on the relatively young director.

Frantz is not a straightforward drama, and its narrative is charmingly compled. It’s a film about antagonistic emotions. It’s a film about absence and presence. It’s black and white and yet colourful. It’s revealing and closeted. Ozon unveils the story of Frantz, and then the story of Anna (Paula Beer) and Adrien (Pierre Niney) unravel. The film is perhaps the epitome of neoclassic perfection. Classic in its pre-technicolor cinema qualities aesthetics; classic in the choice of the actors and their very specific looks seen in classic films; classic in his use of the ‘unconventional love story’. Ozon literally travels in time and rescues the formula of the old movies, bringing back to life a small German town just after World War I. 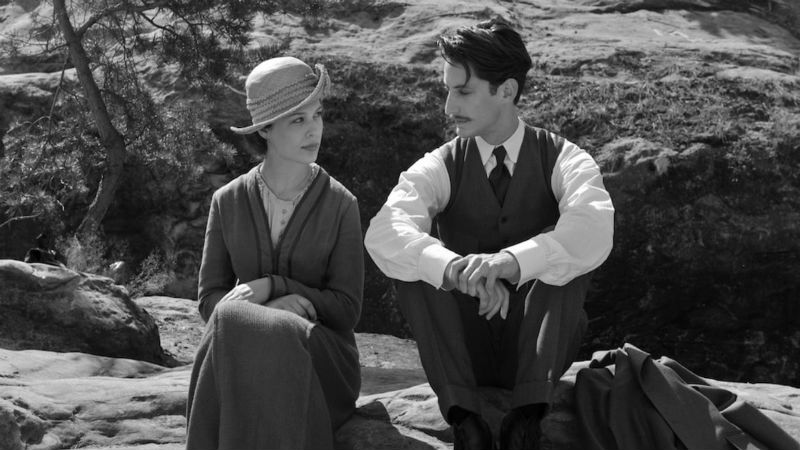 It’s 1919 in the town of Quedlinburg, in the German state of Saxony-Anhalt (not far from Berlin). Anna is healing from the death in combat of her fiancé Frantz. During her mourning she befriends a Frenchmen, Adrien, who frequently visits Frantz’s grave. She introduces him to Frantz’s father and mother (Ernst Stotzner and Marie Gruber, both spectacular in their roles). At the beginning there is tension in the air: Adrien is French, while Frantz’s family is German. Opposite sides, enemies during the recently finished World War I. From there we follow the close relationship that develops between Anna and Adrien over the memories, letters and feelings that both sides devote to the late Frantz.

Ozon finds a curious way to tell the story of a character, who names the film but hardly appears in the film except for a few memory flashbacks. The unusual narrative, script and creative choices make Frantz a film above the average. The director found the right balance, vouching for the excellence, splendour and eternal life of his movie. Frantz is relevant and magnificent, just like a Manet painting that appears in the film playing an important part in solving the enigma of Frantz’ death.

Frantz is delightful to watch and full of twists. Nothing else can be said about the film without spoiling it; the resolution of a puzzle, the revelation of a truth. To top it all up, you will probably fall for the epic beauty and talent of Paula Beer.

The film showed at the 73rd Venice Film Festival, when this piece was originally written. It’s out in UK cinemas on Friday, May 12th (2017). On Mubi in September 2020.