Anthony and Claire Bueno’s Cleanin’ Up the Town: Remembering Ghostbusters, is a retrospective deep-dive into the making of this 80s classic. It features never before seen archival material, and while Bill Murray’s absence is noticeable, although likely expected, director Ivan Reitman, co-writers and stars Harold Ramis and Dan Ackroyd, along with cast members including: Ernie Hudson (Winston Zeddemore), Sigourney Weaver (Dana Barrett), Annie Potts (Janine Melnitz) and William Atherton (Walter Peck), as well as an extensive number of the crew, all reminisce on their experiences.

More than a deep-dive, Cleanin’ Up the Town is a piece-by-piece jigsaw puzzle of the story behind the film, as the filmmaker siblings uncover the painstaking work that went into bringing this classic comedy-horror to the screen. It’s the authoritative making-of, that does for Ghostbusters what Full Tilt Boogie (Kelly, 1997) did for From Dusk Till Dawn (Rodriguez, 1996), and Hearts of Darkness: A Filmmaker’s Apocalypse (Bahr, Hickenlooper, Coppola, 1991) did for Apocalypse Now (Coppola, 1979). The documentary renders the making-of Ghostbusters a moot point, this piece-by-piece jigsaw puzzle complimented by the Blu-Ray extras is a comprehensive account.

Capturing the spirit of its subject, just as Full Tilt Boogie and Hearts of Darkness shared a kindred spirit with their respective films. It’s fitting that outsiders, and not a crew leading an industry production were the ones to tell this story because as Anthony Bueno observes, “At the beginning of the documentary Mike Smith says that you’d be surprised to find out Steven Spielberg had nothing to do with it, and that’s the thing with Ghostbusters – it wasn’t made by the big players back then; it was made by Ivan Reitman. …This was his first big film.”

These documentaries are not exposés that ruin the magic, but add to the allure a film commands, although the outlier in my opinion is the enthralling Full Tilt Boogie, which From Dusk Till Dawn pales in comparison to. Cleanin’ Up the Town will face the expectations of the audience to not ride the success of Ghostbusters, but add to its lore, and create a deeper cultural understanding. Early in the film any questions of the films integrity are silenced, when Dan Ackroyd reminisces on his family’s connection to the story, that conveys a depth of detail and with it a sincerity. 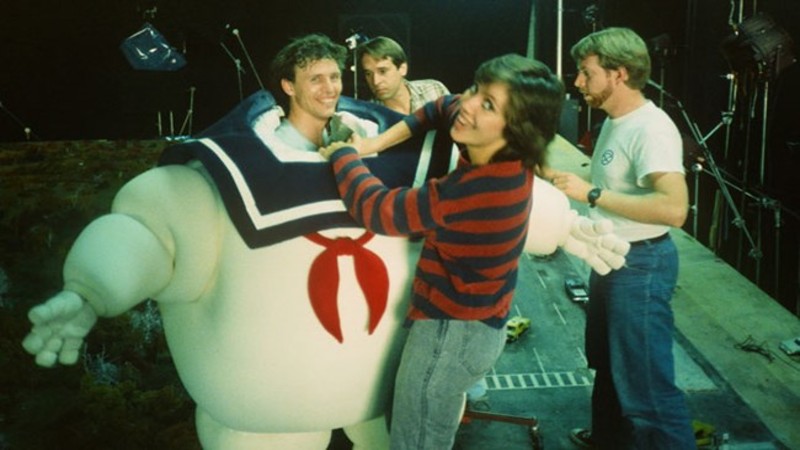 The materials they have access to are rich are the way they’re used give the film an authoritative presence. From the call sheets with information circled, date stamped, to stills and cutting to clips, this is a jigsaw puzzle layered with artistic touches. But it’s also the way the edit or cut is appreciated – the intercutting of separate interviews to create a cross-cutting dialogue infuses the informative narrative with energy. Anthony Bueno, who edited Paul Davis’ documentary Beware the Moon: Remembering An American Werewolf in London (2009), and his co-editor Derek Osborn use the edit to synthesise the sources of information, to tell a visually interesting and well crafted narrative that will hold the audience’s attention.

Cleanin’ Up the Town reveals the collaboration that goes into the filmmaking process, painting a detailed picture of how Reitman, Ackroyd and Ramis’ vision grew into one shared by many. While it’s an exaggeration to say that it shows the warts and all, there are moments in which frustrations are expressed: Bill Murray irritating Annie Potts with his tardiness and attitude, and the crews amused response to her retort, and Hudson’s recollection of his role shrinking. But the most shocking reveal is the studios omission of around 100 of the effects crew from the credits, that led to an ad being taken out in Variety to acknowledge the work of all those artists. What was a mostly amicable production, these moments reveal the commitment to the project and one another, that paints a picture of a loving family who like any have their moments.

Essential viewing for Ghostbusters fan, the strength of the film is that it reminds us how we still view these seminal films from our youth through a nostalgic gaze. For an entire generation, Cleanin’ Up the Town transports us back in time, but more importantly, this is a necessary piece of documentary filmmaking that records how films of the era were made and how film production evolved.

Cleanin’ Up the Town: Remembering Ghostbusters is available on Digital and Blu-ray from Monday, June 22nd.