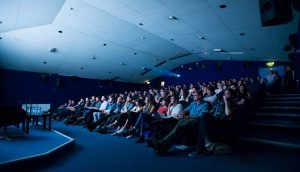 Discover incredible international shorts in the Oscar and BAFTA-qualifying competition programmes, take part in talks, workshops and masterclasses from top industry professionals, and mix with the major filmmakers of tomorrow at the festival parties.

The evening programme includes treats for fans of Sci-Fi, Horror and Comedy whilst the notorious Late Lounge returns to shock and delight. Vote for your favourite film and have your say on what will win the Audience Award.

The Awards Party will take place this year at Colston Hall where audiences and filmmakers alike will find out who the juries have selected to win the top prizes, and which films will go on to compete for the Oscars, BAFTAs and European Film Awards. With a live performance of DJ Yoda’s ‘Tarantino AV Spectacular’, don’t forget to bring your dancing shoes!

To celebrate the 25th edition, Encounters Film Festival are throwing it back to their roots with a 90s-inspired programme strand, including a thrilling outdoor screening of David Lynch’s Fire Walk with Me at Boiling Wells woodland amphitheatre where the owls are not what they seem, presented by Compass Presents.

So for all fans of film; be them short, feature, animated, comical, contemporary or spooky, there’s sure to be something in the programme for you.

Take a look at the full programme on the Encounters Film Festival website.

Industry activity this year at Encounters Film Festival will include insightful panel discussions, open forums for chatting all things film, masterclasses to inspire and much more.

Here’s a breakdown of what to expect over the festival week:

Kotatsu Animation – Award-winning director and stop-motion animator Takeshi Yashiro will be joined by his producer Satoshi Akutsu to give the European Premiere of their latest work “Gon, The Little Fox”, an adaptation of the classic 1932 children’s story about the fateful encounter between a farmer and a mischievous fox, told in delicate detail through beautifully crafted stop motion dolls and intricately designed sets.