"Dirty gem"
Dirty gem of a documentary takes us on a voyage through the life of the video camera, one that offers a breadth of intrigue and unparalleled insight - from Sundance

Filmmaking, the video camera, the moving image: from humble beginnings with the work of adventurous inventors – those early students of light manipulation – and into the epic blockbusters of today in their majestic glory. The journey of the video camera has been long and torturous at times.

Filmmakers Axel Danielson and Maximilien Van Aertryck (with the latter also acting as the film’s narrator) have tried to create a thought-provoking collage of exciting clips that circumnavigate humanity’s infatuation with the video camera, and framing in particular. What starts as an introduction to some viral clips of old, ranging from popular fads and infamous Trump rallies, before swiftly manoeuvring into a small history of video and photography. Beginning in the early 19th century with Joseph Niépce and his ground-breaking photography, before the adventure eventually landed at the feet of every film school’s favourite set of brothers: Auguste and Louis Lumière with their renowned Train Pulling into a Station (1895).

The variety of footage collected is incredibly varied, with clips of world leaders protruding around like action stars (Kim Jong-un becomes John Wayne right before your eyes) leading the way. That’s just the beginning of this eclectic assembly though, as the film commences its expedition into this idea of perspective – which is the primary theme being thrust upon us. The image of the lifeless Haitian girl (a photograph that leaves an uneasy feeling in one’s head); the effects of the global disaster from one angle, and from another… several starving vulture-like photographers gathered around eyeing up a fresh carcass. One image protects the illusion that the modern world abides by, whereas the other offers a stark realisation of the true darkness of reality.

Fantastic Machine showcases all the mediums that the video camera has operated in since its induction, from advertisements, weather reports, war propaganda projects (with the footage of an ISIS member forgetting his lines being a massively surreal moment), game shows, news reports, viral phenomenon’s, more commercials – the list is endless and the new age of social zombies had succumbed to the rapidly increasing power of the television and its hypnotic glow.

The directors themselves sprinkle some of their own captured footage over the top of proceedings: a school photo day with a selection of non-smiling students; an obscured camera experiment in the middle of a packed mall; two girls desperately trying to obtain the best selfie photos for their socials – they are uninterrupted and incredibly humanistic, and if it wasn’t for Covid interrupting the production plans, the film would have been littered with more of these humane moments – the film’s greatest moments. 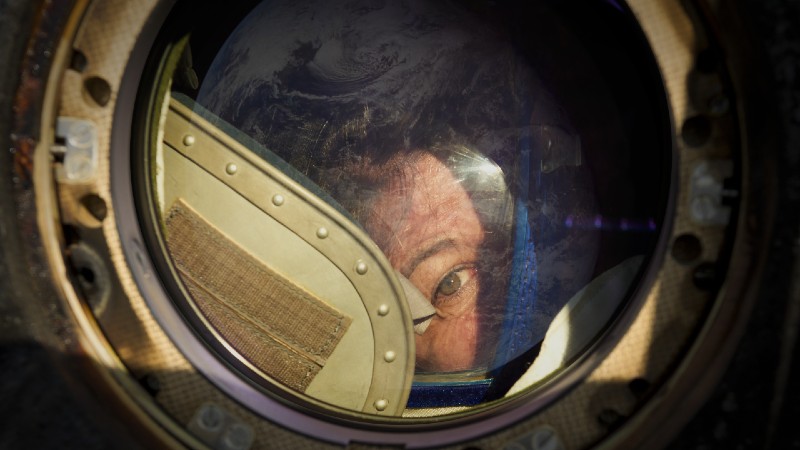 These clips aren’t alone in trying to evoke such diverse emotion though, as it often projects great sadness and a fair bit of annoyance upon us – the mindsets of certain people who are willing to risk their lives for a few likes on Instagram is idiotic and oh so worrying. The quest for the “perfect picture” is being made out to be bigger and more important than the pursuit of survival. And what about those seemingly candid photos and videos; you know the ones, featuring people whom you see pretending to look away while stopping traffic and being perfectly lit by staged LED lights – this is the façade that society has adopted. Is this what the Lumière brothers envisioned for the evolution of filmmaking? Whatever the case, Danielson and Van Aertryck do a brilliant job of highlighting the issues, and only a little bit of irony.

The themes that intend to be the focus – that are scattered lightly onto parts of the film – are far too brief though. The longer Fantastic Machine continues, it ends up falling into the trap of just becoming a film structured by a random selection of clips in no particular order – it’s almost a direct interpretation of YouTube’s algorithm in film form, something that the directors claimed to help and hinder the selection process. At times, it’s politically savvy, before being followed by moments of humour and sadness (and that’s without the reminder of Musafa’s untimely death by one distraught kid), but without any real structure to it, the film becomes just your average video collage.

A process that you might think to be a fairly simple idea – simply sticking a selection of videos next to each other – is an incredibly arduous task and one that is difficult to get a tune out of. To even create some kind of structure is painstaking, and the directors certainly did a lot of things effectively. They succeeded in showcasing what the video camera can achieve, from the simple to the extravagant to the pointless (and there’s an awful lot of the latter being highlighted) – it’s all art, it’s all content at the end of the day though, and that’s exactly what this fantastic machine was made for.

Fantastic Machine has just premiered at the Sundance Film Festival.