"Dirty gem"
Closeted Lesbian PE teacher wrestles with Section 28, in this realistic drama set in the year the homophobic legislation was introduced - impressive debut is in cinemas Friday, February 10th

The debut feature by British director Georgia Oakley, Blue Jean is a stark reminder to any LGBTQIA+ individual of the not-so-distant troubled past, when the introduction of a sadistic and cruel policy stunted the progress of LGBTQIA+ rights in the UK for over a decade. Section 28 was introduced by then conservative Prime Minister Margaret Thatcher in 1988, the year the film is set. The policy was created in order to eradicate the “promotion” of homosexuality, predominantly in the education system. Even if the policy was abolished in 2003, the remnants of it still linger to this day, with a number of LGBTQI+ teachers, particularly within minority groups, still fear coming out to their pupils.

In Blue Jean we see the effects of the policy played out in everyday life, on the personal level, in both teachers and pupils. Jean (played skilfully by Rosy McEwen, best known for her role in TV show The Alienist) is a closeted PE teacher, divorced and now in a relationship with the anarchic Viv (Kerrie Hayes). To colleagues and family, she comes across as reserved, indifferent, often unresponsive, even in the face of piercing homophobic micro-aggressions. And at the same time in her personal life, she is unable to fully commit to being an out and proud lesbian. She anxiously holds the disparate sections of her life firmly apart, that is until the presence of a new young pupil, Lois (Lucy Halliday) threatens to blow her cover when she bumps into her at the local dyke bar.

It’s a subtle and uncommonly stylish depiction of the ’80s as Oakley opts for a dim ambience and a palette of pale, stonewashed colours to convey an ordinary if slightly depraved post miner’s strike realism. The are some of the flashy trad signifiers of the era, specifically assigned to Jean’s sister and her bourgeois suburban home; their privileged life is contrasted by the dreary north-eastern urban landscape. Yet tucked away there are collective pockets which host a thriving lesbian subculture brimming with positivity and activism, functioning on the outskirts in squat houses and dingy bars. 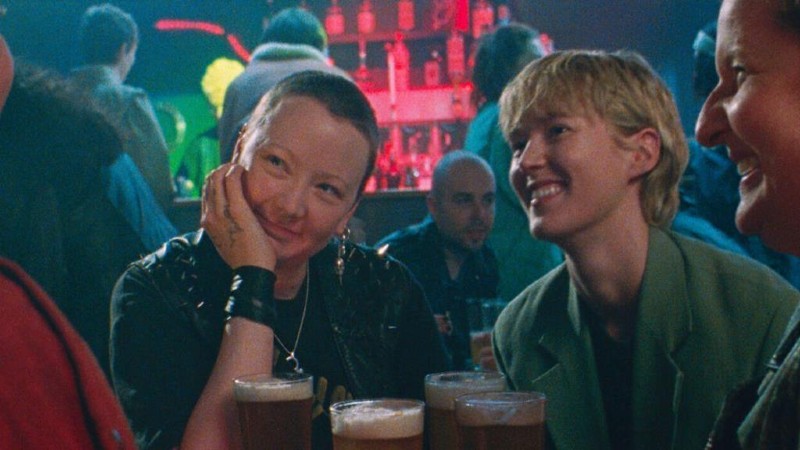 Occasionally a TV news broadcast interrupts to remind us of the harsh reality, whipping up hysteria around the looming threat of the gays, including footage of Thatcher’s spewing her infamous venomous words “Children who need to be taught to respect traditional moral values are being taught that they have an inalienable right to be gay”. If you were gay, it would be hard not to feel the world is against you. The numerous, repetitive scenes between Jean and Viv, feature verbal tug-of-war symbolising the conflict in Jean’s head. Viv’s words are the antidote to each of Jean’s repressive thoughts.

McEwen is remarkable as the ambushed Jean. There is a certain simmering stillness to McEwen; masterfully portraying an exterior that is barely able to conceal the angst and fear lurking beneath. As she tries to be unobtrusive and blend in, relegating herself from being any sort of role model or being in any way political, she is simultaneously being shunned by her own cohort for not being those things. Remaining in closet signals to an unhappy unsatisfied life, whilst coming out means opening herself up to ostracization, bullying and potentially losing her career.

As matters intensify and wrong choices are made, events come to a head surprisingly quite late in the film, with Oakley cleverly refusing to wrap things up tidily as Jean tries to make amends. There is a rather twee moment of Jean declaring her lesbianism to an unexpected, if annoying, male figure at a family gathering, which is further proceeded by a moment of hysterical laughing in liberated relief. Perhaps unnecessary as it’s in the introverted moments when Jean is at home on her own, pottering about the house, dying her hair, smoking cigarettes whilst staring into the abyss that are most favourable and communicate much more than any show of on-the-nose exposition.

It’s nonetheless an impressive debut with nothing able to deter from McEwen’s impressively refined depiction of Jean. Jean embodies fully the intrinsic difficulties that LGBTQI+ had and possibly still have living in any society that deems their existence wrong. Life decisions are sometimes unavoidably a product of one’s surroundings and not solely from one’s own volition, with a personal cost to every outcome. As much progress has been made, it’s crucial to remember people like Jean and the cross she bear-ed, in doing so paved the way for future generations.

The "most hated man in Britain" is never afraid to be the first on the frontline in struggle for LGBT+ justice and equality - explosive doc is on Netflix [Read More...]

The history of LGBTQ+ Britain in the past 50 years is the central pillar of this sobering doc, which both celebrates and raises questions about the achievements of the community - now available on VoD [Read More...]

Wrapping up Pride Month with the dirtiest LGBT films

As gay as it gets: in order to wrap up the Pride Month we have asked our dirty boys and girls to pick their favourite LGBT film of all times, and to describe how it affected their lives. [Read More...]