Glass Onion: A Knives Out Mystery

"Mostly clean movie"
Daniel Craig reprises his role as Benoit Blanc in this plodding sequel to Knives Out. Beatles fans should give this film a miss, but then so should everyone else - on Netflix on Friday, December 23rd

In the opening moments, between garbled media interviews and questionable racial epithets, viewers are given a shot of Daniel Craig engaging in a Zoom conversation from the comforts of his bath. But anyone hankering for the hunk who bedded Sienna Miller in Layer Cake (Matthew Vaughn, 2004) will be disappointed, as this is a character keener to flex his American tones than to embrace the tone of his body. It’s panto, and not a very good one, but apparently this is the standard Netflix expects of a Christmas-esque mystery drama.

Craig plays Benoit Blanc, the wannabe sleuth who gets invited to partake in a murder mystery event, headed by nefarious billionaire Miles Bron (Bron is a worthy foe, but save for the lack of South African accent, he might as well be Elon Musk). Bron is surprised by Blanc’s presence, but indulges him sufficiently to inform Blanc that the weekend is being powered by a “glass onion”, a hydrogen-based alternative fuel he intends to launch to the public. The film isn’t interested in exploring its connection to the titular Beatles song in too much detail, although director Rian Johnson papers over these plot holes through a series of giddy setpieces that are more attractive to watch than they are to write about.

The synopsis serves as a damning reminder how lazy mainstream audiences have become, because Johnson has released a work with none of the intelligence or foresight of The Last Jedi (Johnson, 2017) , but rather pieces together a spectacle about a sleuth – with a penchant for glib quips and self-depreciating irony – has been reconfigured to literally spell out the journey for the audience. 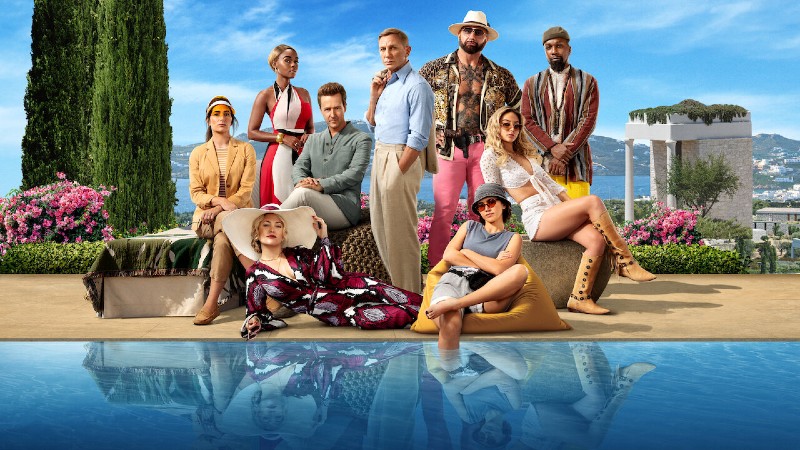 Hell, the supporting cast is much less sparkly than it had been in Knives Out (Johnson, 2019), Glass Onion‘s predecessor that proved Craig could steer a lucrative franchise after Bond. No Chris Evans, no gloriously wicked Jamie Lee Curtis, no actor as brooding as Christopher Plummer adding gravitas to the proceedings, just a hodgepodge of extras who bring little to the scenery barring a pretty smile or two. Where the film proves to be innovative is in the detective’s sexuality: Blanc is unabashedly queer, and enjoys a romance with Philip, played with dashing good humour and bonhomie by 1990s’ sweetheart Hugh Grant. Predictably, the film swiftly abandons this curveball, because there’s a “mystery weekend” to engage in.

The film has some merit: there are clever throwbacks to the Covid-19 pandemic that has thankfully been relegated to the history books (touch wood!), and we have a megalomaniacal Edward Norton, thrusting himself forward as the billionaire lothario he desperately wants the world to see him as (how, though, is this performance different from his snotty portrait of an actor embracing the plaudits being thrown his way in the marvellous Birdman?) In between these setpieces stands Craig who really is quite dull to watch.

Where his James Bond was layered with bravura, neurosis and unbalance, Blanc is bland, boring and, well, blank. Push him into a swimming pool, and you’ll find him plodding up and down like a baby swan looking to grow up and bloom. He looks embarrassed producing that dreadful American accent – “Well, now,” he utters, when he’s promised a weekend of frolics and fun – and feels determined to demonstrate that he’s every bit the comedian his Bond stalwarts Roger Moore and Timothy Dalton were in their post Bond trajectory. But he’s blank, Benoit blank, in a bland drama Netflix feels sits as Saturday night entertainment. Hold on to your hats, folks – the future is going to be grim!

Glass Onion: A Knives Out Mystery is on Netflix on Friday, November 23rd.