Dreaming Walls: Inside the Chelsea Hotel

"Greasy movie"
Embark on a tour of the iconic Manhattan building decades after it first became a breeding ground for avant-garde artists - in cinemas and on VoD on Friday, January 20th

One long-standing resident of the famed establishment explains: “I think the Chelsea is the product of New York City and the culture”. There’s been many a famous name that has walked down the halls of this grand building. The film title refers to the stories that these walls could tell us if they could talk, as the faces of the past illuminate the corridors brightly. But it’s not these showbiz names that the film intended to focus on, it’s the rent payers still living there now; people who have become part of the furniture and have witnessed the transformation that this famed hotel has undergone.

The legendary Chelsea Hotel is an icon of 1960s’ bohemianism, opening its doors over the years to a collection of free-spirited artistes such as Allen Ginsburg, Jim Morrison, and Janis Joplin: a haven for the creation of great art and nonconformist viewpoints. The film showcases this almost derelict hotel in the middle of a makeover, where it will be turned into a luxury hotel. We join the adventure during the eight year of construction as the building is held together by scaffolding, duct tape, and the tales of old. 51 residents still live in this building – that’s for now at least – but face constant pressure to move on from the place they call home; some have already left, others stay strong in their rooms, as the capitalist walls encroach on their quaint little lives.

The Dreaming Walls directing team of Amélie van Elmbt and Maya Duverdie – while also being assisted by the producing skills of Martin Scorsese himself – clearly set themselves the task of capturing the magic of this grand old building by using the famous names of old and interlinking them with last remain posse of people. But the celebrity characters that were promised from the beginning are seen very fleetingly; a lack of archive footage and old interviews of the famed, force us to focus on the remaining bunch, who, for the most, are largely uninteresting. If it weren’t for the two golden women who anchor this film down – the larger-than-life Merle Lister, a former dancer with that spring still very much in her step, and Bettina Grossman, the oldest resident still at the hotel who was unfortunately used briefly towards the end – then this film might have collapsed under the rubble. 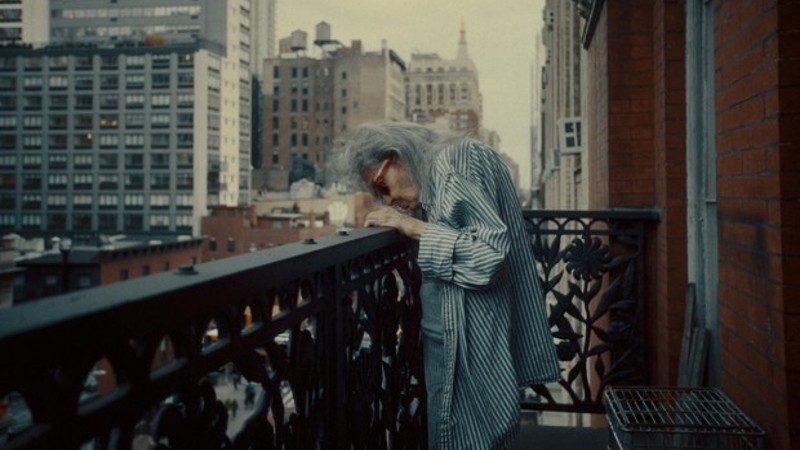 It is constructed using various concepts of documentary filmmaking. Poetic messages explore the story, while we observe the characters like a fly on the wall at times, allfinished off with a n expository narrative directing viewers across the creaking floors. It’s an awful lot to take on for a film so short (little over an hour in length) and it does seem to become bogged down by the need to intertwine all of these techniques in way that’s fluid, instead of focusing more on one or another. But the exploration is the film’s greatest ally, with the camera floating like a spirit in a soft breeze, and the whispers of the famous following in its wake. If you can imagine what these echoes are telling us about the hotel’s history, that is when you get the full magic of the film, which is something it excels at.

The biggest pitfall is that the characters aren’t always given enough time to flower. The subject is a really unique idea, but we need to understand these people just a little bit more so that everything can work as one in creative harmony. The story does, however, include some very interesting moments. We learn about the building, the variety of people that did visited, and the different eras – the latter being epitomised by the adorable interaction between Merle and a younger construction worker who recounts his experience with the spirit world (plenty of people have died in this hotel by the way), before the two end their exchange ends with a lovely little dance.

Dreaming Walls is in cinemas and VoD on Friday, January 20th:

Dreaming Walls: Inside the Chelsea Hotel

Embark on a tour of the iconic Manhattan building decades after it first became a breeding ground for avant-garde artists - in cinemas and on VoD on Friday, January 20th [Read More...]

One building, one million stories

Our writer Maysa Monção unexpectedly stumbled across the iconic Chelsea Hotel while in New York covering the Tribeca Film Festival, and she finds out that every corner of the building exudes film history [Read More...]