"Dirty gem"
In this piercing, polished documentary, a married couple discuss their views and fears to a camera that spies on their each and every movement - in cinemas and also on Curzon Home Cinema on Friday, February 10th.

A promising British author’s career is being tested when her husband is tasked with playing the emotional spouse that has nominally been played by a woman. Devorah Baum balances her burgeoning success with a tricky family life, a scenario that’s made even dicier due to a prying camera that records every move. Yet this is a worthwhile experiment, because it documents the fragility of the male spirit, demonstrating an avenue that her husband – and every husband – could follow.

If you’ve been slacking in gender studies, you’ll have to make up your own opinion on the album, because the film doesn’t necessarily offer a suitable idea, but aims to create a dialogue men and women can engage in critically. What the film offers is a portrait of a marriage in full flow, capturing the pair in many guises. To some, they are two interesting individuals bringing their life philosophies into a marital pot; to others, she is a bright, vibrant woman who is enjoying the fruits of her success; and then there’s Josh Appignanesi who comes as a brilliant man, caught on a wave that is largely his partner’s creation. 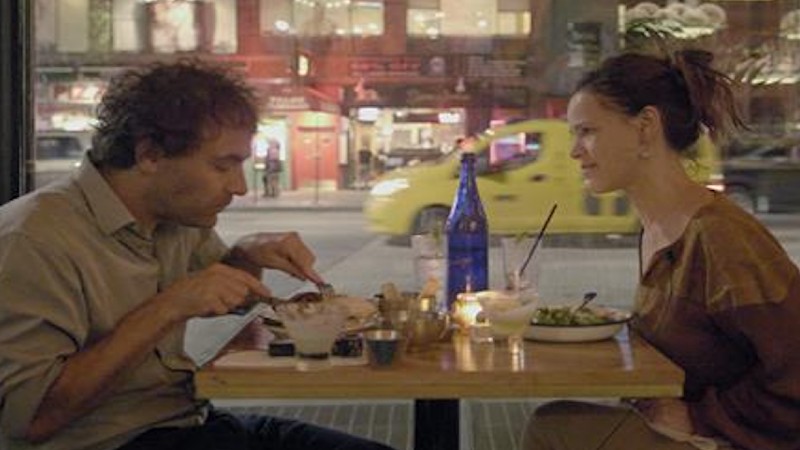 One way or another, Baum and Appignanesi perpetuate stereotypes thought to be antiquated for a 21st century audience, yet they’re remarkably progressive in other areas. Better still, they genuinely seem to love each other, which is evident from the embrace they share at an airport. In many ways, the film is evocative of the brave work John Lennon and Yoko Ono were willing to showcase to the world, exposing marriage as both an exciting outlet and an institution that needs to be worked on if it wishes to survive. Husband is a brave film that flits between fiction and friction, culminating in a product that’s tense but deeply watchable, even if it asks audiences to journey with a couple they may not be particularly familiar with.

Behind the couple, a third character enters. It’s neither a child nor an adult, but a city looming over the pair, that’s as sparky and nuanced as the love they are attempting to grow. It’s New York, a beguiling, bewildering city that boasts a looming shadow over everyone who walks underneath it. As if responding to the towers over them, the couple remember their place in life, structuring their feelings to tailor to the present. New York will stand after you and I have finished our earthly journeys, but the love (or perception of it) depends on the commitment of the people behind it.

Husband is in cinemas and also on Curzon Home Cinema on Friday, February 10th.