"Filthy genius movie"
The real story of a French-Senegalese woman who murdered her baby by drowning on the beach becomes a stunning courtroom drama - in cinemas Friday, February 3rd

The real story of Fabienna Kabou is as tragic as it sounds. One winter evening in 2013, the woman abandoned her 15-month-old Adélaïde on the sands of Berck-sur-Mer beach of Northern France, leaving it to drown as the tide rose. Documentarist Alice Diop attended the entire trial and duly took notes. She then decided to turn the story into her very first feature film. The 43-year-old director changed little more than the name of the characters, however retaining their complex psychology, as well as the morbid details of the crime. The outcome is a gripping 122-minute legal and psychological drama. Not a single one of these minutes feels redundant.

Fabienne becomes Laurence Coly (Guslagie Malanga). She is a quiet and intelligent woman born in Senegal, who moved to France in order to study Austrian-British philosopher Wittgenstein and to become a “thinker”. She starts a relationship and eventually becomes pregnant with a much older married man called Luc Demontet (Xavier Maly). She lives a almost entirely reclusive life. She is never seen outside either pregnant or with a baby in her arms. She gives birth to Lili at home, and it is Luc who takes the infant to the doctor when required. She stays inside the servant’s quarter when Luc’s estranged wife visits. Laurence’s only connection to the outside world in her mother, with whom she talks twice a week. Yet she does not tell her mother about the baby.

The judge (Valerie Dreville) cross-examines both Laurence and Luc. It seems that they once had a happy relationship, but that eventually morphed into something else. It is never entirely clear whether Luc was an oppressor, or if Laurence opted to recoil herself into a shell. Luc does not come across like a controlling man. And Laurence is a bookish and eloquent woman. It is strange that such an intelligent person would allow herself to be manipulated by a man. The fact that Laurence is very economical with words helps neither the jury nor the viewers to reach a conclusion. When she speaks, she is firm yet soft-spoken, in good intellectual style. She often retorts the judge and prosecutor with a mere “I don’t know”. At times she seems callous and calculating. Other times she seems honest and humane. Malanga delivers an ambiguously enigmatic, even hypnotic performance. You can’t take your eyes off the screen when she is talking. 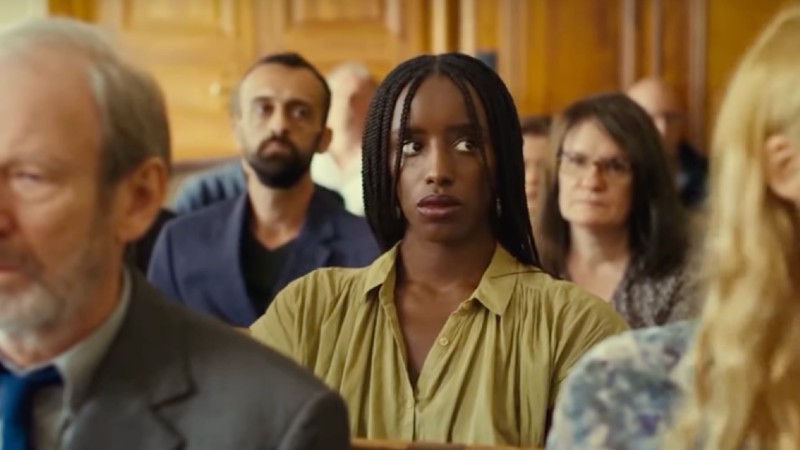 A writer called Rama (Kayije Kagame) becomes the filmmaker’s proxy. She attentively follows the entire trial, always with a notebook to hand. She intends to write a modern-day retelling of the Greek Medea myth about the case. Rama is a black woman who happens to be four months pregnant, and as such she feels some sort of allegiance towards Laurence. She becomes overwrought with feelings of compassion, but also fear and doubt. Presumably, that also extends to the filmmaker Diop at the time to the trial, as she herself sat in courtroom.

Laurence blames her actions on sorcery, a theory supported by her mother (who also attend the trial). The French legal system, of course, does not recognise such defence. Her female lawyer pleads that her client is not mentally sound, and instead asks that she is offered psychiatric treatment. The male prosecutor argues that Laurence is an evil and calculating woman who conveniently alleges poor memory and uses silence in her own favour. It is the women in this film that play the most complex roles. Even the judge is visibly affected by the shocking case. The male prosecutor plays the the most aggressive and unsympathetic role. Someone with no time for subtleties.

The film wraps up with Nina Simone’s Little Girl Blue, her piano and voice inundating the film with vigour and anger: “Sit there, count your fingers/ What can you do?/ Little girl, you’re through/ Sit there/ count your little fingers/ Unhappy little girl blue”. This is no random choice. Nina Simone was an empowered black woman who suffered with serious mental illness, and was a vocal advocate of violence.

Alice Diop’s 2022 film is is a confident incursion into fiction territory. With a flavour of documentary, and a very personal, exquisite twist.

St Omer showed at the 2nd Red Sea International Film Festival, as part of the Festival Favourites strand. It is is cinemas on Friday, February 3rd,

Incidentally, Alice Diop is not related to the also French-Senegalese Mati Diop.