"Greasy movie"
Two young women from Norway find intimacy and comfort... on a chair!!! Unabashedly slow movie is out on Monday, january 30th

Asta (Amalie Ibsen Jensen) lives with her girlfriend Live (Maria Agwumaro) in the sleepy coastal town of Alesund, in Western Norway. Asta works as a journalist for the local newspaper. She is on a mission to find out what happened to an asylum-seeker by the name of Asta, who we never see. The hapless man had been working in Norway for 10 years until he was suddenly forcedly removed from the nation, for reasons that you will discover in the second half of this 79-minute slow-burn drama. He was a very hard worker who fell through the cracks of a system not as reliable as many Norwegians like to think. “We take legal action as a matter of principle”, a government officer explains to the young journalist.

Anders Emblem’s second feature film takes slow cinema very seriously. The camera is entirely static. We watch extensive rooftop views where nothing happens except for the clouds moving in the sky, and the wind hustling sounds. A cat peacefully enjoys its meal. A ferryboat wades through the water while Asta interviews someone about Aslan. Many conversations take place via telephone and as such we never see the reaction at the other end. You have probably heard of Tsai Min-Liang or Eric Rohmer’s films being compared to watching paint dry. Well, in A Human Position, Asta literally watches paint dry for a couple of minutes,. And us viewers are duly invited to join her on such emotional experience. 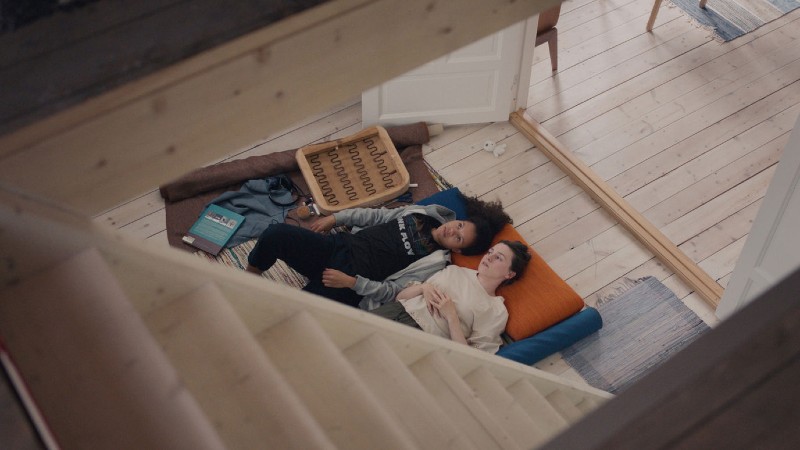 The film title refers to the position that humans take when they are seated on a chair. “No other animal uses that position”, notes Live as the two young women walk down one of the town’s superquiet streets. One of their biggest ambitions is to find a famous Norwegian designer chair that’s a bestseller in Japan. The pettiness of their ambition is a riff on a country where people live very comfortably, with very few obstacles to overcome. Unless, of course, you are an unfortunate immigrant such as our invisible protagonist Aslan. Asta asks her partner: “what is the best thing about Norway?”. “The mountains and A-ha”, she retorts, demonstrating a disinterest or indifference towards the country’s perceived social welfare achievements.

This urgently simple and strangely charming little movie is very pleasant to watch. Viewers are invited to gently dive into the intimacy of the two girls. There are some superb moments of tenderness, particularly when Live plays the electronic keyboard and sings for Asta. And it is in the much-desired designer chair that the two will find absolution, while the current whereabouts of Aslan remain entirely unknown. A moving film. Just not one that will keep you on the edge of your seat.

A Human Position showed in the 2nd Red Sea International Film Festival, when this review was originally written. It was part of the New Vision strand. On Mubi on Monday, January 3oth,