Out of this World (Hors du Monde)

"Greasy movie"
Misogyny and murder engulf a young musician’s life, in this greasy thriller from France - on Digital HD on Friday, December 5th

Stories about troubled musicians have been a constant in cinema since the early days, often featuring mysteriously attractive and very alluring characters trying to find that pathway to success. There is a struggle to be distinctive when creating new stories of this genre though, and it becomes a difficult burden to take on, but Marc Fouchard’s Out of This World is a film that doesn’t apply the usual conventions, instead, it utilises the three M’s – misogyny, murder, and music – in order to create something different. And even though it’s a tad repetitive, and lacks a bit of polish, Fouchard, to his credit, has taken a familiar narrative formula and constructed something quite unique.

This film manifests as a psychological head twister that studies its antagonist, but it is far more akin to a new-wave slasher film, as we ready ourselves for the next fantastical death scene. It is anchored by a career-best performance from Kévin Mischel as the unkempt, eternal fantasiser Léo, who delivers a performance with such gloomy dread that he makes Travis Bickle seem like the pleasant next-door neighbour. Léo has such deep psychological trauma affecting him; his whole demeanour, his mannerisms (he likes to stare, and no one likes people who stare too much), and it doesn’t take long before we bear witness to his acts of devilry – at this point though, it’s almost like a bad habit, like biting his nails.

Set in France, Out of This World revolves around Léo, a shy and struggling musician who is living out of the car that he uses for his part-time taxi driver gig. After a couple of early fares ranging from a nice old woman to an obnoxious phone talker, Léo then drives the deaf Amélie (Aurélia Poirier) to her dance studio, and it is her subtle reaction to Léo’s music – music that has been playing throughout the film’s opening – that strikes a chord with the musician and touches him deeply. It leads to him developing a deep fascination with her that borders the line between a tragic stalker and a hopeless romantic. 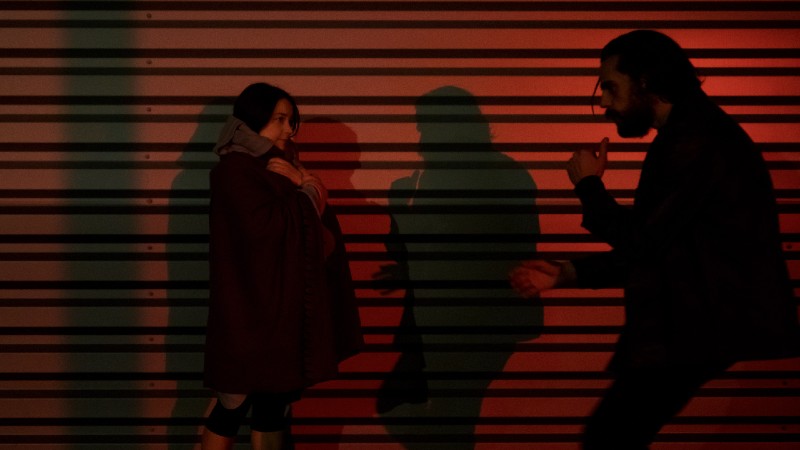 Amidst all the violence and through all that shaggy hair is a love story wrapped up somewhere in this film, albeit and dark and twisted one, but a love story, nonetheless. Two introverted lost souls come together to potentially find happiness, and even with a minor detour, there are signs of a blossoming relationship. But what is the killer (pun intended) of this relationship? Léo’s deep hatred of women might have something to do with it, it’s what fuels all of his murderous sprees. There are signs in the film that his misogyny stems from the fact that Léo was beaten and abused by his mother (a character we see during Léo’s awkward visit to her home) and he has the battle scars to prove it – misogyny meets murder though, it does have a slight ring to it at least.

The film’s shining glory is the camera work and the editing, with Fouchard expertly blurring the lines between reality and fantasy in exquisitely creative ways. It begins with a mix of diegetic and non-diegetic music (which is actually composed by Pascal Boudet, AKA Cyesm) that alludes to Léo’s own fantasia-like existence and the real-life delusions he has about his own music. And with this character’s borderline psychosis, the camera, and the editing work in harmony to portray Léo’s mental well-being breaking down in front of us. It feels chaotic but mostly fresh, and the manic representation of Léo is interesting because of all these aspects working off one another.

But the film lacks a bit of sustenance though, and everything feels very quick; whether it’s the introduction of the “romance” which hasn’t been given enough time to develop, or the heinous acts of savagery that were thrust upon us so suddenly and without any prior knowledge. There’s a lack of background that stifles the characters at times as well, leaving them fairly one-dimensional (especially Amélie, a girl who we know nothing about) and with the stoic lonely character type being one that has been seen so many times, a little bit of substance would do wonders when wanting to create something against the grain.

Out of this World is out on Digital HD on Friday, December 5th.