The year is 1878. Empress Elisabeth of Austria (Vicky Krieps), still known by her childhood nickname Sisi, has a number of maids at her disposal. Their duty consists almost entirely of lacing and unlacing the monarch’s corsage, while also dressing her hair and embellishing her extravagant garments. Elisabeth biggest choices in life consist of deciding what her next hairdo should be. It is little wonder that the 40-year-old – and still very beautiful – woman quietly rebells against the establishment that celebrates but also imprisons her. Her husband Kaiser Franz Joseph I (Florian Teichtmeister) is mostly oblivious to his wife’s dissatisfaction. How could a member of the Habsburg dynasty with every servant of the Austro-Hungarian Empire at her disposal possibly dream of a different life?

While most of us would think that 40 is a relatively young age, we are told that this is indeed the life expectancy of the maids dressing Elisabeth. So, in some ways, Elisabeth is an old woman seeking to reclaim her youth.

Luxembourgish actress Vicky Krieps delivers an astounding performance, blending quiet strength with a profound sense of irony. She has a permanent cheeky grimace on her face, while a glint in her eye is crying for liberation. She speaks at least four languages fluently: German to her husband and most people surrounding her, French to a photographer, English on a trip to rural England and even Hungarian to her daughter Valeria. Sisi is a beautiful and intelligent woman quickly able to win the affection of those around her. Her ostentatious life, however, offers this powerful woman no joy, no redemption. She has a couple of love affairs, one with her cousin in Bavaria and one with a servant in England, but even these romances are mostly lukewarm and insipid, devoid of any real passion. She also has the dull task of selecting one of her husband’s lovers. 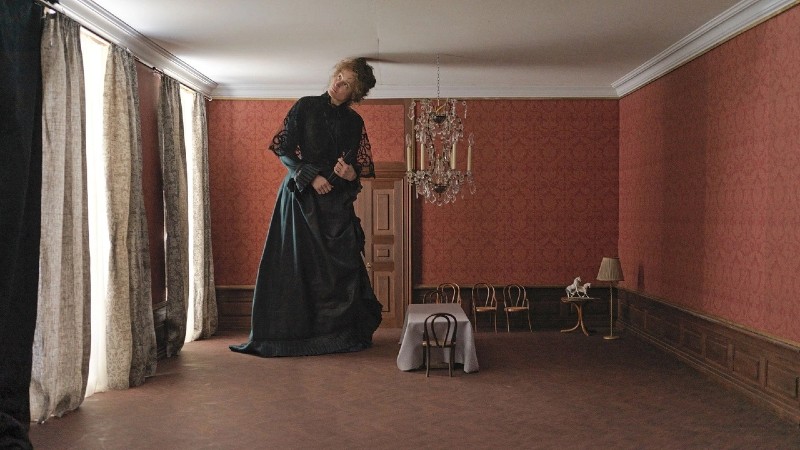 At one point, her husband asks Elisabeth to name “anything she wants”, and promises that he will make her wish come true. She responds: “a Bengal tiger or an extension at the hospital”. Her husband settles for the latter. Elisabeth seems to find genuine pleasure in mingling with physically and mentally sick. At one point, she lies in bed and shares a cigarette with a young male patient, shocking the staff at the hospital. She too suffers from a painful malady: monotony. Her physician offers Sisi a novelty treatment: heroin. He claims that the new drug is “completely harmless”, strongly encouraging the Kaiserin to inject the substance. That’s when her imagination goes wild, as does the film narrative.

Little by little, untimely and absurd elements creep into the story, gently subverting the narrative. A photographer “films” the Empress. The year of 1878 was indeed the year when the first filming was ever captured. However those were images of a galloping horse, and not the sauntering Empress here depicted. This is not a historical inaccuracy. The Austrian filmmaker Marie Kreutzer takes several poetic liberties in the name of the protagonist’s liberation. Non-diegetic 20th century music is heard throughout the film. Then suddenly a diegetic version of As Tears Go By is delivered to the Empress. It is common knowledge that the song composer Mick Jagger started writing music nearly a century later. Incidentally the woman who made the song famous, British chanteuse Marianne Faithfull is a direct descendant from the Habsburg dynasty. At one point, the room and the furniture around our protagonist shrinks (pictured above), and she even embarks on a boat journey on a modern-day vessel. It’s as if the directors was saying: it is necessary time travel into the future in order to provide our protagonist with her eagerly-sought emancipation.

Corsage is in cinemas on Friday, December 30th. All in all, a charming, enjoyable and gently subversive period drama.