"Dirty gem"
This version of Charles Dickens's A Christmas Carol featuring unlikely bros Will Ferrell and Ryan Reynolds is pitched as a quasi-family friendly movie; it plays to fans of Ferrell’s gonzo optimism, rather than to children - in cinemas on Friday, November 18th

Will Ferrell has replaced Robin Williams as Hollywood’s man-child of choice. In his most successful solo outing, Elf (Jon Favreau, 2003) – the best Christmas movie since Gremlins – he won us over with his unfiltered enthusiasm. He is optimistic to the point of behaving inappropriately, working best with stars who challenge his innocence. Enter Ryan Reynolds, who has reinvented himself as the snarkiest guy in the room in the Deadpool movies, who faces off against him in the comedy musical, Spirited, a reworking of Charles Dickens’ A Christmas Carol that squeezes some juice out of the old redemption story.

Director Sean Anders’ premise (from a screenplay he co-wrote with John Morris) owes a debt to Pixar’s Monsters Inc (Peter Docter, 2002) – if you are going to steal from a Hollywood movie, make it a good one. Ferrell plays the Ghost of Christmas Present, a 46-season veteran of successful redemptions of the least likeable people who ever lived, who with colleagues Past (Sunita Mani) and Future (a finger pointing skeleton with the voice of Tracy Morgan), and an incredible amount of research (shades of Nathan Fielder’s TV series, The Rehearsal) turns people around. But Present has standards – he wants to only save people whose conversion to good works will create ripples. Why he does not visit former President Donald Trump is a mystery. Maybe the Apple Corporation who are releasing the film on the streaming service, Apple +, didn’t want to alienate MAGA supporters. At any rate, he persuades Jacob Marley (Patrick Page) to let him redeem Clint Briggs (Reynolds), a slick brand advisor who encourages hate to achieve success.

Reynolds can be insufferably smug. You remember with fondness when Deadpool didn’t speak – see X Men Origins – Wolverine (Gavin Hood, 2009). Here he is dialled down. Clint is savvy and resists redemption by charming Past (off screen) then getting Present to address his own insecurities. Meanwhile, Present tries to show Clint scenes from his past to encourage him to regret some of his behaviour; Clint always has a reason not to. At one point, Clint goes backstage into the Ghost Command Centre and threatens the adult equivalent of ‘2319’ (see Monsters Inc). 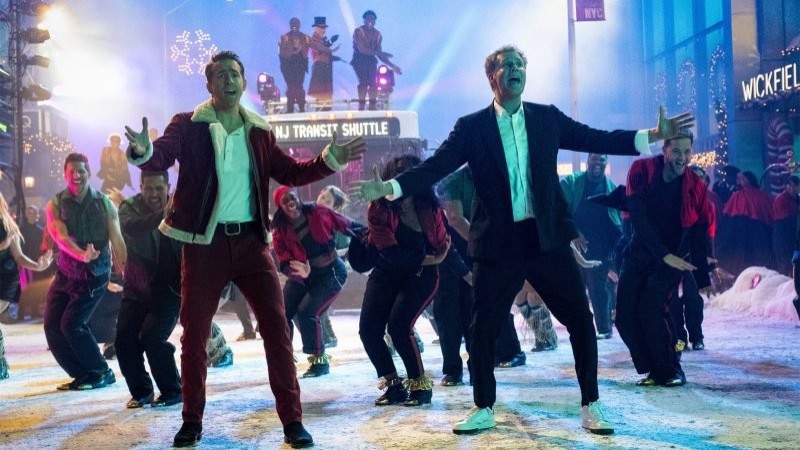 As Present attempts to get Clint’s redemption back on track, the film generates a fair few chuckles. Ferrell and Reynolds are skilful comedians, and the film has its heart in the right place. The song and dance numbers may contain too much tap – foot stomping is an acquired taste – but the songs by Justin Paul and Benj Pasek have enough zip and wit to entertain even if not being instant earworms. (Perhaps no musical produces instant earworms, except maybe Singing in the Rain). On the minus side, Ferrell, Reynolds, and Octavia Spencer, the latter as Clint’s conflicted digger-of-dirt, aren’t persuasive singers. When Ferrell and Spencer duet, ‘The View from Here’, you might think to yourself, ‘why are they worried about what they can see and not what they sound like?’ It’s an own goal not to cast stars with great voices in a musical.

There is a point at which the action takes place in Victorian London, and you fear that the film will turn into an ill-begotten sequel to Holmes and Watson (Etan Coen, 2018), generally accepted as Will Ferrell’s biggest folly. A ‘sick burn’ is a cue for a song that leads to a celebrity cameo and a strategically placed hot air balloon.

Throughout, the film teases the idea that some individuals are beyond redemption; it threatens to become genuinely subversive and realistic. The outcome is reassuringly predictable even though it arrives in a credibility stretching manner. As with many a Christmas movie, there is a cute kid, Clint’s niece, Wren (Marlow Barkley) who wants to be Class President – but at what cost? There is also a tedious joke about a forgotten name.

Apple +’s attempt to establish itself as a viable alternative to Netflix isn’t harmed by this film though the streaming market is over-saturated; there is such a thing as too much competition. However, Spirited isn’t exactly family entertainment. Kids might wonder why they have to listen to actors who can’t sing for $6.99 per month, when they can hear carollers on their front lawn for free? Adults might find more to enjoy with not one but two inter-racial romances. Just don’t tell MAGA.

Spirited is in cinemas on Friday, November 18th.