Jerzy Skolimowski often slips under the filmgoer’s radar, but his name nonetheless frequently appears in the pantheon of veteran Eastern European filmmakers who fled from former satellite Soviet states in the 70s/80s to make a name for themselves across Western Europe, the UK and the USA. A versatile artist, painter, actor, filmmaker, he has left behind a trail of unique, if not always challenging and unusual films, gifting us with cult classics such as the Belgian production Le Départ (1966) with Jean-Pierre Léaud, the seventies British horror Deep End (1970), and a personal favourite of mine, The Shout (1978), starring Alan Baites, Susannah York and John Hurt. A countercultural filmmaker by nature, regardless of context, his 1981 anti-Stalinist Hands Up! was famously banned in Poland, forcing him to take refuge in London’s (not unpleasant) ‘swinging sixties’, where he is rumoured to have been neighbours with no other than Jimi Hendrix.

This year, Skolimowski hits headlines again with a Cannes Jury Prize winner, EO, which may be described as a return to form for a director whose style has always been one of challenge and surprise, even if at times failing to gain critical recognition. An homage to Robert Bresson’s 1966 Au Hasard Balthazar, EO is at heart a road movie which gives its titular role to a melancholic donkey who becomes the relentless focal point of the entire narrative, the filter through which the world at large is considered and depicted.

In truth, at times, EO struck me as being closer to Bresson’s L’argent (1983), in the way that it recurrently depicts one object, or in this case, a donkey, being thrown about, exchanged and passed on from one owner to the next, from solitary heroine to lonesome hero, from horde of hooligans, to army of butchers, crossing forests, rivers and vasts portions of land, abandoning Poland, and finally reaching Italy. But whereas Bresson’s focus was always on the ‘human drama’ that accompanied each of these exchanges, Skolimowski’s drive here is to present us with the expression of a truly animal condition, that is, a condition always relative to human culture, but one that expresses a fundamental resentment towards humanity, and alternatively, which offers a deep understanding of animal dignity. EO’s pan-European journey makes manifest the brutality and absurdity of human culture, the sickness inherent to humankind in the way that it continuously nurtures a depraved relationship with itself and with all living beings. Immersed in a donkey’s visual field, the natural order gets entangled with the cultural, and the dividing line between the two begins to blur – at the end of the day, the human is different only on aesthetic grounds. 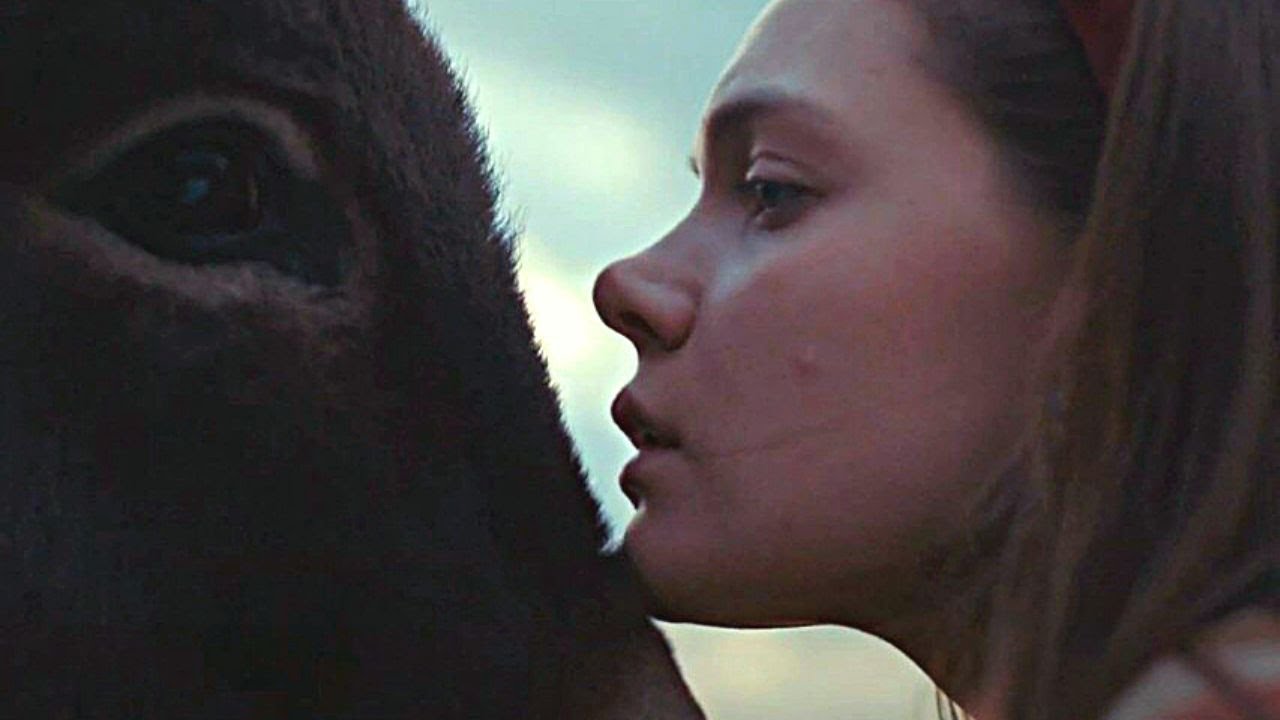 Hypnotic and vigorous at times, if not heartbreaking, EO pulsates with energy. It gives off a sense of great aesthetic freedom by frequently cutting away from its admittedly simple narrative to immersive and slightly experimental set-pieces, where, for instance, viewers run alongside slow-moving stallions across fields, or glide through drone shots travelling at great speed across forests of red mist. The camera at one point even mimics the movement of a wind turbine, as the shot ends with a bird struck by one propeller in its flight.

Since the story is one of silence and contemplation, music and sound play pivotal roles, with a score not only winning the Cannes soundtrack award, but also reminding one of the old exuberance of classic orchestral scores. In addition, it is with the sound design that Skolimowski takes his ‘donkey odyssey’ truly further than Bresson’s, with changes in the sound design indicating shifts in the perspective of the donkey, depicting layers of immersion into its perceptual apparatus. This meticulous attempt to capture the donkey’s sight/ sound panorama is escorted by a truly captivating performance, by not one, but multiple donkeys (credits at the end show various names for EO). Whether the donkeys can act, or whether we are witness to a 21st century Kuleshov effect, where audience members project their feelings onto an expressionless slate, is irrelevant.

As a final note, where the animal drama succeeds, the human stories falter terribly. Some are reduced to the most obvious clichés, some are left without much inspection. While one may appreciate the general disinterest in human narratives, for the sake of concentrating on the animal order, the interconnections between humans and animals could have been given more scope — what is the circus ritual that the young lady performs with the help of EO in the beginning? Moreover, the seemingly arbitrary appearence of Isabelle Huppert towards the third act feels like a desperate last-minute attempt to hold on to viewers’ attention, and finally, the short subplot that hints at an incestuous relationship seems gratuitous and purposeless. By the end of the film, Skolimowski’s narrative tricks start losing steam, and the story, substance.

EO is currently playing at the Tallinn Black Nights Film Festival, and will be released in the UK on February the 3rd.