Kanaval: A People’s History of Haiti in Six Chapters

"Dirty gem"
A succinct and engrossing new documentary which shows a nation desperate to exorcise the ghosts of history through the celebration of the Kanaval - in cinemas on Friday, November 11th

This enlightening new documentary unfolds as a rapid lesson through the history of Haiti, scanning centuries of conflict in the blink of an eye. Told over the course of an hour, in six chapters, the duo Leah Gordon and Eddie Hutton Mills portray their People’s History of Haiti through the prism of the Kanaval, a yearly celebration fundamental to Haitian identity, designed as an act of national remembrance and as a remedy for the burden of history.

For Haiti’s history is far from insipid. Indeed, we are guided through a bloody tale of colonisation, genocide, displacement, slavery, revolution, debt, corruption, dictatorship, leading to more revolution… The Kanaval is the thread which animates our historical wanderings, each troupe in the processions depicting a particular historical period, event or personage.

One troupe shows members covered in black paint, as an homage to a series of meetings that took place before the famous Haitian revolution where proto-revolutionaries painted their skins in black in order to gather at night without being spotted by the regime’s watchmen. Indeed, in the late 18th century, the Haitian slaves were quick to grasp the significance of the French Revolution, and initiated their own revolt, culminating in over a decade’s battle for freedom, from 1791 to 1804. Today, the Kanaval’s mass of black-painted bodies serves thus as the symbol of a unified population striving to overthrow slavery. 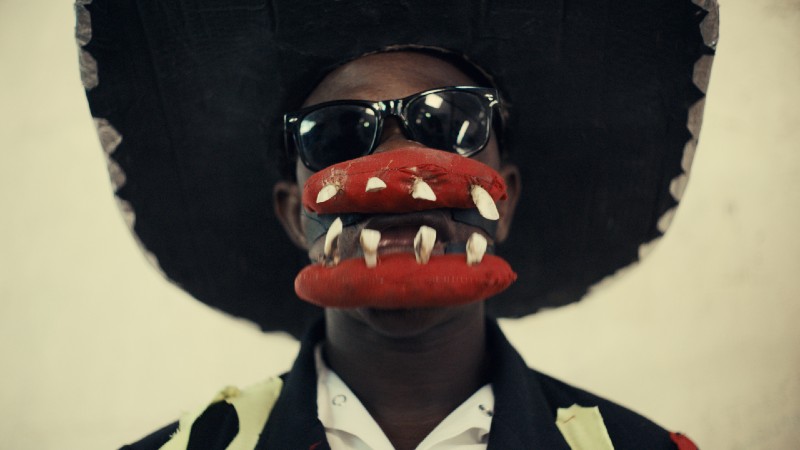 As the film unravels, the Kanaval presents itself as a stage where the symbols of the collective Haitian unconscious come to life. While the carnival scenes take place in the land of allegorical dreamscapes, the viewer is struck by the brutality and violence of certain mise-en-scènes: a black beast agonises under the whip’s lashes, representing the abused and nameless slave; the ‘Coffin Carriers’ are meant to cradle the corpse of the nation, unable to survive under the pressure of a hostile world; the striking figure of the zombie, as opposed to the one represented in Western TV/ cinema, here becomes another distorted image of the slave, lacking in education, in training, nameless, sleepwalking and half-dead. While some scenes expose a clear anxiety surrounding the future of the nation, other scenes seek to underline the necessity of an institution such as that of the school.

Beneath the elaborate costumes and the papier-mâché masks is a yearning to make manifest the aching of an entire population. To convey this, the film is presented to us in varying formats: it cuts from lush widescreen black-and-white footage, showing day-to-day realities and Haitian street life, to colourful 16/9 images showcasing the processions themselves, where rituals, dances and costumes throw the entire nation into a state of trance. Varnished with an inspiring soundtrack, this dynamic film fulfils its mission to offer viewers a succinct and engrossing history of a country desperate to exorcise the weight of history.

Kanaval is in cinemas on Friday, November 11th.