"Greasy movie"
A mother and a son wage a proxy war between science and denialism, bringing a complex ideological struggle into the heart of a small family

Soft-spoken and kind Ash Steadman (Tom Rouvray) lives with his the angry and formidable mother Sabine Steadman-Buttler (Stacha Hicks), somewhere in urban England (probably London). The young man is a devout university student, keen on Aristotle and committed to science. His mother is a self-appointed “freedom-fighter”, who actively campaigns against mask and vaccine mandates. She claims that she used to work in the medical industry and asserts that “no vaccine has ever worked”. They represent the two opposite facets of the deeply polarised world that existed during the Covid-19 pandemic. The problem is that they share a house, and they views are so irreconcilable that peaceful co-existence becomes inviable.

Sabine isn’t the picture of a doting mother. A young Ash observes his fragmented mother through a kaleidoscope in the first sequence of the film, during the year of 2004, symbolising and anticipating the fractious relationship that would prevail two decades later. One day, the two inevitably come face-to-face in the public eye, as Sabine delivers as a diatribe laden with fake news and conspiracy theories. She is literally on stage, with a medium-sized crowd of ardent denialists cheering her on. 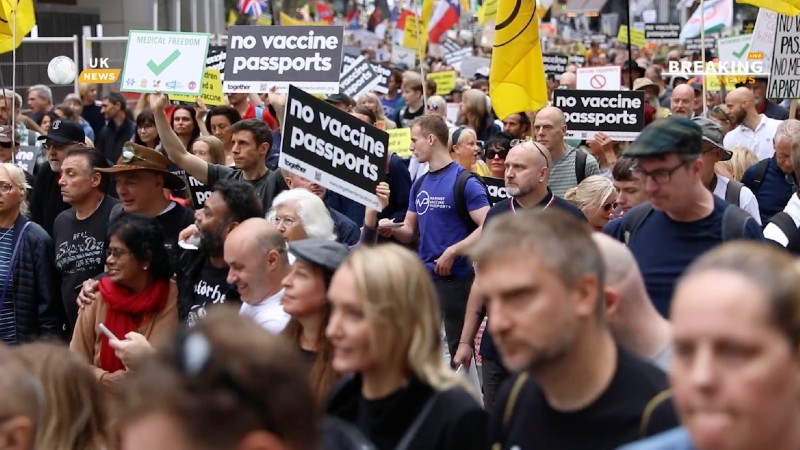 Ash wishes to confront his mother in front of her supporters, his friends preventing him from doing so. Should our young protagonist engage in an open duel with the very woman who raised in nurtured him? His actions will shock and appease the UK in equal measures. Finally, Ash goes on national television in order to ponder the consequence of his actions, and the importance of vouching for the truth.

In just 18 minutes, My Mother’s Son raises vital questions about the nature of conspiracy theories and our intimate relationship with the champions of post-truth ideas. Ash and Sabine perfectly embody the two years of ideological warfare that the Covid-19 pandemic brought upon us. The enemy isn’t always far away. It could be someone of your own flash and blood. The movie does not endeavour to answer all the complex questions, leaving instead viewers to reflect about their own principles and personal connections. Now that the pandemic is over, times have once again quickly changed. Yet conspiracy theories after here to stay, firmly etched on popular opinion. Is it perhaps time for reconciliation?

My Mother’s Son showed at Sunset Screening Sessions and also at the Cork International Film Festival. Stay tuned for a VoD launch.