Roughly divided into three parts (Carl and Yaya, The Yacht and The Island , Östlund’s new film starts out as a credible dysfunctional romance before gradually slipping into comedic absurdism. In the first scene, we see numerous half-naked, extremely beautiful men. They are male models. One of them is Carl (Harris Dickinson). An agent jokes about these men earning a third of their female counterparts, while also having to manoeuvre amongst raunchy homosexuals, in the film’s first attempt to subvert gender relations. They are asked to look happy (H&M look) and grumpy (Balenciaga look), the first comment on class. This is the film’s best scene, both hilarious and credible. We then meet Carl’s girlfriend Yaya (Charlbi Dean).

The young and gorgeous couple constantly bicker, primarily about money, but also about other men. Carl is pathologically jealous. He is the picture of toxic and fragile masculinity. He is very confident about his looks, yet he grapples to accept that his partner makes more money than him, and that she may find other men attractive. The second part of the film begins as they embark on a yacht cruise with the supermegaultrarich. Yaya, who happens to be a powerful “influencer”, somehow won the trip. This is where their relationship is tested to the limits. Carl is often contradicting himself. At one point, he walks into the yacht luxurious salon half-naked while demanding that a member of the crew should wear a shirt (precisely the man who Yaya found attractive). He immediately proceeds, still half naked, to shop for wedding rings for Yaya, the first price tag coming a whopping €28,000. But money is never a problem in this small world populated by grotesquely wealthy and ostentatious people, always supported by a sycophantic member of the crew.

The other passengers include a bizarre Russian couple. The man is super-capitalist who engages in a profound debate with the Marxist captain Thomas (Woody Harrelson). their conversation is doused in copious amounts of alcohol, with tragic consequences for the other passengers. His wife demands that all members of the crew (including the invisible ones in the kitchen) use the water slide. An elderly British couple owns the business that manufactures the hand grenade as we know it. But their life has not been the same since regulation prevented them from churning their favourite product: the landmine. Poor guys, unable to sell their most valuable good. A single male strikes an awkward conversation with Yaya and another woman only to claim that he has more money than anyone can imagine. The music in the background and a trite and never-ending version of rich club anthem Lady (Hear Me Tonight) by Modjo. A seemingly stroke-afflicted female passenger can only say two phrases: “nein” and “in den Wolken” (German for “no” and “in the clouds), which she repeats ad infinitum. Everyone and everything is bizarre and awkward. 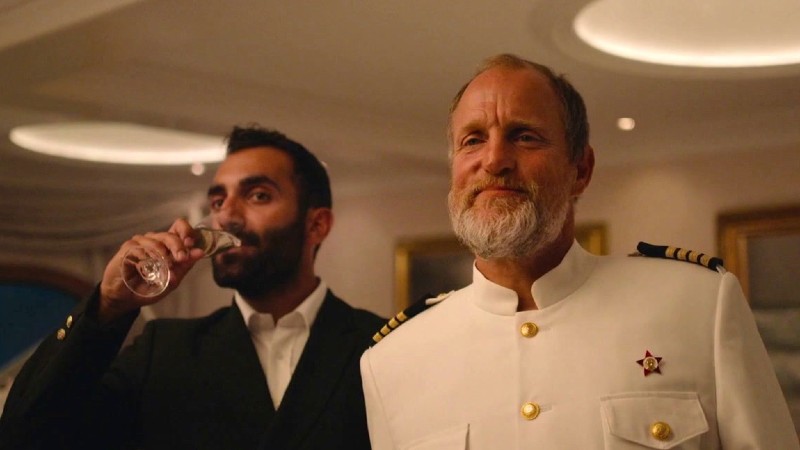 The irresponsible actions of the captain combined with extremely temperamental weather outside culminate in a disastrous dinner. Scatological humour prevails. It is indeed funny to watch these repulsive characters slide in vomit and shit, excrements that beautifully symbolise their values. But it isn’t the captain’s misadventures that eventually bring down the yacht, but instead the actions of local pirates. Ironically, the criminals use one of the products manufactured by the filthy rich British couple. The third part begins immediately after an inevitable explosion. The problem is that the third part of the film is so absurd and caricatural that The Triangle of Sadness loses its effectiveness. Any attempt at comedic effectiveness sinks with the ship at the end of The Yacht segment.

The topic of gender, race and class power relations are consistent throughout the film. In the third segment, it is toilet manager Abigail (Dolly de Leon) who becomes the captain. That’s because she’s the only one able to fish and make a fire, vouching for the survival of the few passengers who managed to swim to nearby island. She manages to subvert all power relations: a poor, Latin and female character is the ultimate winner. And she’s never afraid to demand her prize.

All in all, The Triangle of Happiness is an effective comedy, is a little too long at 140 minutes, with some very good moments but also a mostly redundant ending. In this sense, it is very similar to Ruben Östlund’s The Square, which won the Palme d’Or at Cannes just five years ago. I see no reason why a film that offers virtually nothing new should receive the same accolade as its predecessor. Sadly, I couldn’t make it to Cannes this year, yet I like to believe that they had far more interesting and also dirtier movies upon which the Festival could bestow its highest award.

Triangle of Sadness is out in UK cinemas on Friday, October 28th.

You won't die laughing with this extremely long, caustic and strange Scandinavian comedy, but the movie does have some arresting and clever moments - Palme d'Or winner is in cinemas Friday, March 16th. [Read More...]

A teenage hopeful comes from the sticks to London’s Soho and finds himself working as a rent boy talking to punters about paintings - on VoD on Monday, December 10th [Read More...]