"Mostly clean movie"
A disappointing entry from DC Comics, they abandon intellectualising their audiences in favour of a hackneyed spectacle that won't entertain the most sympathetic of moviegoers - in cinemas on Friday, October 21st

Considering the identity crisis DC has suffered since parting company with Zack Snyder, this film is impressively sure of itself. Sadly, that isn’t a compliment, as the film suffers a fascist undertone that makes it virtually unwatchable. If you love the basic superhero format – stuggle, conquest, explosion, finale, bow – you’ll find a film that that could make a rainy Saturday more bearable to sit through, but there’s no denying that the film is preposterous, overblown and directed with a smug arrogance that won’t win them any favours in the long run.

Dwayne Johnson stars as the eponymous hero, gifted powers by Egyptian Gods, which makes him a threat in the eyes of the Justice Society of America (JSA), a quartet of powerful beings who are determined to protect the earth against all evil. But Black Adam doesn’t view himself as an evil, which is why the film resorts to a series of propulsive fight sequences between the titular tyrant and the four assailants, in a last-ditch attempt to market DC to a more populist audience. The film focuses on the pyrotechnics, CGI and explosions, forgetting to give the stars anything worthwhile to do.

Which is more the pity, considering the power of Joker (Todd Phillips, 2019) and The Batman (Matt Reeves, 2022), portraits of a broken society driving its characters into fantasy induced mania. Black Adam has no such ambitions, but carries a more simplistic, albeit jingoistic, depiction of heroism in a world that has seen too much of it. Out of the ensemble, only Pierce Brosnan seems to be enjoying himself, giving much of his spontaneous talents to the proceedings, as the others ruminate and monologue as if they were performing Shakespeare at the Royal Albert Hall. 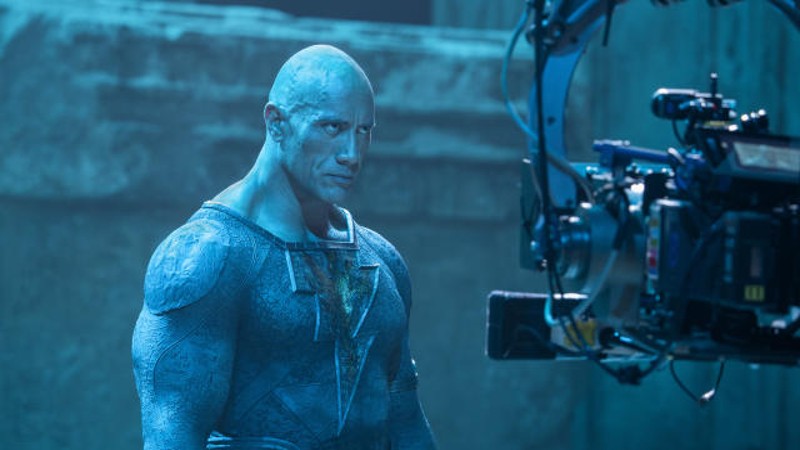 The film also features Sarah Shahi, although the actress has shockingly little to do, which scarcely helps the argument that comic book movies are doing anything to write powerful female characters. Viola Davis walks in for paycheque, barely mustering enough interest to make Amanda Waller seem anyway interesting. And Johnson is just hopeless. This is his biggest film to date, and he’s completely out of his depth, delivering each of his lines with the conviction of an out of work actor delivering their lines in the panto in the hope of paying their beers for the next week.

Audiences deserve better, and although the prospect of a sequel featuring a fight with Superman is tempting, it’s not enough to merit DC as anything more than Marvel plagiarists (although recent Marvel efforts have been wanting, precisely because they’ve produced too much in too little time). If this is the arena we’re heading into, then I say save your money, and go to a theme park where you’ll enjoy the thrills of a comic book movie, without sitting through hours of agonising acting.

Black Adam is in cinemas on Friday, October 21st.

Put on a happy face. Batman spinoff is a remarkable origin story / character study of one of that franchise's great villains, starring Joaquin Phoenix - on Amazon Prime (and now also on Netflix) [Read More...]

The Marvel Cinematic Universe delivers its first film with a female protagonist, in one of the most anticipated movies of the year - in cinemas from Friday, March 8th [Read More...]