After undergoing some moments of harrowing reflection, the film’s central lead Vinny decides “enough is enough”, and throws himself into first gear. It’s time to put himself first, and follow his heart. What emerges is a film that flirts between Wes Anderson-esque parable and full blown Bollywood epic, although the film boasts a flavour that’s firmly it’s own making. Determined to interrupt, disrupt and full on stop the wedding of his ex, Vinny hatches a plan that seems foolproof, only to recognise the folly early on.

Four Samosas works on several levels: It’s a hilariously well written script, bolstered by some colourful (nay, kaleidoscopic) set pieces, that never attempts to discriminate against even the most basic of intelligence. Indeed, it’s frolicsome fun for all the family, and at this time of great political uncertainty (lest we forget the war that is still going on in Ukraine), it’s high time Britain has something fun to watch. The fact that it stars an Asian American in the central lead only makes the whole thing more deliciously appropriate.

Beautifully produced, and filmed with tremendous attention to edits, the film punches along at a furious rate, quickly establishing the dilemmas and narrative threads in the first few minutes. The adage “time is money” has rarely been truer, and Four Samosas epitomises every frame for the purpose of the whole. And yet the director is confident enough in his ability to have some fun, offering a selection of giddy setpieces that demonstrate the intricacy and the silliness of the heist in question. 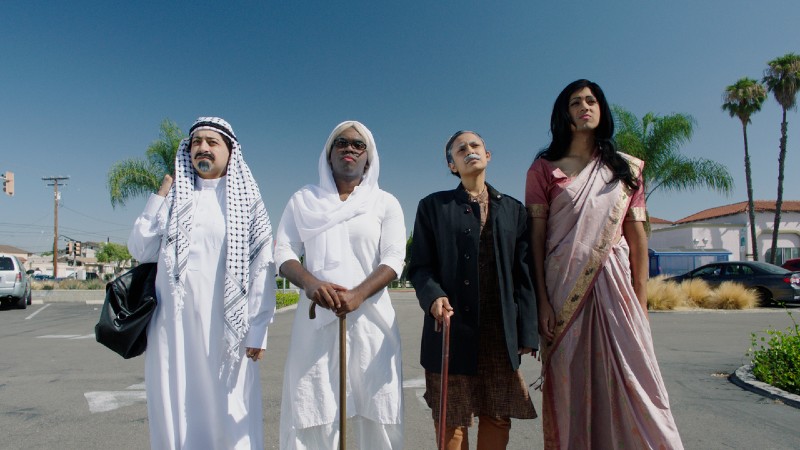 Director Ravi Kapoor grew up in Liverpool, which is interesting, because there are elements of the film that bring The Beatles frenzied Help! (1965, Richard Lester) to mind. The one liners zip along, much as the camera hurdles from angle to angle, as the characters bounce across the frame with vaudevillian ease. It’s a very silly affair, but done with so much attention to the merriment of the audience that it’s easy to get lost in the script.

Word to the wise: watch this on the big screen. It exudes colour, allowing the greens, reds and yellows to capture the entirety of the viewer’s attention. It does lean closely on its Andersonesque influences, yet does so by allowing the script to tell an entirely new kind of story to the fables regularly presented by the Texan native.